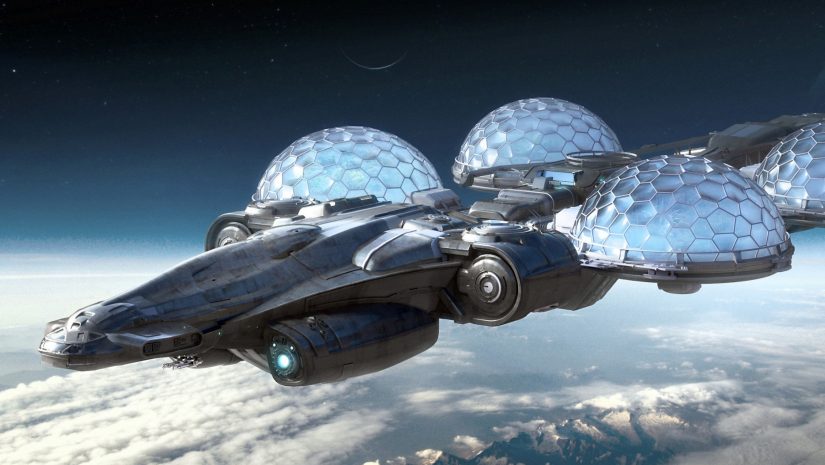 Third installment to our '60 mins' style fiction pieces we've been writing of late. Again this was co-written by the awesome Nehkara, hope you enjoy.

Welcome to the newest edition of Tic-Talk, the transcript that follows is the full interview as conducted by Indira Nooyi with our guest interviewee, Theodore Felix-Grafton, local farmer from Goss I and former captain of the Nightingale. Interview was carried out on the planet Goss I on 2947-03-28.

Indira Nooyi(IN): Good evening and welcome to another edition of Tic-Talk, for our traditional viewing audience this will be a bit of a departure from normal as this interview will be pre-recorded for the convenience of our current guest of tonight’s segment. Today I’m on the planet Goss I touring the farming operation of Theodore Felix-Grafton. Thank you for inviting us to your home, we really appreciate the chance to interview you today.

Theodore Felix-Grafton(TFG): Well miss, the pleasure is all mine. Not every day a pretty young reporter visits this old man.

IN: Well, we are here to highlight your unique story Mr. Felix-Grafton...

IN: Very well, Ted. Now your name came to our attention in a very indirect way, the producer of Tic-Talk heard about you from a neighbour of hers who told her a very interesting, wild story. Her neighbour maintains that you saved her life 22 years ago, from the Orion system. The thing that very much intrigued us at Tic-Talk tonight about this story was that, nobody has heard of this or even known about it until this very moment. I would have to say my very first question would be how do you think this managed to stay under the radar for so long? Cause you rescued how many people, Ted?

TFG: Well, what I was doing wasn’t precisely sanctioned by the UEE. I was doing it to help people but I wasn’t sure how it would be received by the higher ups, so I asked those I saved to keep it a bit quiet. You know, not a secret to their friends and family but I asked them not to tell the media and such. My crew and I saved 47 people. Took some hits on our way out too… you can see some of the burns on Nightingale’s hull… like that one there.

IN: So, these biodome pods you’re showing me now, once was the ship that took you to Orion system to save these 47 people?

TFG: Interestingly, no. I couldn’t go in to Orion for this mission with biodome pods strapped to Nightingale… that just wouldn’t do. So Indira... may I call you Indira?

IN: Of course, please do.

TFG: So Indira, I called upon my dear friend Jack O’Leary who ran a Hope-class Endeavor named Mercy. He lent me his medical and landing bays for this mission. Interestingly these biodome pods have been here since then… I decided to bring Nightingale down here instead of bringing the farm pods back up… in the end. The rest of the buildings you see here are actually her, my ship.  Still protecting me.

IN: Still living on, I’m sure she’s a comfort to you. I’m curious to know though why you decided to more or less invade the Orion system, risk discovery and possible death from the Vanduul, to rescue these people. Were they family? Friends? Was there a personal aspect that motivated you to do it?

TFG: An old Genesis pilot I met in a freezing shithole of a bar in Oberon… I think the planet is Uriel? Anyway, he mentioned that he had heard from a reliable source that there were still folk stuck in Orion. Indira… two centuries of scraping together a life under constant threat of attack at any moment from the fucking Vanduul. Once I heard about those poor people I had to do something. But I’m not a fool. I checked with every source I could find and it seemed like the rumours had merit… that those people were actually there.  I thought I could help. Might’ve died trying, but what good is this ‘verse without people willing to help those who need it?

IN: Very brave venture you undertook. Many of those families have been hiding or existing in Orion for generations now, the progeny of the original groups the UEE left behind when they vacated the system long ago. How did you know they wanted to be rescued or more to the point how did you get in touch with them to let them know you were coming? It otherwise might have been difficult to organize such a rescue.

TFG: That’s the thing Indira, I couldn’t. I couldn’t risk the whole thing by broadcasting wide. I thought long and hard about it. If you were living in a place where you could die at any moment, even if it was home, wouldn’t you consider leaving so you and your family could be safe?

IN: I would think so, but many of those families have grown accustomed to living stealthily. So, the 47 you rescued I would assume are the people you managed to either persuade to come with you or came of their own volition. Did you meet any Vanduul resistance either entering or leaving the system?

TFG: Yeah… I was younger and a bit brash. I was going to Armitage to save people. If I had actually made it there I probably would have got everyone killed.

As it turned out, during our pass by the main asteroid belt in Orion we got the luckiest and faintest hit on our sensors. We were a mite jumpy so at first we were sure it was the Vanduul come to tear us apart, but it became obvious after a few moments that it wasn’t anything of the sort. Turns out that a group of survivors from long ago had hidden out in the asteroid belt and eventually constructed a small space station out of several damaged ships and whatever scrap they could find. They had done a good job shielding it from scanners but the rickety thing was malfunctioning at that moment.

IN: Sounds like a good bit of luck followed you into the Orion system. So, when you discovered the ‘space station’ did you manage to communicate with them or did you just send someone over to investigate?

TFG: Still concerned about transmissions, I decided to just dispatch the ambulances from our bays to make contact.

IN: And in doing so you found 47 survivors, and from what I’m hearing you arrived just at the right time before their current habitat started to fall into further disrepair.  Once you managed to dock with the station, you were able to evacuate the station and escape the system unscathed then?

TFG: The folks were happy to see us. A bit wary, you understand, but once they knew fellow humans had come to help they were thrilled. They all came back with us. At that point the ship was getting very cozy… we had a total of 63 aboard. That was enough and from their tales it sounded like Armitage was a fool’s errand.

Nightingale headed back for the jump point to Caliban but part way there we got the attention of a Vanduul patrol. They gave us a few scars for our efforts, though we ultimately were able to hold them off long enough to get through the jump. Caliban is no picnic either but thankfully we got through to Oberon unscathed.

IN: Sounds like quite the adventure, Ted and I’m sure those 47 were unendingly grateful to you. I have one final question for you, after all that… what possessed you to give up a spacefaring life for that of a humble Goss farmer?

TFG: They were grateful. They were. I was too though. It was the most exciting, nerve-wracking, and meaningful event of my life. That event grew some of my most cherished friendships. I still keep in contact with many of those folks. Interestingly, I actually married one of the survivors. Her name is Florence.

Honestly after that I just felt that my adventuring days were over. It was time to come home, settle down, and do some work on the ground for once. For me at least, when it came down to it, I felt better to belong to a place. We’ve built a good life here, a nice place, don’t you think?

IN: Indeed, it’s a very idyllic place to settle down and your story was not only inspiring but also shows that humanity can still do good things. Thank you for your time, Ted. I’m Indira Nooyi and this has been another edition of Tic-Talk, thanks for joining us and see you next week.