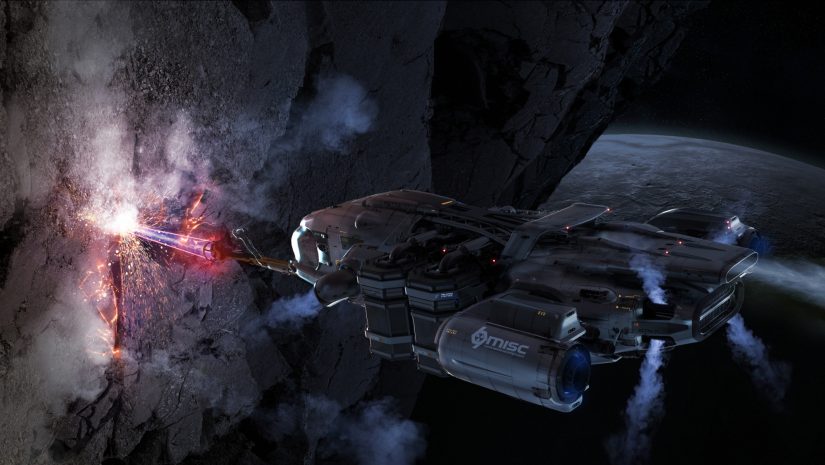 Today's fiction offering was cowritten by the fantastic Nehkara. I hope you enjoy!

Welcome to the newest edition of Tic-Talk, the transcript that follows is the full interview as conducted by Indira Nooyi with our guest interviewee, Elias Portwin, captain and operator of the Bolide. Interview was carried out at the Central Advocacy Detention Centre in the Ferron system on February 14, 2947.

Indira Nooyi(IN): Good evening and welcome to another edition of Tic-Talk, I’m your host for the evening Indira Nooyi and with me tonight I have the captain and operator of the mining ship, the Bolide. Thank you for granting us this interview, Mr. Portwin.

Elias Portwin(EP): Uh… It’s my pleasure ma’am. It’s just good to be able to tell my side, you know?

IN: Indeed and we are looking forward to giving you the opportunity to tell your side. Now… Mr. Portwin, please tell us a bit about yourself. Where are you from? How did you become a miner? A few personal details of that nature.

EP: I’m from Tram, on Asura, here in Ferron. Things are tough there… but there’s still a lot of mining know how to go around.  My family were some of the lucky ones, still have a bit of money. My parents made a living off of refurbishing and selling used mining equipment. I worked with my folks until I had enough credits for my beautiful Bolide.

IN: Thank you. For those folks unfamiliar with the events that have brought you here tonight. Could you in your own words give our viewing audience a little backstory on what happened?

EP: Well, ya see, I’d had a few run-ins with the Chomper crew. They were always tailin’ me, because I actually know how to find the veins. They’re a gang of talentless thieves, they are.

Anyhow, I had uncovered this beauty cluster of platinum asteroids here in Ferron and I was ‘bout to start up my drillin’ when along came the fuckin’... wait, can I swear?

IN: Well, this is a live feed and would prefer if you kept it to a general tone in terms of language, please continue. You mentioned a vein of platinum...

EP:  Yeah… yeah. I’d found some nice platinum asteroids out on the ragged edges of Ferron. Along came Chomper to try to push me out. Ya see, Orions have weapons. Not much a little Prospector like Bolide can do to defend a claim. I sure don’t have the credits to hire mercs.

I had had enough, ya know? It’s hard enough gettin’ by out there in the black all by your lonesome without a monstrosity like that breathin’ down your neck. So I decided to do something about it.

IN: I see, but Ferron is a system open to trades like miners such as yourself to scout and claim these precious resources. So the Chomper, Orion mining vessel, had equal opportunity and rights to chase the same veins of resources you yourself were. I guess my question would then be, did you consider what it would mean for yourself if you decided to take the situation into your own hands?

EP: With all due respect Ms. Nooyi, I don’t think you know what it’s like out there. Code among miners is that if you discover a claim and are actively mining, that’s yours. Full stop. They just waltzed in there throwing their weight around… like they always do. Did I consider what it would mean when I ruffled their feathers? Honestly, not really ma’am. I was angry and fed up.

IN: Such rash action has in turn brought you into Advocacy custody waiting to hear whether or not charges are going to be laid against you or more than likely what charges will be brought forward. So in your eyes, was it worth it in the end?

EP: You don’t pull your punches, do ya miss? I… well, you know, at the time it was pretty rewarding to finally get a chance to stand up for myself.  But I know it was wrong.  And was it worth it, really? No… not in the end.

IN: Just for the record, do you know of or are you acquaintances with the Chomper’s captain? I know in some of these industries you run across the same people from time to time. It wouldn't take much to build a small personal grudge if one was rubbed the wrong way on a prior occasion.

EP: Yeah, I know him. As I said, we’ve had some run-ins. He’s always on me because I’m good… makes the life of his crew easy to use me as a dowsing rod. We’ve had words… many times. I was tired of bein’ used.

IN: It would then not be much of a stretch to say that this was more or less a simmering pot ready to boil over. I can understand how frustrating this whole situation could have been for you and in the end I think you can probably count yourself lucky no lives were lost during this incident.

Now that we heard your version of events in your own words, I would like to just get some clarification on how things unfolded. To my knowledge, it was stated that you maneuvered an asteroid into the Chomper which then caused significant damage. Could you please elaborate for me not only how you managed that but what gave you the idea in the first place?

EP: Yes ma’am. Well, you see… I love the Bolide but she comes equipped with just the one set of small guns up front. Not much protection and completely useless to actually attack anything. So I had to come up with somethin’ more… improvised.

I discovered awhile back that if you pour energy into your front shields and are very gentle with the initial contact, you can actually push asteroids with the Bolide. I settled her nose into an impact crater on an asteroid about half the size of the Orion. I poured my power into shields, engines, and a bit into the tractor to keep the rock tight to the shields… and I pushed it right into Chomper. Those Orions are like freakin’ space whales. They can’t move worth sh… uh… worth anything.

It smashed right into them, wrecked their engines before they could do anything about it. I knew I want you to know… I knew it wouldn’t destroy them. I didn’t want to. I just wanted to push back a bit… stand up for myself.

IN: Since you’ve now had a chance to tell your side of the story, what was your reasoning for accepting this interview? Aren’t you concerned the information you gave today can be used to incriminate you?

EP: Ms. Nooyi, I haven’t hidden anything. The sensor data from Chomper, the sensor data from Bolide. It’s clear what happened. I’m not going to avoid punishment. I hope that the judge in my case will take into account the history involved but there’s no need to try and twist the truth. I’m glad no one was hurt. I just wanted a chance to tell folks my side of what happened. Thank you for giving me that chance ma’am.

IN: Thank you for sitting down with me this evening, I do wish you the best of luck going forward. I’m Indira Nooyi and this has been another edition of Tic-Talk, thanks for joining us and see you next week.