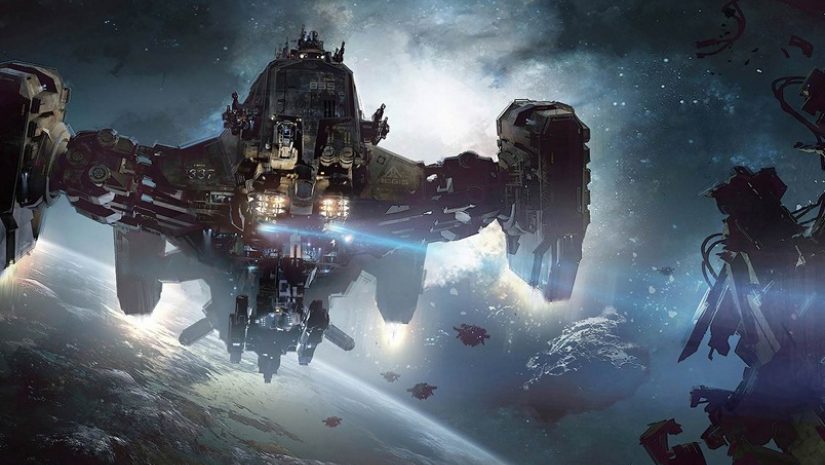 It’s a struggle to continue the session, a struggle to keep pushing .  Part of me wants to give up, to let go and run away.  But the rest of me knows I can’t.  I’ve gotten this far, I have to keep going, keep talking.  I’m so close.

‘I loved him, my partner.  And he loved me back, I think.  It was hard to tell, sometimes, but he was good to me.  We were good to each other.’  Memories of him flash through my head, unbidden.  Strong arms, dark hair, a broad chin and a broad nose.  He had strong features.  I used to make fun of him, call him my big gorilla.

Breathe in, then continue.

‘I worked through most of the pregnancy.  Long hours, they come with the job, and back then…back then it was just the two of us.  We couldn’t take breaks.  We had to work, all the time, had to grow the company, had to make the payments on our ships.’

I have to take advantage of it.

‘My first…she was stillborn.  She suffocated inside and…I never got to name her.  Maybe if I’d visited a doctor more frequently… maybe if I hadn’t been so consumed with work.  I’ve thought for years about what I might have named her, about what she might have been like.  I could have given her dance lessons and flight lessons, could have put her through school.  She could have been so much more than I ever was.  I…I wanted so much for her, so much that she never got to see; that I never got to give.’

I keep telling my story, keep talking.  The silence on the other end is comforting.  I know that they’re listening, that they’re hurting, just like I am.

‘Danny, my partner.  He didn’t take it well.  Neither of us did, but it hit him worse, somehow.  But we kept going, kept growing.  We were partners.  We tried again.’

Memories crowd me, surround me, and I am blinded by them.  I’m moving my ship by rote now, flying as I talk, running through thoughtless actions I’ve run through a hundred times by now; a thousand.

‘My second was a boy.  France, I named him.  I’d always wanted to visit France.  The real one, on Earth.  I can still remember how he cried when he was born, and how the doctors of the Endeavour we’d stopped at let me hold him.  I held him in my arms just a few minutes, but I’ll never forget him.  He looked at me, I remember it.  They put him in my arms, and he stopped crying, and looked at me, and he was beautiful.  My baby boy.’

A tear drops.  I feel it roll down my cheek.  It’s been so long since I’ve thought of this.  So long that I’ve hidden the memories.  I can’t remember the last time I’ve spoken for this long.  The session is almost over, I know, but I can’t stop.  Not yet.

‘The doctors took him away, and that’s the last I saw of him.  My poor France.’ I cough, choking on my tears.  This part is hard.  ‘Danny took him.  The doctors wouldn’t stop him, he was the father.  They went out the airlock.  Without a suit.  I still don’t know why…I still don’t know why he did that.  Why would Danny do that?’  I ask,

I breathe deeply.  It feels…I feel a release, a bit, getting this far in the story.  I’ll need to do it again.  I still need to get further.  Maybe next time.

But for now, for now the session is over.

‘I want to thank you for listening this far,’ I say, genuinely.  ‘I normally don’t…I normally can’t get this far.  But you’ve been good, you’ve listened.’

I unmute the comms, and noise rushes in, more quickly than I’d expected.

I cut the man off.

‘Danny was not my husband.’  I yell, angry.  They couldn’t know.  I didn’t get far enough in the story.  I’m angry again, and I immerse myself back in my therapy with vigour, talking over the screams from the other ship.

‘My life has changed.  So.  Many.  Times.’ I say, gritting my teeth, emphasizing each word by tearing another panel off the Constellation in front of me.

‘So many times, so many things have happened, and you don’t know.  You can’t know!’ The claw rips in and out, tearing the ship to pieces.  I was methodical before, recycling as I went, feeding the scraps into the hold of my Reclaimer.  Now, though, now I’m angry.

‘I try to talk to you, and all you can do is scream about your ships, your lives, your families.  You you you.  This is about me!’

The constellation before me has been torn apart, two dozen pieces of ship mingling with a half-dozen floating crew, clawing for air as they suffocate.

My breathing slows as I watch their vital signs blink out on my monitors, as I watch them die, just as France did.  Another therapy session over.  Another unsuccessful session.

I got so close this time, so close to finishing my story, I think as I start processing the scraps of the Constellation floating nearby.

The Constellation…it came close.  But it wasn’t big enough, it didn’t give me enough time.  I’ll have to go bigger, next time.

The new armour I fitted to the ship will help, but…I’ll need to choose a target.  A Carrack?  An Orion?

Ships dance through my head, planning my next therapy session as I sort through the debris field, leaving the corpses where they are.  Bodies take so long to clean out of the processing equipment.