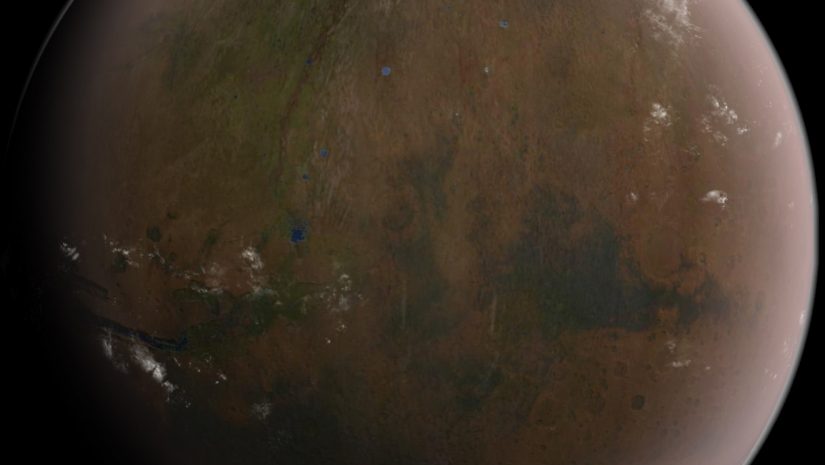 It's a beautiful day on Mars, what ever could go wrong?

Trevor Adams woke early on the morning of September 13th, 2125, his alarm ringing loudly in his ears.  Well, I suppose singing would probably be a better description.  Birds.  No birds up here and Trevor loved birds.

After an exaggerated morning stretch, Trevor stumbled into the shower and then proceeded to wrap up his morning bathroom rituals.

Trevor whistled one of the bird songs from his alarm as he pulled on his overalls and spacesuit.  No helmet for the fifth straight day… company says they’re still mandatory but not a single worker is wearing it.  Why would you bother if you’re fine without it?

Atmospheric Engineer was his title.  He was proud of it.  Trevor worked tirelessly in school to prepare himself for a career in the burgeoning field of terraforming and here he was.

The Mars terraforming project was a great success.  Only 12 years after terraforming technology was first patented, Trevor and his team had already set up a stable breathable atmosphere on Mars.  The achievement was, if you would forgive a brief pun, out of this world.

Trevor’s task for this sol was to visit three atmospheric monitoring stations, to ensure the readings continued to be stable, and perform any necessary maintenance on the associated atmospheric processors.

Despite the fact that there were almost five thousand people on Mars, Trevor was working alone in an isolated area and had been for several weeks.

Munching absentmindedly on a nutrient bar, his breakfast, he strode out of the habitat unit and jumped on to his Marver (some smart ass had decided that Mars Rover = Marver.  I know…).  It was a short and uneventful trip up out of the crater and up onto the south ridge to visit ATMO-63, first workstation of the day.

Having finished his breakfast, Trevor took a long swig of water from his flask and strode inside the complex automated station.

It took hardly a glance at the display panels inside ATMO-63 for Trevor to understand that something was seriously wrong.

Trevor immediately began working the problem, thinking it was perhaps localized to ATMO-63.

Unfortunately, the huge success of the Mars Terraforming mission had led to significant lapses in the duties of the responsible scientists and engineers.  Last night had been a particularly big party at the main hab.  No one else had checked their stations yet on this sol.

The fact was that ATMO-63 was not an isolated case.  All of the atmospheric processors on Mars had been malfunctioning for hours.  In order for the system to establish a stable atmosphere, all of the processors had to work together.

Trevor worked to isolate the cause of the abnormal behaviour of the terraforming machine while also attempting to contact the main habitat.

Before he could get far in his work, Trevor noted something truly terrifying.  Instruments were reading a massive buildup of pure oxygen inside and around ATMO-63.  Trevor immediately turned and started to head for the exit from the station when he heard a deafening WHOOSH followed for just a fraction of a second by the most intense heat he had ever experienced.

And that was it.

The explosion at ATMO-63 was massive, visible all the way from the main habitat, and almost instantly every other atmospheric processor on the planet overloaded and exploded.  The interdependency that made the whole system work to build Mars’ atmosphere was what ultimately caused the deaths of all 4,876 souls on Mars that day.  Mars’ new atmosphere catastrophically collapsed.

Approximately 9 months later, during the investigation into the disaster, Trevor Adams’ body would be found in the Martian sand near the ruin of ATMO-63.

Hailey Jones, a dear friend of Trevor’s, would be among those to find his remains.  She personally dug a grave for her friend and marked it with a small plaque and a tiny audio device.  For many years on calm sols one could hear bird songs drifting over the crater from the south ridge.