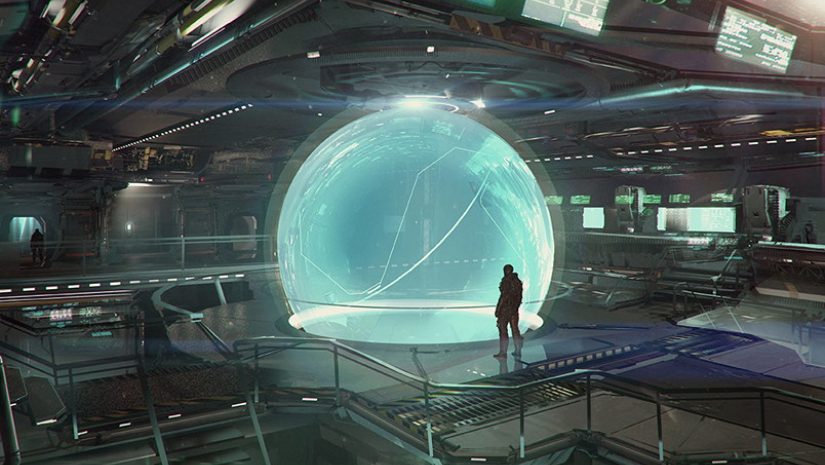 Shakedown Cruise Written Wednesday 1st of April 2015 at 09:00am by PropMaster

Editor’s Note: This tale is a stirring one, loaded to the gills with action, emotion, and grit. Read on for a slice of the capital-ship life as the UEEN Tiger Shark takes her shakedown swim! “Engineering!” “Generators...

Editor’s Note: This tale is a stirring one, loaded to the gills with action, emotion, and grit. Read on for a slice of the capital-ship life as the UEEN Tiger Shark takes her shakedown swim!

“We have clearance from Port Authority for a clear exit from dock!”

“All wings standing by for picket flights and emergency interceptions!”

“AOO is clear of hostiles! We have a clear course plotted to the edge of the system, and the remaining battle group elements are standing by at rendezvous point!”

“Docking clamps disengaged! We are free-floating and awaiting your order, sir!”

Admiral Sorensen allowed a small smile to cross his leathery face as he stood from his seat, leaning forward on the railing overlooking the holographic viewer of his ship. As each section leader checked in, readouts went from standby-yellow to ready-green in perfect time with the acknowledgements of each area. His sharp gaze drifted as the final call out was performed, looking around the sleekly designed bridge to the crew in the CIC. His crew, his people, stood at crisp attention, awaiting his word. A school of flounder swam idly near the ceiling, seemingly awaiting his order as well.

“Aye, sir!” First Captain Corvax replied, spinning smartly in his chair to face his console and brushing away an errant rainbow trout that bobbed in between him and the controls.

The holographic display expanded rapidly as the newly christened Shark-Class Supercarrier, the UEEN Tiger Shark, floated gracefully away from the dock that had been her womb for the past ten months. Her fins extended fully and her tail swung in graceful parabola as she was propelled forward by her bank of ten T-12-class engines. Around her, groups of Remora-Class Refueling Frigates broke away in clean schools, cutting through space in spiraling paths and returning to the Great Barrier station. A fugu fish chose that enchanting moment to become startled by the lights of the holographic display and puffed up. Admiral Sorensen gave the inflated fugu a gentle tap, sending it floating away towards the edges of the CIC. He cleared his throat, finding the sentiment of the moment catching in his craw, and spoke up over the quiet, controlled chatter of the bridge. “Engineering, how is the Tiger?”

“Slick as an eel and stronger than a beluga, sir. Her generators aren’t even pushing ten percent output at one-quarter thrust.”

“Helm, how’s she feel?” he asked, no small bit of envy sneaking into his voice. To command such a ship was one thing, but to fly it?

“Beautiful, sir. She’s faster than the simulations by a bit, too, but I’ve got her reigned in. Once we stop playing turtle, I’d love to get her up to speed and see what she can do,” First Captain Corvax replied, his professional demeanor nearly overwhelmed by the awe of the moment. Even the flounder seemed excited, schooling overhead in majestic and unfathomable patterns.

“Well, that’s the point of a shakedown cruise, isn’t it?” Sorensen replied, a gruff chuckle escaping his throat.

The rest of the crew in the CIC smiled, the Admiral’s good humor catching. A salmon nosed its way in between First Captain Corvax’s immaculately polished boots and laid a clutch of orange roe, which stuck wetly together and began to immediately float away. Corvax caught a few of the amber-like eggs in one hand and gently sent them towards a safer corner of the CIC. “The salmon are spawning, sir.”

The Tiger Shark swam through the sea of stars with a grace that belied her size and power, heading for the rendezvous point with the rest of her school of support fish.

Alarms sounded throughout the CIC as an unscheduled incoming jump was detected by the long-range scanners. Admiral Sorensen looked to the navigation officer, Lieutenant Ota. Ota’s face had gone pale as he leaned away from his sensors, and his hands shook as they flew across the surface of the console. “Admiral, incoming jump. Whatever it is, it’s massive.”

With a flash of multicolored light that filled the bridge, a massive fish appeared from the ether. Twin ram-claws clutched the dessicated remnants of a carrack, and eye-stalks swiveled to regard the large fish before it, black and soulless pupils discerning the potential source of nutrients.

Admiral Sorensen felt fear clench around his heart with jaws like a moray eel, and he sunk back into his chair, sending up a puff of salmon roe. “Poseidon, help us. It’s a Pisces Major.”

The bridge fell silent for a moment as horror dawned upon the crew, but Sorensen found his courage and stood once more. “I’ll be damned if I let a giant crab break up our shakedown cruise. Weapons!”

“Locked and loaded! Inputting firing solutions to the missile bays!”

Admiral Sorensen bared his teeth, a grim snarl crossing his face, and he swept his hand through his greying hair, dislodging a small minnow. “Break out the butter and get me my bib. Tiger Shark, prepare to engage on my mark!”