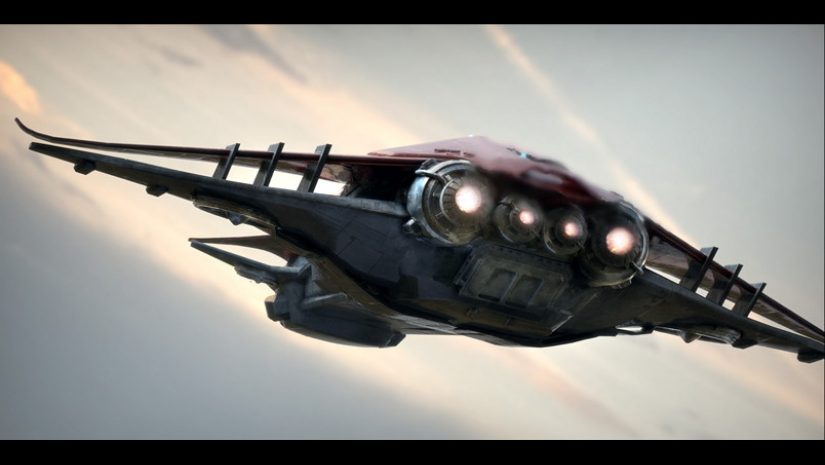 Hello Citizens. Welcome to Passengers II. If you missed it yesterday, check here for Part I.

We didn’t think it through terribly well. She should probably have been inside the cockpit. The broken arm is going to make it almost impossible for me to fly.

Our comms are quiet though. Neither of us have much to say. After what we just saw… what just happened; what’s still happening, what is there to say?

We float slowly away from the doomed Starliner. Depressurization as we forced open the cargo doors gave us enough of a boost to get away from the ship, and now we float, watching, as the arm of the Reclaimer rips in and out of the Starliner, watching as chunks of the Genesis the size of our Merlin float away and into space.

The Merlin… all systems on the small ship are silent.

We’re surrounded by it.

We watch the Reclaimer as it slowly dismantles the ship, and I’m glad we’re far enough away that I can’t make out individual bodies floating in space anymore, just the occasional glint of the Reclaimer’s massive spotlights off a passing piece of debris.

And then it turns, slowly, moving like the lumbering beast it’s supposed to be, not the relentless killer I now know it is. It turns away from the Genesis, engages its Q-drive, and is gone, streaks of light twinkling and gone in a flash.

Atna and I are left in the silence, nothing around us but two coffins; one, the giant form of the Starliner, the other, our virtually useless Merlin. Without a parent ship, we’re as good as dead. And the only other ship in nearby space is…

‘Atna,’ I say, looking towards her through the cockpit glass, ‘I’m going to move us… move us to the Genesis…’ Finding words is a struggle. I have to stay awake long enough to get us there, at least.

Putting me in the ship was a really dumb idea.

Even the movement of crossing my right arm over my body, reaching the throttle and inching it up, it moves my left arm, and the waves of pain come crashing down. I wince, grit my teeth, close my eyes, anything I can try to do to stop the stabbing.

Throttle up. Not fast. We’ve got time. Not much time, but…

Silence again. Nothing but the hum of the engine. We’re doing maybe 10 m/s, barely moving, barely taxing the Merlin at all, but…

We didn’t drift far from the Genesis, but at this speed, we’re still minutes out.

I tap the throttle, doing my best to line us up. If I get it right, I might be able to crash us in through the same cargo bay we got out from…

‘I love you,’ Atna says, her voice soft coming through my speakers. I look up at her, and she’s there, stuck to the outside of the ship, staring at me, and smiling.

For a split second, I panic. Images of a thousand movies where a lover says one final ‘I love you’ before sacrificing themselves fill my head, images of Atna detaching and floating away through space, never to be seen again, at least by me.

And then I smile. Sometimes, ‘I love you’ is just that.

Atna’s voice wakes me, and I grunt in pain as I move my arms by instinct.

I blink, shake my head, grit my teeth, and look around. We’re still on track, almost at the open cargo bay. A few light touches at the stick, and I power down the throttle. Momentum will take us the rest of the way.

Atna knows what’s coming as well as I do. Detaching herself from the Merlin, she uses her thrusters to carry towards the cargo bay. The Merlin’s going to crash; I’m not in a position to guide her down gently. With any luck though, the impact won’t be too…

The nose of the Merlin hits the far end of the cargo bay, the impact pushing me forward in the cockpit. I’d braced my arm, but still, the pain is…

Lets just say it hurts. I only have so many different words to express pain with, and right now my vocabulary is limited almost entirely to cursing.

The tip of the Merlin, sword like as it is, has passed through the flimsy retaining wall between the cargo hold and the rest of the Genesis, arresting the Merlin’s movement.

I pop the canopy on the Merlin, crawling my way out of the cockpit and into the 0g environment of the Genesis. The Reclaimer must have knocked out the gravity generator, or the power. If it’s just the gravity that’s gone, we’ve got a chance. If the power’s gone…

I steady myself, small suit thrusters keeping me level, and wait for Atna. She floats in slowly, the level I environment suit she’s wearing; we’re wearing, they cling, don’t leave much to the imagination, and I think again, how lucky I am to have her.

‘I love you too, Atna,’ I say as she floats in, steadies herself beside me.

‘I know,’ she says, putting a hand against my visor, as if she were caressing my face.

I wish she was.

It’s the closest we’ll get till we can find a way out of this mess.

Can’t think of that.

‘What’s the plan?’ she asks, and I breathe deep.

‘We need to get a signal out. I’ll go for the power, see if we’ll be able to get it running again. Can you get to the cockpit? See what’s intact?

‘Atna nods, puts her head to mine, and then floats away. She’s got further to go, but with two arms, she’ll be a lot faster.

We keep in contact as we move, but keep the chatter minimal. In the underbelly of the ship, I don’t see much damage, no bodies.

Atna finds three that weren’t sucked out when the cabin vented into space.

‘Sheane,’ Atna’s voice comes through the speakers in my headset as the small flashlights on the helmet’s top shine my way down a corridor, now strewn with baggage that came loose in the attack.

‘The door to the cockpit’s sealed shut. Even with power, I don’t think it’d move. Looks like the wall beside it is bent, the door mechanism’s jammed.’

‘Any ideas?’ I reply, using my good arm to push luggage slowly out of the way, keeping my left arm cradled as close to my body as I can.

I stop for a second as Atna continues, grabbing a nearby suitcase, struggling to open it in 0g.

‘I’m going to go outside the ship, see if I can make my way around to the cockpit from the front, see what happened.’

‘Keep in touch’ I say. I want to tell her to be careful, tell her I love her, tell her I just want to hold her, now and always.

She knows. I don’t have to say it.

I pull a pink blouse from the luggage I’ve ransacked, awkwardly tying it, and my left arm, tight around my waist as some woman’s clothing starts floating slowly through the cargo hold.

I continue threading my way through luggage as Atna talks. Down to the side of the ship, out one of the massive holes torn in the hull by the Reclaimer, she threads her way into open space, using the thrusters to guide her way along the ship, heading towards its head.

Neither of us talk about our air reserves; neither of us mention the number in the top left of our HUDs slowly ticking down.

Five hours of air left ticks by slowly. It may sound like a lot, but in the depths of space, with no way to get more oxygen, and no rescue coming… with no way out.

We don’t talk about it.

Atna makes it to the cockpit before I get to the power generators.

‘It’s… I think the Reclaimer punched right through the cockpit. Blood on the back wall. The claw must have…

The audio feed crackles slightly; the large metal bulk of the ship interfering in the comms.

‘Atna… are any of the stations intact? Can we send out a message?’

‘One… I’ve got a station back here, looks intact. If we can get power…’

I’ve reached the door to the engine room, and I brace myself against the opposite wall to get a grip on the door. Opening it with one arm in 0g is not easy, but eventually…

‘Atna, I’m in.’ I say as the door slides open enough for me to squeeze in.

I stop as the beams from my headlights dart across the room.

I look out at what should have been the engine room, and it’s just… gone. The Reclaimer pilot must have taken it out.

I float out into space, looking out into the black. It’s… we’re…

Atna and I meet up at the cargo hold again, float slowly into each others arms. The Merlin has no long-range radio, the Genesis is completely powerless…

We hold each other as four hours of oxygen left ticks by.

At three hours left, we start talking. Just… talking. I talk about mom, how she would have loved to have met Atna.

Atna wishes we’d have had a kid. I do too, now.

I wish it weren’t too late.

Two hours of oxygen left ticks by. We’ve been silent a while now, just holding each other, wishing the suits weren’t separating us.

I break the silence, and she looks up as we rotate slowly.

I don’t have to finish the sentence, and she nods. The light at the top of my HUD turns red as I slow the oxygen I’m getting. Immediately it becomes hard to breathe. Not impossible, just… difficult.

We’ll pass out slowly. It’s a better alternative than…

‘I love you,’ I say, looking up at her, wishing I could hold her, could feel her, could kiss her lips just one more time before…

‘I love you too’ she says. I see tears in her eyes.

I know they’re in mine too. One final ‘I love you’ between lovers. Poetic? Cliché? I don’t know. Don’t care.

All we’ve done… all we wanted to do, and this is how we go out.

We’ll be forgotten, remembered by no-one.

Will they name us? Will they tell stories of us?

I don’t know. But as I close my eyes, as my breathing starts to slow, I turn up the volume.

I hear her, I listen to her breathing. In and out, in and out, slow, steady.

At least I won’t die in silence.

Tune in to Endeavour this Sunday for the finale of the Passengers series.