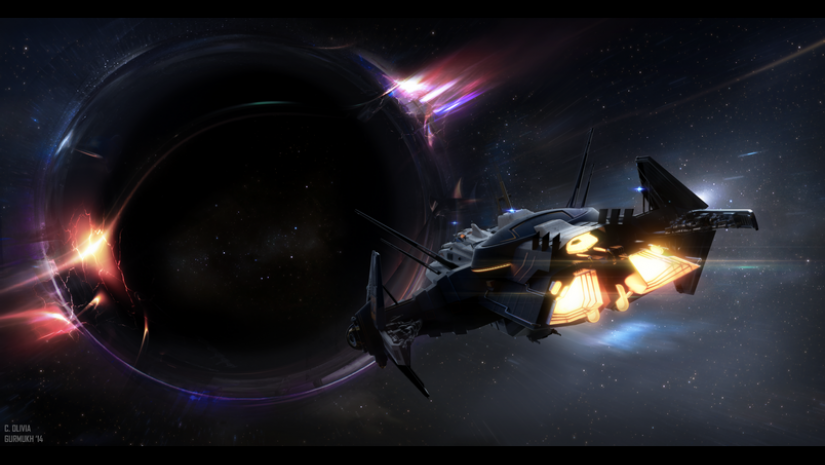 A Carrack hits an anomaly in well-explored space.  Will the crew of the Sedna survive?

“What the fuck was that?!” Captain Derek Kilgore braces himself against the arms of his seat as the Sedna harshly rocks in space.

“I’m not sure Captain, seems like some sort of gravitational anomaly.” Polly, Science Officer, replies in a worried tone.

“Possibly. Bringing jump scanners online. However, this is the Stanton system… it has been pretty well explored.”

Another vicious wave throws the Carrack wildly about in seemingly empty space. “Faster would be better Polly. Jacob! Get this ship steadied.”

Polly gasps and shouts, “Captain! We are falling into a jump point! We must get the ship-”

Panels and pipes all around the bridge explode as the Sedna is buffeted by a massive shockwave. Polly lies unconscious against a bulkhead.

Alarms sound around the entire vessel as a dizzying sea of light and colour engulfs the ship.

“JACOB! Get us stabilized and pointed downstream. Jacob?” Captain Kilgore glances at his pilot, realizing that he is dead… a length of pipe impaling him through his pilot’s seat.

Rapidly, Derek transfers navigational control to his station and begins working feverishly to get his ship out of danger.

The jump tunnel split in two. The Carrack, still being pulled sideways through the passage, slams into the split and is viciously thrown clear out of the jump and into normal space.

The shearing forces of tearing through the wall of the jump passage wreak havoc on the Sedna. As she finally settles, her wings and wing turrets float nearby… ripped clean off, along with a myriad of other bits and pieces of the ship.

Last week he had landed his heavily modified Crucible on Microtech and retired to a dark corner of a quiet bar.

Later that evening a nondescript businessman walked by his table and surreptitiously dropped him a note.

The note read, “Check your mobiGlas for a very limited time offer.”

Curiosity immediately clawed at Liko’s mind and he flipped open his holographic device.

The businessman had offered him the coordinates for a nondescript salvage operation for 20k UEC. It was a lot to pay for coordinates but he felt flush and ready for a new job so he quickly accepted and exited the bar.

Now, he stands on the bridge of his Crucible, the Tulip, glaring at his long range scanners. A Carrack. She’s right out on the farthest reaches of the Stanton system, further out than anything he could remember.

Liko worked alone. He had jury rigged up a ton of automation which allowed him to operate his Crucible with a crew of 1… himself.

As the Tulip approaches the wreck, he jumps back in the pilot seat and guides his ship out of quantum. Immediately he knows there is something not right about the situation. His suspicions are immediately confirmed as he spots a figure in an EVA suit, attempting to do patch repairs on the outer hull of the Carrack.

Liko is torn… he wants the Carrack but he had decided long ago that wasn’t a murderer and it was highly unlikely that figure out there would give up the ship.

After a long period wrestling with himself, Liko queues up the comms: “Captain Liko of the Tulip repair and salvage vessel to any crew of the adrift Carrack.”

“Please repeat. Transmission did not come through.”

“Captain, I will close on your position so our communications are clearer.”

“Captain Kilgore, this is Captain Liko of the Tulip. Could you please repeat your request?”

“Hello Captain Liko. We discovered an uncharted jump point in Stanton… but not with our long range sensors… we hit it and entered it sideways. Pilot was killed before entry. We burst through the wall of the jump passage and it tore the ship up pretty bad. Engines at 10%, main power offline, main turrets sheared off. I need medical assistance for my crew and significant help in repairing the Sedna.”

“Did you say you found an undiscovered Stanton jump point?”

Liko considered the information carefully and was glad he hadn’t opted to come in firing.

“I was actually given this location as a salvage opportunity. However, seeing as you are still in possession of your ship that seems to be off the table. I have a proposal… I will lend you a pair of advanced biobeds to help heal your crew, I will get the Sedna back to best condition I can with my Crucible. In return, I would like us to return to the coordinates of this jump point, properly map it, and split the profits garnered from selling it to the UEE.” Liko was well aware that the profit from the jump information would far, far outweigh his costs.

“Captain Liko, that is a reasonable offer. You could have asked for much more given our situation. Consider it a deal.”