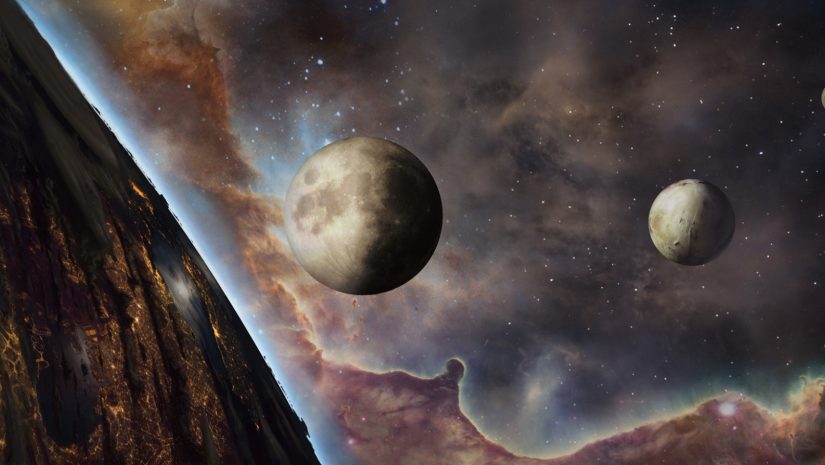 Mining on Leir can be exciting when you're not alone, tune in and read today's fiction offering by Nehkara.

‘I’m not sure how he managed to do it.  How did he convince me?  Brian can be such a pain.  Now I’m down here getting shot at over some stupid crystals.’

Just a sample of the thoughts running around inside Dan Locke’s mind as his MISC Prospector “Erebus” worked away on collecting shards from the glacier blue crystal formations.

An audible warning accompanied by a pale flashing yellow light on the control panel indicates that one of mining storage pods has been filled.  Leaving the Erebus in automatic mode, Dan climbs out of his seat and dons his old beaten up armour.  He pats his ever-present Arclight pistol on his hip and climbs out of the ship.

Dan digs out an un-expanded empty storage pod, and then proceeds to detach and secure the full pod.  A small crane helps him lower the heavy storage container down to the ground.  During this entire exercise, Dan continually checks over his shoulder for any… visitors.

Finally, after securing the empty mining pod to the Erebus, Dan begins climbing back into his ship when a flurry of laser bolts slam into the rocks, shrubs, and ground around him.

Looking up, Dan gazes upon a trio of Dragonflies flown by… those who would rather he was not on Leir III.  The Outsiders, Sand Nomads, Sand People - call them what you will.

Returning fire, the Prospector pilot takes cover in the entrance to his ship.  Crouching there in the doorway, Dan had just enough time to mutter, “Brian… you ass.  This is your fault.”

Dan closely watches the three Dragonflies, keeping track of their movements despite the incoming fire.  It’s obvious they are surrounding him.

Thankfully one of the nomads comes a little too close and a flurry of shots from Dan’s Arclight tear through him to even the odds slightly.

Less thankfully... one of the remaining Dragonflies has positioned itself perfectly and opens up a torrent of fire on the Prospector entry.  Dan tucks himself tightly inside the door and ponders his predicament.

Surely the other Dragonfly pilot would be attempting to steal the resources he worked so hard to extract.

Mid way through Dan formulating a plan of action, a faint rumbling can be heard… growing louder.  Dan’s face sprouts a satisfied smile.

Suddenly the stream of weapons fire engulfing the Erebus doorway ceases and the sounds of the Dragonfly in question turning to flee can be clearly picked out.

Suddenly, the distinct sound of a larger ship’s laser cannon rings out.  Peering out the door, Dan watches as Brian’s trusty Hull B - the “Knarr” - mows down the fleeing Dragonfly with its twin laser cannons.

The Knarr now spins with surprising agility and lights up the other Dragonfly which had just begun its attempt at strategic retreat.

Moments later, the Knarr sets down nearby the Erebus.

Dan, huge smile on his face, strides towards the newly arrived cargo ship.  Brian meets him at the bottom of the ramp and wraps his best friend up in a brief but genuine hug.

“Dan! How are you making out?”

Dan continues to wear his grin as he punches Brian solidly in the shoulder, “I’m alright.  Thanks to you.  Though… I was in this mess because of you.  So thanks for at least holding up your end.”

Brian’s smile matches his friend’s, “Yeah I know this place can be a bit of a hot zone but those crystals will bring in some good credits!  Should be great for jewelry or holograms.”

“Always about the credits eh?  No matter the risks.”

“Well, sometimes you have to take the risk.”

“Fair enough.  Now… enough of this rambling.  Let’s load up the Knarr and get both of us out of here before their friends come looking for them!”

The pair work diligently to load the full Prospector mining pods from Erebus onto the Hull B framework, breaking briefly a couple times to tell jokes and pass along news.

Now ready to depart their separate ways for the moment, the two friends embrace once more. “Dan, don’t be a stranger.  I’ll front you 20,000 credits now and I’ll send you the rest of your cut once I have it all sold.  Thanks for joining me in this.”

“Don’t mention it Brian… things got a little hairier than I would have liked, but you came through in the end in that department.  Let me know how the sales go and have a safe trip!”

“Will do!  Let me know the next time you need an assist from ol’ Knarr here.”

Several minutes later the pair of MISC ships ease off the ground and slowly head away from Leir III and on to new destinations with new opportunities.