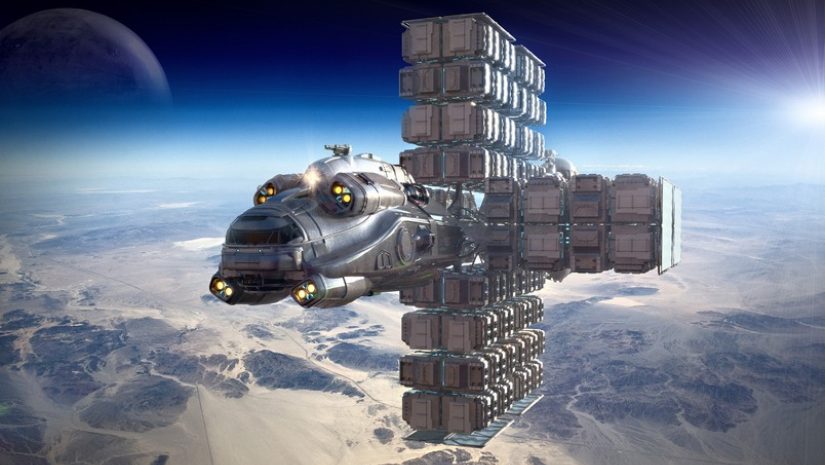 Hunted and Hunter, Part I Written Thursday 20th of August 2015 at 07:00am by StormyWinters

Hey The Relayers, we are featuring another submission today. This one written by Dragonfiremalus. Enjoy.

I dreamed, as I often did, about flying. About the first time I ever piloted a ship by myself. I didn’t care that it was an old P-32 Swordfish that couldn’t even break atmo by itself, or that the top speed was embarrassing compared to most. I only cared that I was flying. I soared over the hills and forests below, shot over the silver treetops, and skimmed the lakes so close above the surface a plume of water shot out in my wake. Black and gold plumed night birds soared next to me as I watched the sun disappear behind the mountains. I slowly rolled over and looked down at the landscape below awash in the light of the two moons. I was free.

Eventually I had to come down. I had to wake up.

It was dark. It should have been morning, I felt like I had slept for days. Something was wrong. For a moment I passed it off as the common disorientation on waking from a vivid dream. But the last I could remember was going to sleep in my own bed, in my own room. I definitely wasn’t in my bed. I was lying on a cold, metal floor. And there were noises…. voices, and the dull roar of engines. With a sudden panic I bolted upright and gasped, almost throwing up when I took in the stench. The stench that only a crowd of unwashed people huddled together for too long could produce. I started coughing, a bit of bile coming out, dropping through the metal grated floor.

“Take it easy,” a voice said, a hand coming to rest on my shoulder. “Just breathe.”

I looked up. Through the darkness I could just make out the features of the person who had spoken. He looked to be a bit older than myself, probably in his early twenties, with mid length hair and the scruff of a beard.

“Where am I?” I asked looking around. I could see that I was in a dimly lit space with metal walls, about a dozen meters by half that, and it was full people. Several dozen shapes, sitting, lying down, packed together without room to spare.

“Hold of a ship,” he answered. “My guess, custom storage unit of a Hull C. At least, engines sound like it.”

“How the hell did I get here?”

“They dropped you in here with a dozen others yesterday, all drugged up. You don’t remember anything?” I shook my head. “Yea, the chems they use can mess with your head. It’ll prob’ly come back. Might not, though. Really doesn’t change your situation much.”

I could feel myself start to panic, but I tried my best to keep calm, taking slow, deep breaths despite the smell. Sure, our small town was on an outer planet at the edges of the Empire, but still people didn’t just get grabbed from their beds. That was something for vid shows, an idea the core planets has of the lawless frontier.“So, I’m… I’ve been kidnapped?”

“That’s the short of it,” he answered, “On our way to the Nul slave markets, unless I miss my guess. We should be arriving soon.”

The tides of panic crashing down on me threatened to drown me. ‘It’s not a dream’, a voice said inside me, pushing against the overwhelming denial. I shut my eyes, tried to shut everything out. Breathe in. Breathe out. Breathe in, ignore the stench. Breathe out. “You seem…  you seem awfully calm about the whole thing,” I said as I regained some of my composure.

“I’m a veteran,” he said casually.

“Yea. They call me Barker. I’ve been through Nul half a dozen times,” he explained. “Been bashin’ rocks on one rim world or another since I was ten. Every few years, I get sent back through and picked up by someone new. After a while it becomes routine. It’s not as bad as you’d think. Just keep your head down and don’t draw attention to yourself, you’ll be fine.”

I sat back against the wall and took one more deep breath, then looked around again at the room. Either the light was getting better or my eyes were shaking off some aftereffect of the chems, because I could make out more detail. My eyes came to rest on the kid huddled in the corner, knees tucked up beneath his chin and arms wrapped around his legs. He was shabbily dressed, and dirty. His hair was a reddish brown, tangled and scraggly, his wiry frame suggested he had never been well nourished. A purplish bruise covered his left cheekbone. He seemed very young, I guessed about eight years old.

The early panic was gone, quickly being replaced with a cold rage. This wasn’t right for anyone to go through, much less a young kid. The anger felt so useless, there was nothing I could do, no one responsible I could hurt. So I did the only thing I could.

“He woke up a few hours before you did,” the veteran informed me. “Hasn’t said a word.”

A new noise, a louder roar accompanied by vibrations through the walls, sounded, I could feel the deceleration.

The roar grew louder, the ship shifted back and forth for a while before finally jolting still. A few metallic clanks sounded, and the roaring drifted away. Light streamed into the compartment as double doors opened in the far wall.

“Damn,” a gruff voice said from outside. “I keep tellin’ Bart he needs to install a bathroom. Cleanin’ up all the shit is not worth the savings. Can you believe that stench?”

A figure appeared at the door, a large silhouette in combat armor carrying a rifle. “Everybody out!” it cried. The inhabitants of the crate began struggling to their feet and moving towards the door. “Move!!”

“Come on,” Barker said. “You don’t want to be last off.” I got up and joined him and the press of bodies moving towards the door. When I looked back, the kid was still huddled in the corner, not moving. I didn’t know what the slavers would do if they looked in and saw him still sitting in the otherwise empty container, but I could bet it wasn’t anything good.

The storage unit was emptying fast. With a silent swear I hurried back over next to the kid. “Come on,” I prodded him with my foot. “Get up!” There was nothing else to do but reach down and grab the kid’s small arm and pull him to his feet. He gave a small cry, but barely resisted as I shoved him towards the door.

I emerged behind the kid into a large hangar. Whatever ship had brought us was gone, leaving the shipping unit alone on the hangar floor. Every wall of the large hangar was bare metal, utility piping crisscrossing its surface. The large doors were open, nothing but a shimmering air shield separating us from the black void. We were on a space station.

“Last one out, huh?” the armed man said as I passed by. Without warning his fist shot out and slammed into the side of my head, knocking me to the ground. “Get a move on!” he shouted.

I struggled back to my feet, head ringing, rage building. Every part of me screamed to hit back, to attack him, to hurt him. Almost every part. There was a little nagging voice insisting it would be suicide.

I turned and hurried across the hangar after the others, glancing back only briefly to imagine what kind of demon must lurk under that man’s helmet. “I told you, you didn’t want to be last,” the veteran hissed as I came up beside him. The kid looked up at me, and I tried to smile. But mostly I was wondering what was wrong with him, and what was wrong with me.

We were herded through a corridor to a wide room with drains in the floor, where we were forced to strip while they hosed us down. We put on yellow jumpsuits and were marched down another corridor, into a massive chamber filled with people. The walls of the room were lined with large, fenced enclosures, each one holding a group of people in a different colored jumpsuit. The layout reminded me of the livestock auctions I had seen at fairs back home. With a sickening feeling I knew to the buyers here it was pretty much the same thing.

Men in suits sauntered about the room, examining the wares, each followed by a cluster of armed bodyguards. In the very center of it all stood a stage where a fat, bald man was showing off a line of people chained together. Next to him stood a trio of armed men in black and green combat armor, watching the slaves and the crowd. Vidscreens above him displayed current bids and pricing details for the collection of ‘wares’.

I had no clue how I had gotten here, no memory of anything other than a peaceful, and somewhat boring, life in a small town on the outskirts of the Empire. But now I was here, where human life was traded as easy as foodstuffs, and I was another bit of property to be sold. We had arrived at the Nul slave markets.