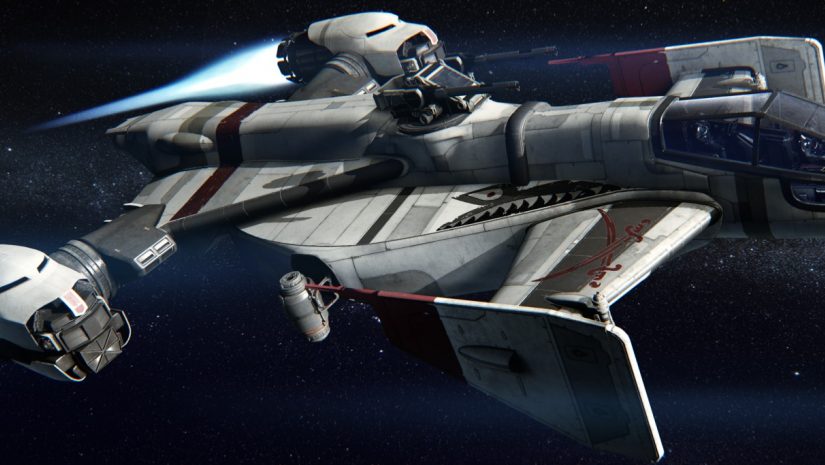 Hunted and Hunter, Part IX Written Wednesday 31st of May 2017 at 12:00pm by StormyWinters

“We’ve been spotted!” Brannigan’s voice said over the comms. The Cutlass turned hard, pressing me against the restraints of my seat.

“Call’s gone out, two hours ‘til full militia arrives.” I reached over and started the two hour timer on my mobiGlas. That was our window for getting in and out.

“Looks like the decoys did their job, the pilot said. "Only two Gladii and a Cutlass in our way. Light defense, but we’re still in for a ride." One of the mercs pulled himself into the turret chair, hitting the button that raised it up to the controls.

“Here we go!” shouted the merc sitting next to me as the ship banked again. Everyone wore almost identical airtight combat suits, but the personalized markings on the side of his helmet told me it was Vin, one of the younger mercs. The turret opened fire above, and staccato reverberations echoed through the hull as the twin guns belched fire. I caught a glimpse out the small porthole of the Banu vessel, trailing behind out of harm's way but still close enough to fire off its large guns. The Cutlass’ shields shimmered as a few rounds impacted, but nothing got through.

The turret swiveled around to track one of the passing ships. “Scrapped one Gladius,” the merc manning it shouted with a whoop.

“Missiles!” shouted the pilot. “Hold on!”

A few dull thuds sounded as flares launched, then the ship spun around with a wrenching twist. I was sure we were about to get torn to pieces by a swarm of hunting missiles any second, and suddenly felt like the ship was a metal coffin. But the seconds passed, the ship completed its maneuver, and no missiles hit.

“Evaded,” the pilot said, then accelerated the ship back around into the action. “Enemy Cutlass down.”

“Yehaaa!” shouted Vin. Another barrage of bullets slammed the shields, then the shield died, and a trio of small holes suddenly appeared in the hull as rounds punched through the armor. There was a rushing of air that dropped to silence except for the reverberations through the hull.

“We’ve been hit,” the pilot said over the comms. A weight slumped against my shoulder, I turned and saw Vin, still strapped into his seat, but with a large hole torn through his combat armor. Blood poured out like a fountain, spreading over the suit and chair and deck. Across from us Ajax pulled himself out of his restraints, despite the silent protests of those around him. He crossed over and knelt beside Vin, pulling bandages from his pack as he did so. But he didn’t apply them, it was already too late.

After a silent fury, he clicked his comm on. “Man down.”

A moment later the Cutlass banked again, sending Ajax sprawling across the floor. The other mercs grabbed him and kept him from tumbling more. A few seconds later the report came across that the final enemy had been destroyed. But it was a sullen celebration as the ships turned and headed for the planet, the limp body of Vin still slumped in the chair. I glanced at my mobiGlas. 1:57 left. The whole battle had lasted less than three minutes.

The air streamed back into the cabin as the Cutlass descended into the planet's atmosphere. After a few minutes the ship leveled off, wind whipping past the hull breaches. The ship settled down, hovering a short ways above the ground as the rear door lowered.

"Everyone, go!" came the command. I unstrapped myself from the chair and hoisted my rifle, then followed the other mercs out of the ship.

"We'll get her patched up and ready for pickup," the pilot said as the ramp closed up and the ship rose away. "Good hunting."

We were standing in a clearing amongst a sparse, wooded area on a slight rise. Several hundred meters down the slope, partially obscured by the thin trees, sat a small mining town. Dawn was still an hour or so away, and two small moons glistened in the sky. It would have seemed peaceful, but for the gunfire that broke out almost as soon as we started down the slope.

Energy bolts zipped through the trees, snapping branches and kicking up dirt. We quickly ducked behind the cover of trees, but the shots were so wild it almost wasn't necessary.

"Charlie team on the ground," Ajax said over the comms. "On the ground and under fire. Looks like they've decided to put up a fight."

"Understood," Brannigan's voice responded. "Alpha team touching down now, half a click north of the target. Pup, see what you can do about softening them up for us."

I peered around the tree trunk at the town through the scope on my Behring CSS, a much lighter gun than the LR-620 and better for mobility. The village looked like a formula built frontier mining town. Squat, rugged buildings not so much built as placed, standard constructions produced in bulk and shipped out from factory worlds to be assembled where needed. The population couldn't have been more than a few hundred. The only unique building was the loading complex on the near side of town, a small pad and storage building topped with an AA turret.

Several dozen of the inhabitants were rushing through the streets, armed with shotguns and a few rifles. One of the defenders stood in the shadow of a building, firing a MaxOx at the treeline. At this distance he'd have to get very lucky to hit anything with that. My bullet hit him in the thigh, and he fell. He'd survive, but was out of the fight.

"Charlie team, move forward. Pup, stay here and keep us covered." The five mercenaries moved down the slope, keeping in the cover of the trees. I swept over the town with my scope. At first glance each building was the same as the next, but as I searched the outlines for armed defenders I noticed the small decorations and unique bits that made them homes. Their homes. And they were fighting to defend them.

Even the coldness of the chems running through me couldn't bring me to shoot them, but I could still keep them from shooting back. Another man appeared around a building and raised a rifle. I shot the dirt in front of him, and he jumped back. A head appeared over another building, but it disappeared again as soon as my shot pinged off the roof beside him.

Ajax and his five mercenaries safely reached the edge of the trees. "Charlie in place."

"Beta in place," another merc chimed in.

"Remember," Brannigan said, "keep casualties to a minimum. Take them alive. Now take down that gun."

An Ursa rover broke over the ridge to the north of town, turret firing at the buildings. The defenders ran, retreating back towards the center of town. Charlie team moved out of the treeline under cover of the barrage and quickly set up an ARM missile launcher.

"Ready to fire," Ajax said a moment later. "Light up the target."

I flipped on a laser on the side of my rifle and pointed it at the AA turret. "Target lit."

A plume of smoke shot up from the ARM, a missile rising into the air and arcing down to the turret. A shield around the turret flared and died as the missile hit, then the turret itself erupted in flame as a second missile struck.

A figure appeared around the side of a building, a rifle pointed at the launcher. He was young, a teenage kid firing wildly. I buried a bullet into the ground at his feet, kicking up dirt around him, but he kept firing. Another shot whizzed by his head, but he didn't care. The other mercs were firing back, he was going to get himself killed. There was nothing else to do. My third bullet ripped through his knee. He fell back and out of sight.

"Porter's hit," Ajax said. "It's bad. Moving back to the trees to stabilize him."

"Draconis, rain fire on them." Brannigan's voice was cold, anger seething just beneath the surface. The Redeemer rose over the hill, turret lighting up first one house, then the next on the edge of town. It hovered over the town, the small arms fire doing nothing to its shields, firing back with devastating results at any that tried.

It was over quickly. Under such a barrage the defenders had no choice but surrender. Smoke rose from the ruined shells of buildings as the townsfolk put down their guns and the mercenaries moved in. 1:26.