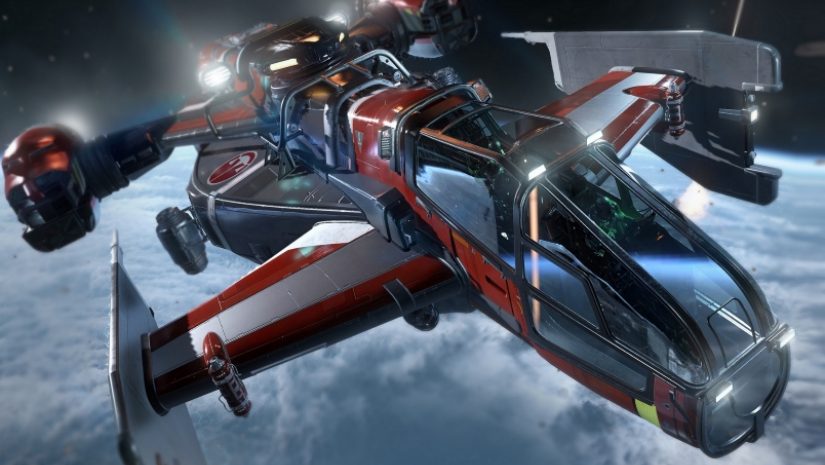 The Highest Bidder Written Wednesday 11th of November 2015 at 01:52pm by CanadianSyrup

Hello Citizens! Today we have an exciting piece from Prop Master! Check it out.

Moira’s Folly III, a Cutlass Red rapid-response drop ship, hung in the smoggy atmosphere above Ferron III, known as Asura. Aboard the ship, the four crew members sat in relative silence. The pilot had leaned back her seat slightly and was monitoring communication frequencies, switching from signal to signal every minute, one finger tangled in her long blonde hair. The co-pilot was leaned over his station, snoring lightly. In the rear of the ship, the two technicians played a complex card game, but the competition had worn stale. The pilot sighed, rubbing at her eyes as she shifted to a new communication signal, and then stopped as she picked up fierce chatter from the surface.

“They’re coming around from the backside!”

“Flank them through the side entrance!”

Staccato bursts of gunfire echoed mutely through the communications, as the pilot attempted to zero in on the signal’s source. “We’ve got potential customers.”

The co-pilot wiped a bit of drool off his station and took the ship out of a hover, slipping through the smog towards the outskirts of Tram, the primary city. The pilot listened intently for a few more moments, then grinned as the computer zeroed in on the signal’s source. “Got it. Taking control, you get ready to broadcast.”

The door at the back of the cockpit slid open, and one of the technicians stuck his head through. “Do we have customers?”

“Maybe. Moira thinks so. Get prepped, it sounds hot,” replied the co-pilot.

The technician grinned and disappeared back into the rear hold, leaving the two in the cockpit to their work. The Cutlass Red sped through the city, zipping between abandoned skyscrapers and towers, heading for the action in the streets below. Moira brought the cutlass down lower, breaking through the densest of the grey haze to get a better view of the streets below. The smog never truly lifted on Tram, only thinned, and through the industrial miasma Moira could see yellow and blue flashes of weapons discharge. “There we are,” Moira said with a smirk, cutting back the engines and returning to a hover, “Broadcast away.”

The co-pilot opened the comms, splicing his signal onto the combatants own communications on the surface. “Attention, citizens. We are picking up combat from your area. Do you have wounded?”

There was some confusion and hesitation on the other end, before somebody spoke up. “Who is this? This is a closed comm signal.”

“This is the ambulance shuttle Moira’s Folly, looking to render assistance to whomever we are speaking with. Do you have wounded or need evacuation? We can provide close fire support if you need aid reaching our shuttle.”

The comm signal was broken up briefly with shouting and gunfire, which lasted for a long minute, before a different voice responded. “We have wounded, and need evac. I’ll send you our location.”

“Well, hold on a moment,” the co-pilot said calmly, glancing to Moira. Moira was scanning communication signals in the nearby area. “We’re sorting a few things out on our end. Hold tight.”

Moira cut into a separate communication signal, grinning as she caught gunfire and confused commands.

“They flanked us out from the side! Pull it back. Regi, push in from the front, get this heat off us!”

“Moving in on those bastards!”

Moira spliced into this new signal and spoke clearly. “Attention, citizens. We are picking up combat from your area. Do you have wounded?”

There was a bevy of confused mutterings and curses. “Who is this? We’re on a closed signal!”

“This is the ambulance shuttle Moira’s Folly, looking to render assistance to whomever we are speaking with. Do you have wounded or need evacuation? We can provide close fire support if you need aid reaching our shuttle,” Moira said, winking at her co-pilot, who flashed a thumbs-up.

“We’ve got wounded, but nothing we can’t handle.”

Moira’s face broke out into a sneer. “Really? Well, that’s too bad. I suppose we’ll be rendering aid to the other group you’re up against down there.”

The comm was silent for a moment, before a confused voice responded. “What?”

“We’re in communication with the group inside the building you’re attacking. They want us to come and get them out of there. In fact, they’re even offering to pay us.” Moira signaled to her co-pilot.

The co-pilot opened communications with the other group. “We’ve just been contacted by the group outside your location. They seem to have casualties of their own, and they’re requesting our help. In fact, they’re even offering to pay us just so we won’t help you.”

The man speaking to the co-pilot cursed. “Of course they are, those bastards. They have no honor. Well, fuck them. We’ll pay double what they’re offering for your close fire support and your evacuation.”

The co-pilot held up two-fingers to Moira. Moira nodded, speaking to the man on the other line. “In fact, they just doubled their offer. Can you match 2000 credits?”

“What the hell kind of ambulance shuttle are you?”

Moira grinned savagely. “A very well armed one. Trust me, you don’t want to be on the receiving end of our close fire support. Can I suggest 2200?”

Moira grinned, and gestured to the co-pilot.

The co-pilot spoke to the man inside the building. “They’re offering 2200 credits, now.”

The man inside the building cursed, loudly, and said, “I’ll give you 3000 if you get in here right now.”

Moira spoke to the man outside the building. “They’re offering 3000 for us to gun you all down when we come in.”

“3500, and we’ll throw in any product they’re hoarding in their damn warehouse.”

The co-pilot nodded. “3500 from them. They said that once you’re dead, they’ll give us anything we want out of your warehouse.”

The co-pilot’s brows raised in surprise, and he gestured to Moira. Moira nodded after a moment, and spoke to the man outside. “The man inside just made us an offer we can’t refuse. Good doing business with you.”

Moira cut off the communications and grinned, gripping the controls and sending the ship in to hover over the warehouse. Her co-pilot spoke with the man inside the building. “Get to the roof. We’re going to make a pass along the building, and then pick you up. You’ve got one minute.”

Moira slid her ship to the edge of the warehouse and shouted at the technicians in back. “Strap in, we’re doing a gun run, and then we’re picking up.”

She nodded to the co-pilot, and with a deft maneuver turned her ship on its side, bringing the top-mounted gun turret to bear on the streets below the warehouse. Her co-pilot took the turret controls and opened up with a blaze of laser fire, the gun spraying down onto the crouched groups of men attacking the building. Gunfire ricocheted off the hull as the men on the street attempted to retaliate, but Moira’s co-pilot expertly picked off anyone who dared fire on their ship. After a minute, Moira righted her ship and pulled away from the ground, moving to hover atop the roof of the warehouse. Six men crouched atop the roof, shielding their eyes from the engine backwash as the Cutlass Red’s rear hatch opened, and the two technicians raced down the ramp. The technicians and the men were back inside within moments, and Moira boosted the engines, taking her ship and passengers away from the warehouse. “We’re on-route to the nearest medical facility.”

The rear hatch opened, and a haggard man wearing a combat harness stepped inside. His face was streaked with dirt and blood, and he leaned against the bulkhead as the ship moved off. “What the hell kind of ambulance are you?”

“A profitable one,” said Moira.