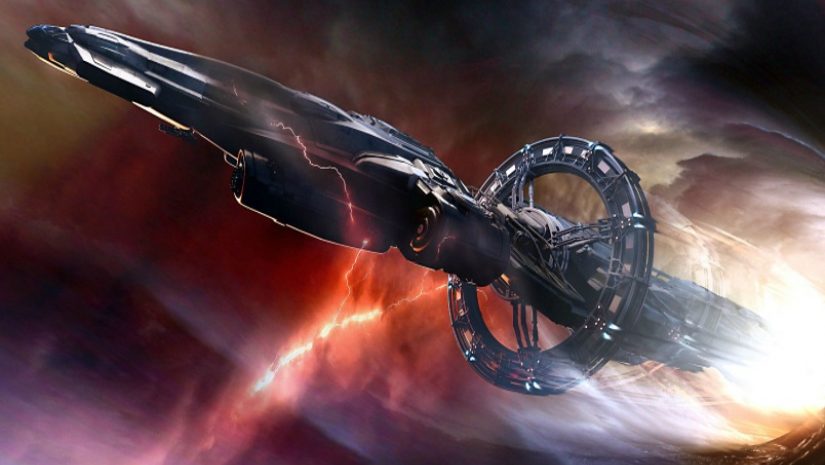 ‘Okay dammit,’ Dannet thought to himself, cursing at his instinctual use of his hated nickname. He’d have said dammit to his using of dammit, but really that would be taking things a bit too far.

‘What do we know. Fact the first; I’m on an Endeavour. Fact the second, it’s dirty, and there appear to be a lot of dead / comatose people. Fact the third, why the hell am I saying “Fact the third” I sound like I have a weird case of brain trauma. Of some sort. And I’m rambling. That’s okay. Rambling when faced with death and corpses is perfectly natural.’

The first body Dannet reached was that of a man, tall, nondescript, but muscular. Lying on the floor, the man was attached to the same feeder tubes and IV lines that Dannet had been. A quick check showed the man was alive.

Dannet scanned the room quickly. Every minute that passed, his legs grew more stable, his faculties returned slowly. There were thirty to forty bodies lying in various stages of dress and distress, and reasons for where he was, for what was going on, started flowing through his mind like molasses. Slow, lethargic, taking their time to connect, not really making much sense even when they did connect.

Dannet was getting better, he wasn’t all the way there yet. But the connections that he could make, the few thoughts that were occurring to him, they were all nefarious. All of them.

‘Well, let’s find out’ Dannet said to himself as he grabbed onto the feeding tube of the nondescript man, pulling steadily till the tube came out with a pop, rolling the man over to his side incase he started vomiting, removing the IV.

Dannet knelt in front of the man, waiting for him to wake up, which took surprisingly less time than he’d have expected. Seconds after he removed the IV, the man’s eyes popped open, met Dannet’s quickly.

‘Uhh… okay, you’re okay, it looks like. That’s good. Umm… I have no idea who you are. Wait, who I am. I’m Dannet. Don’t know where you are though, sorry. Your throat’s sore because I pulled a feeder tube out of it. And you can’t move cause You’ve been drugged for a while, I think. Try to sit up.’ Dannet said, pulling the man up to a sitting position.

Questions from the man flowed faster than Dannet could answer. ‘Why are there so many bodies. Are we on a ship? What system are we in? Who did this?’ etc… etc… you get the idea.

‘So… you don’t know either eh?’ Dannet asked, a small bit of hope seeping away. ‘What’s the last thing you remember before waking up here?’

‘Last thing I remember… I… got hurt on vacation. Broke an arm wrestling a bear-mantis.’

‘You were wrestling a bear-mantis on vacation? Also what the hell is a bear-mantis? No. No. More important, do you remember going to a hospital?’

‘No… no hospital… just remember being picked up by an ambulance, and then waking up here.’

‘Okay,’ Dannet said, looking around at the rest of the room, ‘That’s a start. Can you move yet? We need to wake up as many people as we can, figure out what happened to everyone. I have a theory.’

‘Is your theory that we were taken by some sort of weird space evil scientists who pretended to be doctors so they could grab people on vacation, take them to an Endeavour, pump them full of fluids, and then either experiment on them or sell them as slaves or something?’ The man asked, flexing his fingers and rolling his shoulder. He was coming together a lot faster than Dannet had. Dannet wasn’t jealous. Not at all.

‘What’s your name again mate?’ Dannet asked, standing and holding out an arm for the man to grab hold of.

The man grabbed Dannet’s arm, pulled, and lifted himself to stand, jumping once or twice to test out his legs. He seemed perfectly mobile already, not even minutes after waking up.

‘Me? I’m Moth. Nice to meet you.’ Moth said, sticking out a hand for Dannet to shake.

Dannet took the hand, shook it, grinning. He wasn’t sure if he liked Moth yet, mainly because of the whole jealousy thing, but the man’s enthusiasm was certainly a bit infectious.

‘So, shall we get started?’ Moth asked, looking out at the rest of the comatose bodies.

‘Lets. Do lets.’ Dannet said, figuring that it was good to say something sort of final as a nice place to end the episode.

Do Dannet and Moth rescue people? Does anyone get horribly horribly injured in an escape attempt gone wrong? Do we find out what a bear-mantis really is? WHO KNOWS?! Me, but I’m not telling yet, because that would spoil the surprise, stop asking, geeze!