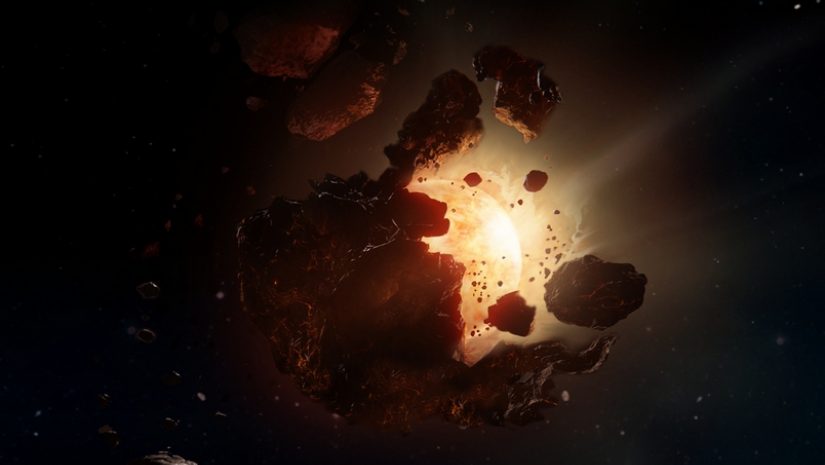 Last time, on Endeavour… The doctor’s looking at my eyes, looking surprised at something. He’s even more surprised when his med kit smashes him in the side of the neck, just below the ear. He...

The doctor’s looking at my eyes, looking surprised at something.

He’s even more surprised when his med kit smashes him in the side of the neck, just below the ear. He collapses to the ground, writhing in pain, but I’m already up and moving, the door hissing open and shut behind me. I’m following Caleb.

The alarm starts blaring before I can even make it to my room. Half of me knows something’s happened to Dr. McBoy, knows I should have stayed with him.

The other half of me wonders idly if the alarm has always gone off daily on the Endeavour, or if the trend only started when I showed up.

Either way, I sigh as the door to my room slides open as I reach it. I know what’s inside. I know that my bed is there, waiting for me, waiting with some music, and a nice glass of Chabliraz. I know that I could lie down in that small, hard bed and sleep for at least fourteen hours straight.

I also know the alarm’s going off, and I can’t mute it in the room. The only way I’m getting to sleep is if whatever emergency’s happening this time stops.

And that probably means finding the crazy girl.

I turn, heading back towards the holding cell she’d been kept in, cringing as the door hisses shut behind me. It feels like it’s calling me out, laughing at me, taunting me.

I hate that door right now.

It’s time to go home, but the alarm going off is… distracting. Making it hard to think, hard to focus. I’ve done a good job so far, avoiding the humans on board the ship.

Not I’ve; we’ve. We’ve done a good job so far. Keep forgetting I’ve got something in tow with me. Fighting for control.

And then I do, sooner than I expected. A long corridor I’m in, it branches right, and left. To the right, an airlock. I glance left just before moving down the corridor, I don’t know why, but I see him there. One of the ones that talked to me, one of the ones that touched and inspected me.

He spots me, starts running my way. I run, as fast as I can, towards the airlock. I’m slower than he is, but I have shorter to go.

I just make it, slamming the door closed, hitting the buttons that I know to hit, starting the sequence to pressurize. The door locks behind me, the human behind me reaching the door, banging on it, just after it locked. I look at him.

He seems… young? It’s hard to tell. He looks concerned. Hurt. He looks like he thinks he’s failed.

I stab at the buttons again…

I reach the door a second too late; it’s already locked, the pressurization sequence has started. I can’t do anything.

‘DAMMIT’ I yell, banging on the door, pained. I… I don’t want to watch th-

The woman’s talking through the comm link on the other side, looking at me. I stab at the comm panel quickly.

‘Stop! Cancel the sequence! We can he-’

She cuts me off.

‘Let me explain.’ she says, and I stop. There’s nothing I can do anyway.

‘I, we, my family and I,’ she starts, and again, looking into her eyes, I feel… I feel something strange.

‘My family and I, we lived for so long, out on the rocks. For so, so long. There were only four of us, my sisters and I, and… we were travelling. In another… long… time… we’d have gotten there.’

She pauses, cocks her head, thinking. I wait, trying to think of a way to stop the pressurization sequence, barely noticing the alarms anymore.

She looks up again.

‘We were alone, the four of us, travelling, for so long. Then… my… youngest? My youngest sister. She… She went to a long sleep, in the explosion.’

It’s hard to judge the woman on the other side of the door. Barely visible through the viewing glass, she’s not crying, but… her eyes.

The sorrow in them is…

‘The machine grabbed all three of us, then,’ she continues. I’ve stopped trying to think of ways to stop the pressurization. It’s counting down. Nothing I can do, nothing I can do but listen.

‘My…eldest? She went away in the things that grind. I don’t know what happened to my other sister. She got lost, lost in the… chaos? I… I don’t know how I made it through. Made it, survived, bbbroken though I was.’

The stutter surprises me, but I can see she’s… choking? It’s like she’s trying to cry, but doesn’t know how.

‘I floated there, floated for too long. And then I saw them, the two, this one and the other. I grabbed the other… they had to.. had to pay.

I made them pay.’

She hits a few buttons on the console, and a warning sounds. ‘Caution – pressurization not complete. Opening airlock could cause…’ The warning cuts out as she hits another few buttons.

The ship chimes in again. ‘Airlock opening in 10…

‘I’m sorry about this one though,’ she says, smiling as the ship counts down. ‘She was…  ‘ she pauses, thinks.

‘She was nice.’ She says, as the countdown hits four.

I reach my hand to the glass, crying.

‘Now I’m going home,’  she says, reaching a hand towards the glass, a tear falling.

Her hand doesn’t make it to the glass before the outer airlock doors fly open, and she’s sucked back at speed towards them. Her head smacks hard against the wall as she cartwheels out, blood and her body flying out into the void.

What happens next week on Endeavour? Who knows! Dannet is entirely too sad to think that far ahead right now!