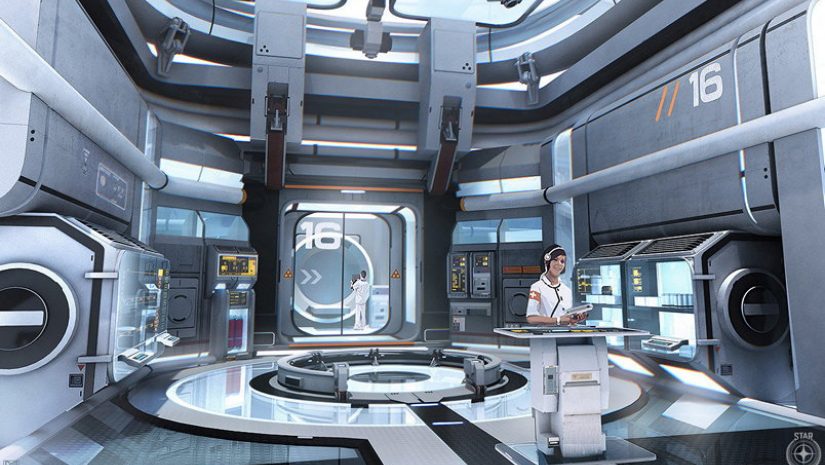 Getting Fired: Ed's Note: Hello Citizens, Erris here, Director of Fiction for The Relay. We'll be changing up our Fiction publishing schedule a little as of, well, today. From now on, on Sundays, I will...

My parents always asked me why I wanted to be a doctor.

‘The autodocs nowadays, zey do everythink – why you want to become a doctor?  Go be something important, like a marine, or a repairman.  Go do a REAL job!’

Real nice of them, right?

As a kid though, I watched a show.   A docu-drama.  How I found it, out of all the thousands of shows on mg.Watch, I don’t remember.   S*T*F*F*H it was called: Surgical Transport and Forward Field Hospital.  It was a terrible acronym for an even worse show, all screaming and blood everywhere, everything was over-acted and under-produced, but hey, I was a kid!  I was hooked.

I mean, my first memory of the show is watching Mansfield Stashmaster, his magnificent moustache somehow clear of the blood spatter that covered the rest of him and his assistants, watching him elbow-deep in some poor idiot’s chest, pumping his heart with his right hand to keep him alive, while giving CPR to a half-naked green lady on his left. If that’s not inspirational and life-changing to a three-year old, I don’t know what is.

S*T*F*F*H was my childhood; it was my babysitter.  The nurse from it, Virginia Bust – she was my first crush.  Mansfield was both my father and older brother – a man I looked up to.

Three months later, after being given an extensive and intensive overview of how to press the ‘heal’ button on an Auto-Doc,here I am.

A medical doctor.  Board-certified.  Residency completed.  I’ve got ph.Ds and M.M.Ds and A.M.Ds and all other sorts of D’s hung up on my wall, framed and gilded.  And yet, all the same, here I am.

And wouldn’t you believe it?

My right hand is elbow-deep in some poor screaming idiot’s chest, pumping his heart with my right hand to keep him alive, and I’m giving CPR to a half-naked purple lady on my left.  Her lips feel fake, and she keeps trying to slip me tongue.

‘Cut’ the directors scream comes in loud over the intercom, and all I can think is, well it’s about bloody time, isn’t it?

The camera spheres fly off to their charging stations.  We’ve only got three of them, and they’re an ancient model.  They have to recharge every three hours.  What I wouldn’t give to work on a real set someday, with hundreds, thousands of the little cameras, able to catch every inch, every detail of the actors and the set.

Acting… how did I get stuck acting, of all things, I think to myself for the millionth time as I head over to the cleaning station and start washing the fake blood and viscera off my hands, pulling off the fake moustache I’ve been wearing.  Yes, Mansfield was my idol, but…but as a doctor, not as an actor!  And even as a doctor, he was my idol more in…in countenance than in skill.  He was a horrible doctor and an even worse actor.  I wanted to be better than him!

I dreamed of being better than him.  Of being a real doctor, saving real patients.  Called to the front-lines, I’d be a combat medic.  Or I’d study rare neurological diseases at one of the Universities, saving people the rest of medicine had given up on.

And then the director puts his arm on my shoulder.

‘Look, James my boy, I’ve got some news,’ he says while pulling the whole pat on the back, friendly smile thing.  It doesn’t work.  It never works.

I glare at him, like I have every day for the last two years.  Stupid job.  How did I end up being an actor?  I’m a doctor – not an actor.

‘James, James, James… there’s no easy way to say this,’ he says as we walk towards his office.  ‘So I won’t try to sugarcoat.  We’re killing you off.  You die in the middle of the next episode.’

‘Wait – the middle?  I don’t even get a cliffhanger?’ I ask.  Not that I really care, but… damn, that’s kind of heartless.

‘Sorry kid – the middle,’ he says, punctuated with another pat on the back.

‘I don’t know, kid.  You’ve got one more episode to film, so I’ll see you tomorrow for that.  And then, well, good luck!’  He pats me on the back once more, heads into his office, and the door slides shut behind him.

So here I am.  Staring at my ex-director’s door, no longer an actor, never a real doctor…

*End Episode 1!  Tune in next week for Episode 2: Getting Hired