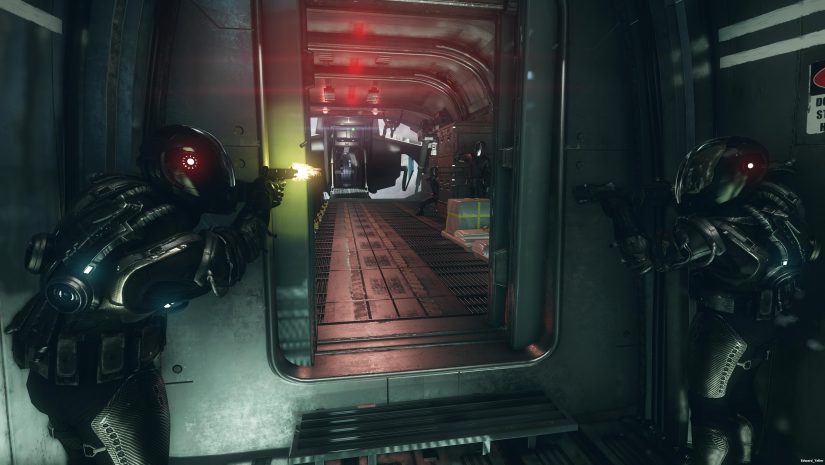 “What’s going on?” asked Mitchell as the drop ship came to a shuddering halt. “We’re disembarking. Stay with Corporal Avery and keep your head down if things go south. And, for your sake, make sure...

“What’s going on?” asked Mitchell as the drop ship came to a shuddering halt.

“We’re disembarking. Stay with Corporal Avery and keep your head down if things go south. And, for your sake, make sure you keep your helmet on,” Gunnery Sergeant Lucas snapped, picking up the reporter’s helmet and dropping it in place on Mitchell’s head before he could respond.

Mitchell frowned but did as he was told, tapping the helmet’s seal and watching as the sound of the marines checking their gear filtered through the aural capture suite on the helmet. He clenched his teeth as the rear door opened and the marines streamed out in a smart and orderly fashion, spreading out to cover multiple angles as they moved. Corporal Avery paused a brief moment, then tapped Mitchell on the shoulder and stood up, moving into the formation of Marines as they rushed for a nearby building. The Marines were nearly impossible to see in the dark, their reactive camouflage and heat-dissipating under suits rendering them as close to invisible as conventional technology could achieve. Mitchell’s own black environment suit almost seemed laughably visible in comparison, despite the area being pitch black. Mitchell released the hovering drone camera as he moved, setting it to follow him. The drone camera hummed quietly, almost seeming loud as the Marines stacked up next to their point of entry for their operation. Mitchell focused the camera with a series of gestured commands; the drone’s controls were situated in the special gloves he wore, allowing him the freedom of doing his work without needing a camera operator.

The Marines communicated silently, using simple hand signs as they organized themselves and prepared for their breach. There were four fire teams of three, and each fire team had an assigned job. Mitchell had been working with these marines for the past few weeks, doing a piece on outer territory crime and the UEE’s response amid the growing concerns over the Vanduul. The UEE was happy to have Mitchell along, doing patriotic pieces to allay the citizen’s fears, and nothing was more patriotic than showing the UEE’s finest kicking some tail and taking some names.

The breach happened fast, two marines setting charges on the locked door to the compound and engaging them. The charges burned white-hot with very little noise, melting through the lock on one side and the hinges on the other, and the door simply crumpled inward. One marine threw a grenade as the door fell, and the marines were inside after a thunderous concussion and flash of light. There was the hissing report of silenced weaponry spitting death, and then Corporal Avery tapped Mitchell on the shoulder and gestured him forward.

Mitchell grinned and gestured the camera inward ahead of him, following behind the Marines as they began clearing the compound out ahead of him. The action was just ahead, the fire teams clearing the building room by room. So far, they had met no serious resistance, just stunned criminals stumbling in the dark for guns they would never reach, a whispering double-tap putting them down. Mitchell’s camera hovered over the shoulders of one fire team as they opened a room. The camera’s filters protected it from the concussion grenade the Marines threw, and then the fire team was inside lightning-quick, guns training on moving targets. Two people clutching at their eyes and reaching for holstered weapons were blown away by one Marine covering the left, while a third man who was on the floor and dazed by the explosion was knocked unconscious by a swift Marine boot and secured with binders.

Mitchell’s camera panned over the room as he gestured, taking in the chemical manufacturing stations and noting the packages of vials of murky blue liquid. They’d been making street drugs here, by the looks of things. Once he was satisfied with a few careful closeups of the walls ‘spattered with the blood of the unrighteous’ and close-ups of ‘the weapons of the destruction of our great society’, he moved on, looking for more rhetoric among the carnage. This was going to be a great piece.

The Marines were done. Mitchell could tell by how they moved slowly, guns lowered, a few taking up guard positions at the compound’s entrances, while others moved from room to room. Gunnery Sergeant Lucas had produced a holopad and was snapping pictures of the corpses, weapons, and drugs in each room, forming a catalog of their victory. Mitchell got a few shots of the Marines’ intense stares and warrior eyes, their grins and jokes carrying the edge of men who have come close to death, only to be the dealers instead of the receivers. Mitchell moved into one of the rooms, his camera capturing a simple desk made from stacked chemical storage crates. A few data pads sat on one end of the makeshift furniture. Mitchell picked them up and activated them, idle curiosity driving him. The data pad hadn’t been secured and had just been in use, judging by the indicated open lock screen. The man with two holes in his chest behind the desk probably had been about to use it before being rudely interrupted by the Marines. “Hold up there,” came a low voice.

Mitchell turned to see Corporal Avery scowling at him. “The Gunny hasn’t been through here yet. Don’t touch anything.”

Mitchell smirked and shrugged. “Sorry,” he said, setting the data pad back down. Avery stepped back through the door, moving to the hallway to address Gunnery Sergeant Lucas. While Avery’s back was turned, Mitchell picked back up the data pad and turned it on. To his relief, the device hadn’t locked yet, so he tapped the most recent accessed files. A grin spread across Mitchell’s face. “Oh, this is good. Gunnery Sergeant Lucas! I’ve got something you’ll want to see!”

Gunnery Sergeant Lucas strode through the door and glanced at Mitchell. “What have you, Mister Alverez?”

Mitchell offered him the data pad. “This was unsecured, but don’t deactivate it or it’ll lock itself. It’s got a list of clients. You should transfer the file of names to your data pad, use it to do some digging. It could lead you to some major busts!”

Lucas frowned. “Nice work, Mister Alverez. I’ll take that.” He took the offered pad and tapped the device a few times, transferring the data, and then tossed it back on the desk. “Also, don’t touch anything until after I’ve documented it. We gotta be meticulous about this. If we get intel on this group’s higher-ups, we need all the evidence we can bring against them to hold them accountable for their work against the UEE.”

Mitchell nodded, subtly focusing the floating camera on Gunnery Sergeant Lucas as he spoke, and then moved back into the main room of the compound. The Marines were stacking all the chemical manufacturing equipment and drug vials in the middle of the room, while an ordinance-trained soldier worked on setting charges around the base of the pile. “Asset denial, Mitch,” said Corporal Avery.

“This’ll make a great shot,” said Mitchell, focusing the camera. He checked his personal data pad as the Marines worked around him, smiling at the file he’d transferred. He’d have plenty of new stories to write, soon enough.

“The operation was a success. We took down the manufacturing facility. We secured and destroyed any assets we found, and we expunged the electronic data from all the pads.”

“How was our embedded Mister Alverez?”

“The same. He was a bit overeager, got his hands on a data pad, but I don’t think he knows what he was looking at. He seemed more focused on the glory and spoils of war, per usual. He makes my Marines look good.”

“Excellent. Keep him on a short leash. We don’t want the reason behind the operation getting out. We have to stay above the trash. The administration couldn’t handle a scandal during this time of unrest.”

“I don’t think we have to worry about Mister Alverez. He’s a good little patriot; a good citizen. He’s hungry for the action. He wants to show the government in a positive light, and he does a good job of polishing the tarnish away.”

“Keep it that way. Understood?”