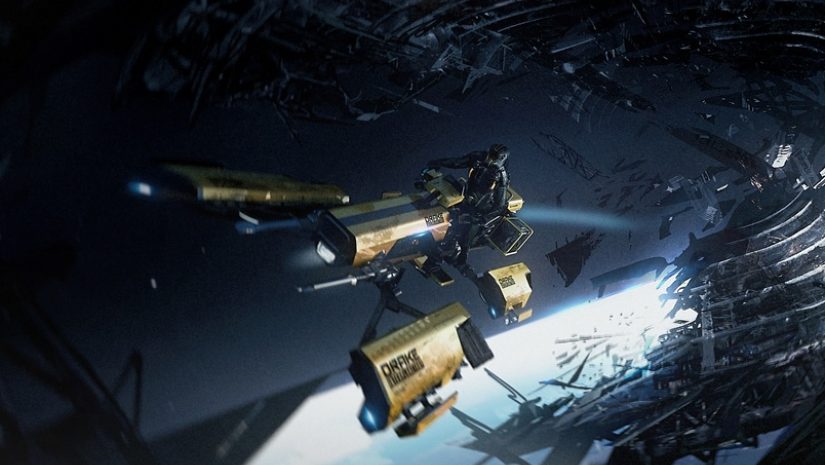 Hello fellow Citizens, Zulu awakens in Chapter 3 of Dragonflies in the Dark!

Captain Titus rises from his chair and nods to Beth, “How is he?”

“Seems somewhat disoriented, sir.” Beth says stepping aside to let him pass. “He knows who he is and where he is though.”

Titus motions for Archer to follow and gives Beth an affectionate pat on the bottom on his way past, moving into the corridor. “Does he have any physical injuries that you can see?”

“There seem to be two contact burns on his wrist where his mobiGlas sits and upon examination he has a barely detectable arrhythmia to his heart.” She explained, “Nothing that will affect him in the long term though.”

“Do you have any theories on what could have caused those injuries? Must have been something to do with his mobiGlas… Archer, you said it overloaded?” Focus knotting the wrinkles on Titus’ forehead.

“Yes sir, Zulu reported the overload just before we lost contact.” He answered in the wake of Titus as he followed him down to the infirmary.

The small group entered the infirmary to see Zulu sitting up in bed, wrist cleanly wrapped and monitor leads attached to him in various places tracking his vitals. A small smile crosses his face at the sight of company. “Captain sir, Archer.”

Titus smiles at the sight of his crewman once again conscious. “Zulu! How are you feeling? Can you tell us anything about what happened to you?”

“Can’t say for certain, Captain…” Zulu answers thoughtfully. “I remember talking with Archer, doing a scan with my mobiGlas and pulling the information about the Ponderosa, I think I briefly saw a shadow just before my mobiGlas overloaded and gave me a severe shock and then nothing.”

“You said shadow, what do you mean shadow?” Archer interjects before Titus can weigh in on Zulu’s response.

“Yeah… I know. Kind of a weird thing given it was almost pitch dark in there before but the light from my mobiGlas was enough… I saw something. I think there’s something on that wreck.” Zulu says reluctantly.

“Would explain how he made it from the inside to the outside, sir.” Archer gives the captain a thoughtful look as he considers the new information being presented. “The next question though is, does this ‘entity’, thing, being, whatever you want to call it mean us any further harm. Was that just a warning shot off the bow?”

The group is silent for a few moments, each taking some time to theorize. Archer is the first to speak again, “We need to go back in there, sir. As dangerous as it may be we have to find out what the hell is in there.”

“It might not have been a warning shot per se… perhaps more akin to a defense mechanism?” Captain Titus muses, stroking his beard. After a long pause he continues, “Even despite that consideration, I am tempted to agree, Archer. That wreck could contain some pretty incredible tech. We need to at least get a better look. How do you feel about us exploring this further Zulu?”

“Not to mention finding out the truth about what actually happened to the Ponderosa all those years ago.” Zulu replies, moving to unhook the leads attached to him.

“Wait a moment, where do you think you’re going?” Beth asks staying his hands.

“You came back on the back of Archer’s Dragonfly, unconscious… you are in no shape to wander back out into the field so soon.” Beth says firmly, looking at the captain for back up.

“Oh will you both just cool it!” The Captain says with a clear tone of exasperation. “We’re not sending Dragonflies this time… the Monarch will take a look herself. Come hell or high water we are going to find out what’s out there.”

“Captain… there’s no water, we’re in space.” Archer replies with a grin.