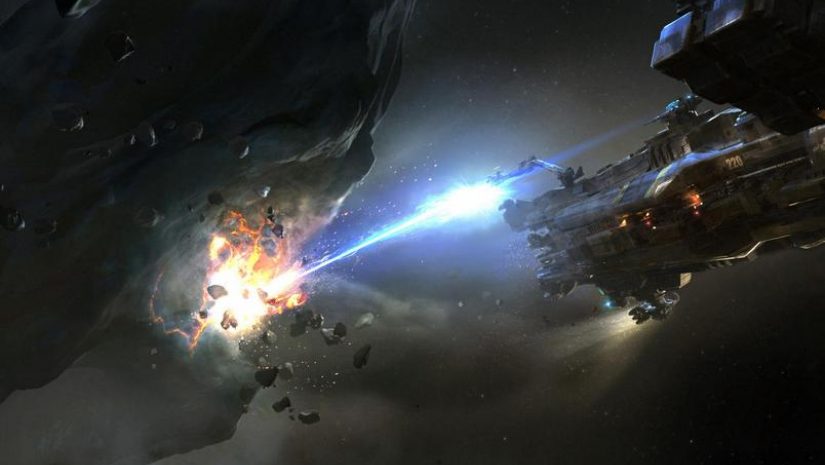 Hello readers! I hope you enjoy the story. I highly recommend reading Dorf the Mining Maiden – Chapter 1 if you haven’t or if your memory is fuzzy.

“Lena, you wreck this ship and I’ll… well, we’ll all be dead so try to avoid that. Please.”

I stare at the sensor display and watch as the jagged asteroid slips just by the Vesta, missing her by only 3 meters.

I run my hand through my short dark hair and let out a deep sigh of relief.

Patting Lena on the shoulder I mutter, “I’m sorry Lena. That was just… too close.”

I’m not sure if any of you remember me but I’m Dorf. Fucking ugh. D – call me D. Captain D these days.

Against all recommendations, we had decided to attempt mining the Glaciem belt in Nyx in an Orion. The Vesta. At this moment I really missed Frank, he would have known exactly how far to push this and how much to risk. I had served as his Scanner Operator for a long time but as a Captain I was green. Really green.

Six months ago I took command of the Vesta, formerly Rock Crusher. We had decided to do a shakedown tour due to the ship having a number of new crew. My new Scanner Operator is Priscilla. Refinery Operator is Klaus and Tora is Cargo Operator – both also new. My Pilot Lena stayed on with me after Frank died along with Peter who had been Beam Operator for many years. There was also Gerard, a rickety old robot who attempted to keep the Vesta clean enough to live in. He’d been around forever.

So to start we had just visited the Aaron Halo asteroid belt in Stanton. As a shakedown cruise it went well, but the challenge was minimal as was the payoff.

The Aaron Halo was too easy – lulled us into a false sense of security, so off we went to a much more difficult task – Glaciem.

Our quarry in Glaciem is gold. It’s in there… but a lot of the easily accessible hunks of rock had been completely stripped. However, one of the side effects – and big dangers – of the belt being so dense was that everything moved around… a lot.

I glance over at Priss and in as even a voice as I can manage I utter, “Find us something Priss. Let’s mine this fucking place and get the hell out.”

A subtle nod from my SO. She is completely concentrated, not even noticing the few strands of her long blond hair that are falling in front of her eyes.

Moments later I see an RMAP fly out ahead of us and bury deep into an asteroid shaped roughly like Klaus’ head – big, blocky, slightly rounded.

After a quick, but enthusiastic fist bump with Priss, I key up the comms and shout, “Peter. Do your thing, chop her up.”

“Tora, Klaus – you have incoming work. Be as efficient as you can with this one. I’m tired of this place, let’s get some credits out of this rock and get out of here.”

“I’ll be in the back for a bit, just shout if something fucks up.”

I trusted my crew. Now that we are started, things should go smoothly.

Striding inside the body of Vesta, I sit at a terminal and begin studying our most recent info on gold group metal prices in nearby systems. I sure as hell wouldn’t be able to sell this shit at Delamar, not if I wanted to break even.

Goss! Right, the jewelers on Cassel have a materials shortage. It’s four jumps but the fuel will be more than worth it…

I sprint up to the bridge, “What the fuck is going on?”

My legs carry me faster than I had ever moved as I sprint the length of the massive mining ship.

I throw myself bodily into the turret gunner seat and deploy the turret. The radar lights up – two Cutlasses and a Caterpillar. Son of a bitch.

The Cutlasses are using every ounce of their maneuverability to avoid Peter’s beam – Hilda will slice and dice almost any ship she contacts.

The Caterpillar is creeping up behind Vesta. I light them the hell up. Arcs of laser bolts streak out and slam into the pirates’ cargo ship. I focus on taking out their weapons. We are outgunned but the Vesta is a tough old beast.

I’m feeling the heat a bit as the Cat returns fire but their gunners can’t land a direct hit on my turret.

I grin as I gradually blast away all of their weapons and they begin to turn to retreat. I grin wider as about ⅔ of a powerless Cutlass drifts by, obviously the victim of Hilda.

Vesta shudders again and I suspect we took a few missile hits from the other Cutlass.

As the Caterpillar exposes her engines to me, I rake laser fire back and forth across them mercilessly. A small explosion on her aft causes the Cat to pitch wildly and all power on the cargo ship fades.

Sitting around the mess table for dinner hours later, we’re all grinning. Minimal damage, a hold full of copper and gold.

Gesticulating wildly, Tora gushes, “I killed a fucking pirate ship! He made a wild turn to avoid Hilda and I used the tractor to grab him and slam him into that asteroid. He blew up huge!”

I pitch in, “I’m so glad Frank sprung for the aft turret. I don’t think they expected it.”

“To Frank!” The cheers rings out, tankards lifted and smashed together.

I take a long swig of Klaus’ Refinery Ale and relax in my seat.

“Lena, after dinner can you plot us a course to Cassel? We have some damage to repair and some money to make.”