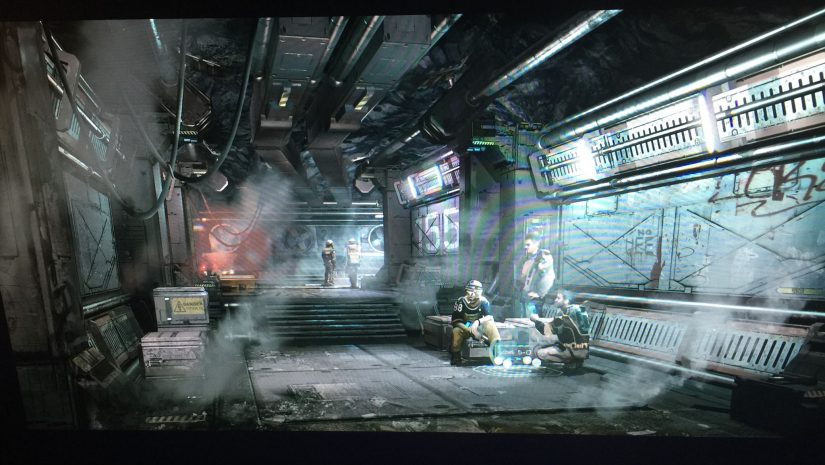 Criminal Element III Written Wednesday 15th of July 2015 at 11:00am by PropMaster

Author’s Note: Today, we continue the adventures of Captain Ray as he hunts the criminal element of the UEE, starting with Larcom’s Governor, Sabine, who has taken hostages aboard his ship, the Diamond of Larcom.

Sergeant Baxley cautiously peered down the empty docking corridor, watching the closed hatch of the Diamond of Larcom with care. Her fireteam had arrived two hours ago, after a call for assistance with a hostage situation came from Station SV-109. Captain Ray’s target, Governor Sabine, had taken the crew of his ship hostage after they’d refused to undock from the station. Due to the tenuous nature of boarding a docked ship, they’d been forced to wait as workers had EVA’d to the ship and attached additional docking clamps, as well as disabled power to the engines through a few carefully sabotaged fuel lines. The ship was going nowhere, and Sabine was trapped, though he didn’t know it. “Has the governor made any further demands?”

“Just the same as the last hour. He wants his ship released and a guarantee of safe passage to non-imperial space,” came Captain Ray’s reply over the comms.

“Beautiful. Do we have any live feed inside, yet?” Sergeant Baxley asked tersely.

“Yes. This particular constellation has a few security cameras installed as a safety precaution. We’re finishing the hack now, we’ll be able to have a view inside in moments,” Lieutenant Makeno’s voice replied.

“Good. I want the feed patched into my HUD as soon as you have it. Baxley out.”

Sergeant Baxley turned to the three marines under her command, speaking directly over their comms. “I trust that all of you have reviewed the cabin design thoroughly, so I shouldn’t have to go over this more than once. This is standard procedure, flash and clear, emphasis on hostage rescue. As far as we know, Governor Sabine has only one weapon, a medium-caliber kinetic-ammunition pistol. Your suits are designed to take a hit from something like this, but don’t get cocky. A hit will still put you on your ass, hard. We’ll be using less-lethal stun rounds in our primary weapons for this operation to minimize potential injury, but you should keep your sidearms loaded with lethal rounds in case things turn sideways. We want to rescue the hostages, priority one. Priority two, take Governor Sabine alive. If he thinks he can escape justice at the end of a bullet, he’s mistaken. Ooh-rah?”

“Rah, sergeant!” The marines replied as one.

“Go time in three, kids. Strap up and tape down, we want a silent approach.”

The marines huddled together, checking and rechecking their kits for anything that moved or made noise. Once they were satisfied, they grabbed stun rounds out of the ammunition box they’d humped to the impromptu command center and loaded their weapons. Sergeant Baxley checked her own kit, taping down a few loose bits of material, and then waited patiently for a call from Lieutenant Makeno.

She didn’t have long to wait. In a corner of her hud, a small box opened up, displaying a live camera feed from the interior of the Diamond of Larcom. The hostages were in a group on the bridge of the ship, two of them kneeling next to a third man on the ground. The man on the ground lay in a pool of blood, unmoving. One man stood apart from the group, pistol trained on the hostages, with his back against a bulkhead and a clear view of the approach to the bridge. Baxley grit her teeth, grinding her molars together as she assessed the situation, while Makeno’s voice filtered through her comms. “Sergeant, the man standing apart from the group of three people is confirmed to be Governor Sabine. As soon as you’re ready on your end, we’re ready to begin as well.”

“We’ve just been waiting on you, Lieutenant. Leave it to the chair force to hold the ground pounders up, eh, Sir?” Baxley said with a smirk.

“Same as it ever was. The mission is yours, Sergeant. We move on your call.”

“Roger that,” Baxley said, turning to her fireteam. “All right, we’ve got a live feed inside the ship, and our hostages and target are in the bridge. Hostages are on the ground, sitting or lying down, target is standing and armed. He’s on the left side of the bridge, back to the bulkhead, with a clear view to our entry point, and he’s armed. Less than ideal positioning, but a flashbang will sort that out quick. I’ll take point. Corporal Bough, take drag and watch our asses. Lance-corporal Dilkey, take left side, Private Hitts, take right. Don’t forget to check your corners. This isn’t a standard constellation-class ship, so we may have some surprises in store. Hopefully our fine friends outside will help with that. Ooh-rah?”

“Seal up and move out, marines!”

The marines tapped commands on their suits as one, sealing the pressure seals on their helmets and activating their internal life-support—standard procedure for boarding actions. Sergeant Baxley led them on the short jog down the docking corridor to the hatch of the ship, pressing herself against the hull. Her three marines stacked up behind her, tapping shoulders to indicate readiness. Baxley waited for the return tap, and then keyed her comms. “Lieutenant, we are go.”

A second later, the ship and the outside corridor went dark with a flicker and pop of static discharge. The hardened HUDs of the Marine’s helmets and comms stayed alive. “Pushing in!” Sergeant Baxley shouted, moving to the hatch and popping open the cover on the manual override. She gave the toggles inside a quick pull, activating the hydraulic back-up systems to the door, and then stepped back as the door opened with a hiss and a clean-sounding whine. She tapped her HUD, activating the built-in IR vision, and the compartment ahead popped into view in a haze of grays. She turned on the infra-red lights built into her helmet, brightening the area further, and then pushed in, weapon up and sweeping right, towards the door to the bridge. The fireteam moved on her heels, each member covering their assigned sector. They stacked up at the door to the bridge. Baxley readied a flashbang grenade, and waited for the tap on her shoulder to let her know the fireteam was ready. The tap came, and she pulled open the manual override and pulled the toggle switch. As the door opened, she pushed the primer on the flashbang once, setting it for a one-second timer, and then threw it into the room. “Flash out!”

Baxley raised her weapon and blinked at her hud’s dampers, alerting them of the incoming sound and light. As the flashbang lit off a moment later, she was already moving, the sonic thud of the grenade causing a chorus of gasps and yells from inside the bridge. She stepped through the door and swept her rifle left, ignoring the dazed hostages sitting on the floor. “Imperial Marines, don’t move! Don’t move! Stay down!” she yelled through her suit’s comms, broadcasting it loudly through the room.

Governor Sabine was nowhere in sight.

Baxley glanced at the feed of the bridge on her HUD, and noticed that it wasn’t updating. Sabine was still where he was, albeit in the dark. A loop?

Gunfire erupted from behind her.

Baxley cursed and spun on her heel, moving to the hostages and shoving them to the floor as kinetic ammunition spat through the doorway. The firefight lasted a few eternal seconds as the well trained marines shifted through the doorway through the bridge, one of them being drug on the floor by the back of his combat gear. Baxley crouched in front of the hostages, keeping her weapon trained on the doorway as her marines transitioned through and took up firing positions on either side of the door.

Baxley moved to her downed marine quickly. “Bough? You alright?”

Baxley checked his chest, feeling over the Corporal’s ballistic vest and finding the dent. “No penetration, Corporal. Catch your breath and then get your ass up.”

Baxley moved to the doorway and primed another flashbang. “We’re gonna push through. Hitts, keep up that suppressive fire. I want that asshole’s head down until we’re right on top of him. Dilkey, on my six. Flash out!”

The grenade spiraled into the darkness, Baxley counted to two, and then moved as Hitts opened up, fully-automatic, rounds passing to her left as she and Dilkey moved right through the door. The flashbang lit off a moment later, the sound still overwhelming her helmet’s audio and the concussion of the burst rocking her on her heels. Unlike Sabine, however, the marines had trained for that.

She motioned for Hitts to hold his fire as she stepped into the recreation area, sweeping her weapon behind the bar where the gunfire had originated. Governor Sabine was curled back, rubbing at his eyes, when she shot three stun rounds into his side. He yelped, falling back, and Dilkey put a fourth stun round into his gut, knocking the wind out of him. Sergeant Baxley leapt to the deck immediately, letting her weapon swing on its harness, as Sabine writhed on the ground, gasping like a fish out of water. Sergeant Baxley roughly flipped him onto his face, slamming his jaw into the deck and grabbing his hands. He resisted limply, still unable to catch his breath, as she placed restriction cuffs onto his wrists, binding them behind his back.