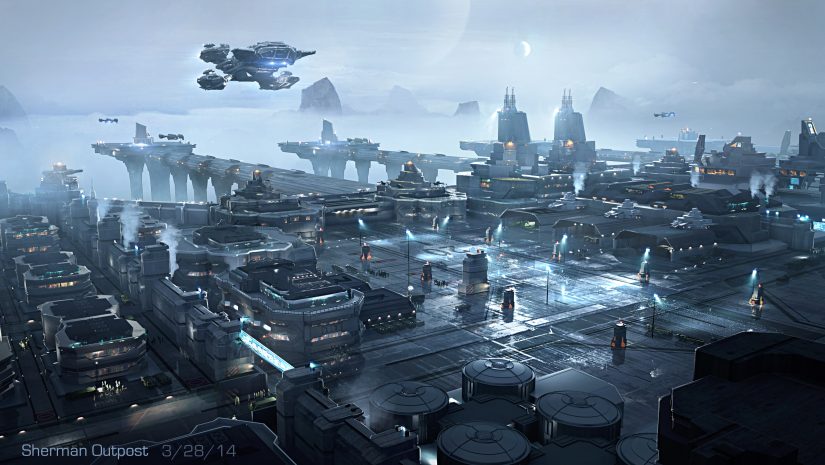 Criminal Element I Written Wednesday 10th of June 2015 at 01:00pm by PropMaster

Author’s Note: What’s up, ‘verse? This is the start of a new short SC Fiction Series. I felt something a little more long-form would be fun to try out. Please enjoy the drama and action...

Author’s Note: What’s up, ‘verse? This is the start of a new short SC Fiction Series. I felt something a little more long-form would be fun to try out. Please enjoy the drama and action as Captain Ray and the UEE Raptor Wing hunt down the scum who dare to cross the Empire!

Captain Ray had joined the UEE fresh out of university, with an advanced degree in criminology and psychology, and had been placed immediately after Officer Candidate School into a detail on the outer colony worlds of UEE-secured space, overseeing a police action in one of the roughest sectors of “secure” space. Secure being a relative term, of course. Since his arrival in low-sec space, he’d been involved in a dozen successful actions against pirates and criminal organizations around the sector.

His most recent assignment was his second as a Captain, in charge of an older Strike-class Cruiser, the UEE Raptor Wing. The colony he’d been assigned to police was located on a rocky mining world known as Larcom II, a nasty barely-habitable, frozen planet with incredibly rich resources scattered through its crust. The primary exports of the planet were tylarium, a rare mineral used for high-end power plant casings and radiation shielding, and water, which was harvested from the massive frozen-over oceans that surrounded the mountainous terrain.

When Captain Ray had arrived, he’d found himself taking over for a jaded Lieutenant Brahm, who simply slapped him on the shoulder, said “good luck”, and spat on the deck on his way to the carrier taking him to his newly assigned post deep in secure space.

Ray’d had his work cut out for him. The police action he’d taken  charge of had been called in at the behest of Larcom II’s previous planetary governor, who’d been assassinated within days of the request for aid. Larcom II had a large anti-government presence, and the local police forces had begun to be overwhelmed, forced out of significant portions of the city by these anti-government groups. Captain Ray had quickly learned that the lieutenant governor, Kris Sabine, had retreated to a private space yacht for a three month cruise, leaving only a few frightened cabinet members to oversee the colony. Lieutenant Brahm had declared martial law two weeks prior to leaving, due to the deteriorating situation between the criminal element of the colony and government forces. There had been clashes between UEE patrols and street gangs every day since the announcement.

Captain Ray had taken control of the situation immediately, calling together the two-hundred military personnel he’d been placed in command of within a week of his arrival. Their attitudes were not encouraging, ranging from disinterested to resigned. Ray stood before them in a cleaned-out school auditorium, abandoned in the wake of the civil unrest. He looked pointedly around the empty room. “This place should be full of children, today.”

The assembled men and women before him glanced around the auditorium, taking in the stark contrast of quiet to the noise that filled the streets and buildings around the colony as gangs of unruly citizens looted and clashed with the police forces. Captain Ray allowed them the moment, allowed them to soak in how far the colony had fallen, before he spoke again. “The planetary governor closed the schools, prior to his assassination. He feared for the children of his people.”

Ray slowly walked before the assembled soldiers as he spoke, the empty auditorium amplifying his voice. “Today, we faced down groups of armed anti-government gangs. We made hard decisions, and in some cases these decisions resulted in lives lost. I would never deny any of you the right to defend yourselves. I know that the conditions here, facing civilians we have been sworn to protect as hostile combatants, are not what any of us signed up for.”

The soldiers stood, still, no murmurs of assent or questions raised. Captain Ray expected nothing less. “While you were acting under my orders, I led a squad to the government offices to assist with evacuating valuable personnel. In the process, I learned a few things.”

“First, I learned that three months ago, the planetary governor fell ill with a terminal disease. This knowledge was kept secret, as he wished to maintain a modicum of order while he arranged for a smooth transfer of power.”

The soldiers shuffled slightly, some heads turning to look at him with curiosity. Captain Ray decided to allow the small break in decorum. After all, he was just getting warmed up.

“Second, I learned that, three months ago, the lieutenant governor, Kris Sabine, was given full authority to carry out government work in the name of the planetary governor as part of this transfer of power.”

“Third, I learned that three months ago, these anti-government groups did not exist.”

Captain Ray turned to face the group of soldiers, face stony. “Ladies and gentlemen, we’ve been lied to.”

“Three months ago, Lieutenant Governor Sabine enacted sweeping tax reforms and laws removing many UEE-sanctioned labor regulations. He used the cover of the transfer and his temporary authority to create hazardous—yet extremely lucrative—work environments in the mines and water treatment and processing plants.”

Ray began pacing again. “I further learned that Lieutenant Governor Sabine made a number of large credit transfers to one Lieutenant Brahm, UEE, through a private account.”

This evoked a reaction out of the already shaken soldiers before him. Captain Ray allowed them their moment, before he turned on them with a swift stomp of his boots. “Atten-hut!”

The assembled men and women snapped to attention, falling silent. Ray continued to speak. “While I have not verified this information fully, an investigation is underway. In the mean time, I wish to stress upon all of you the importance of this information.”

Ray stepped forward until he was nearly nose-to-nose with the front rank of soldiers. His voice grew soft, striking the importance of his words into the minds of his men and women, as he said, “We are not dealing with criminals. We are dealing with citizens of the UEE, in protest of unlawful regulations and unsafe working conditions. The criminal elements of this planet, as it turns out, are not the civilians we’ve been sworn to protect, but the government agents who were supposed to be upholding the laws of our great Empire.”

Ray allowed a small smirk to grace his stony visage. “Rest assured, though, these oversights will be dealt with. This isn’t the first time we’ve gone into a situation with faulty intel, but now that we’ve got our sights dialed in, we will not fail in our duty.”

“As of this moment, I am declaring Lieutenant Governor Sabine as a traitor to the Empire, and a criminal who will not be allowed to escape the wrath of those he has wronged. He will be retrieved, and he will be returned here to face the justice of the people he has wronged.”

“New orders and details will be assigned immediately. Dismissed.”

Captain Ray spun on his heel as the assembled men and women filed out, heading for their posts for reassignment. Ray accessed his Military-spec Mobi-glass, opening communications with the combat information center of the UEE Raptor Wing in orbit. “I’ve informed the men. Do we have a lock on Lieutenant Governor Sabine?”

His comms officer, Lieutenant Makeno, responded immediately. “We’ve got his private ship docked at a spaceport one sector over. They’re taking on fuel and supplies. Local military assets have been notified.”

Captain Ray chuckled, tapping the side of his temple. “I’ve got a feeling Lieutenant Governor Sabine’s cruise is about to be cut short. I’ll be aboard within the hour. Ray, out.”

Captain Ray strode towards the nearby UEE shuttle, smiling to himself.

The hunt was on.