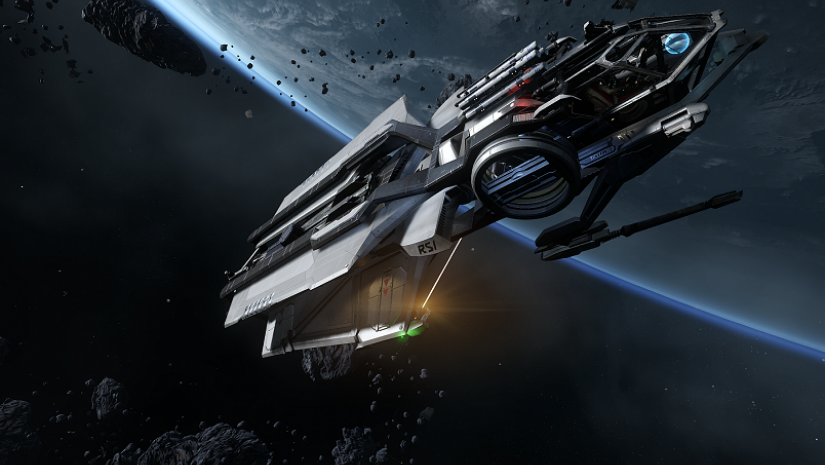 Hello ‘Verse!  Erris here.  This week’s Fiction piece, Cat’s Cradle, is by our newest writer here at The Relay, PropMaster!  I just want to welcome Props, and say that we’re all really excited by his...

Hello ‘Verse!  Erris here.  This week’s Fiction piece, Cat’s Cradle, is by our newest writer here at The Relay, PropMaster!  I just want to welcome Props, and say that we’re all really excited by his work, and can’t wait to see what he turns out next!

The crack on the canopy of Jack’s Aurora CL, Cat’s Cradle, spread halfway down the length of the cockpit as he re-checked the seals on his flight suit and helmet. Another asteroid filled his view, blocking out the stars, and as his ship shrieked collision warnings and red lights covered the HUD, Jack grabbed onto the manual ejection lever below his seat and pulled hard.

Jack wasn’t startled by how quiet it became after the initial rush of decompression. The thud of the exploding canopy seal and the roar of the ejection seat bled away rapidly in a rush of hissing atmosphere, and then sound was gone: reduced to a rumbling vibration shaking his bones and rattling his very being. The disorientation he experienced as he watched his ship fall away was brief—a result of his years of low and no-gravity work—and gone the instant he turned his head away, unwilling to watch the Cat’s Cradle impact the mid-sized asteroid and explode violently ‘below’ him. He turned his attention to maneuvering the ejection seat beneath him, avoiding a collision with the bulk of the asteroid that had just claimed his ship. The emergency thruster built into the seat petered out after a final shuddering burst.

Jack wasn’t startled by how still everything became as the thruster let out a final burp of energy, dampening his inertia and slowing him down to a near-halt. The asteroids had seemed to be moving so quickly after his engines had malfunctioned and sent him careening into the field. His routine scanning trip had become anything but, unfortunately, and Jack took a moment as he unharnessed himself from the confines of the ejection seat to mutter, “Fuck you, Benny, I never should have bought those used engine parts.”

His voice sounded loud in the oppressive silence, and Jack allowed himself to float freely for a moment as he finally looked down to the asteroid and the remains of his ship. The Cat’s Cradle was a veritable pancake against the face of the asteroid; shattered bits of metal and sparking electronics filled an expanding bubble around the crash site. Jack exhaled slowly, trying to keep the visor from fogging as hot tears welled in his eyes. “Damn you, Benny. You killed her…”

Blinking away his blurred vision, he reached out and grabbed hold of the ejection seat, sending his floating form into a slow spin. He watched over his shoulder carefully as his back spun to face the crash site, and at the right moment he pushed the seat away. The push wasn’t much, but it was enough to send him slowly floating towards the remains of his ship.

It took an eternal twenty minutes of slow floating to arrive at the crash, and another seventy to search reverently through the remains of his beloved ship. The STAR ALERT system was shot, broken and dead, with no hope of revival. It felt wrong to wring through her guts for spare parts, like some damned scavenger picking the bones of a corpse clean, but he knew she wouldn’t mind. He’d come to rely on Cat’s Cradle for survival a dozen times before, and she’d be pleased if her final act was one that could keep him alive to see another day.

Jack wasn’t startled after another fifty minutes of searching to discover nothing salvageable of his beloved ship’s parts, except his old service pistol and the registration, insurance, and title card for the Cat’s Cradle.

What startled Jack was how little he felt as he realized he was dead.

He tucked his gun into a side pouch on his flight suit and clutched the title card to his chest as the HUD in his helmet warned him of his dwindling oxygen supply.

The proudest day of his life had been when he’d paid off Cat. She’d been a dream come true; a chance to get off the ground, away from his dirty hab, and into space. A chance for freedom and expanding horizons, a new start beyond every jump point, with a new job and a new bit of cargo to haul. Small deliveries, exploration, a bit of action running hot goods once… he’d even seen a Vanduul Scythe! Jack had run like hell, of course, but he’d seen the bastard, flying between two hulking, abandoned hulls as Cat had been scanning for hazardous materials.

Jack thought of Benny, and the jobs he’d done for him… the plans they’d made, the drinks they’d shared. They were going to be partners. He and Benny were going to buy a Starfarer! Not to replace Cat—never!—but Benny would fly it and they’d split the profits of transporting fuel around the system, sixty-forty…

One more job. A few more credits. Jack had bought those crummy parts at Benny’s behest to save a bit, maybe enough after he’d found some profitable asteroids to put the down payment on the Starfarer…

His visor was fogging. Breathing was getting harder.

Jack ran his hand along Cat’s shattered hull, admiring the scarred and pitted metal. She’d had character. The Cat’s Cradle could be temperamental at times, but she was reliable. His rock. His home. He’d used her sleeping berth more times than an actual bed in a hab over the last five years…

She’d been a fine ship. He was just sorry that, in the end, he’d been the one to let her down.

The grip of his pistol felt different, harder to hold than he’d remembered, but that was all right. Suffocation had never appealed to him, and in the end, he wanted things to be over quick, just like it’d been for Cat.

The scarlet hull and white wings ascending from the black beyond the asteroid cluster were more startling to Jack than anything that had happened to him all day. The comms in his helmet buzzed with static as search lights pierced the shadows of the debris field left by Cat’s Cradle as the large ship maneuvered closer and closer to his position.

It was only then that he dimly remembered Benny pushing him to shell out a few extra credits for a flight suit with a built-in emergency transponder.

The voice in his helmet—younger than his, perhaps—seemed distant, despite the fact that the comm’s speaker was right next to his ear. “Beacon is emitting from this location… yep, there it is. One crash, and one survivor. Hey there, buddy! Need a lift?”

Jack tried to catch his breath to reply, but speaking was too hard, and he was so tired…

Jack found himself lying on a hard, flat bed in the interior bay of some ship. A concerned, feminine face peered down at him through a halo of red hair, brown eyes darting between him and the readouts of some type of scanning device. Jack tried to sit up, but found that it was too hard. “Where…?”

“You’re aboard Any Port, a Cutlass Red. What’s your name?”

“Yeah,” Jack said, his hands at his sides curling into tight fists. He looked down at his balled fingers, remembering the texture of the pistol grip against his palm. He didn’t see his gun anywhere. He was okay with that, though. What he suddenly worried about was his title card.

“Miss!” he managed to yell, his voice cracking with the effort.

She was there again, leaning over him. Jack noticed the scar over her left brow, focusing on it instead of her piercing eyes. “What?” she asked.

She smiled, reached up to the front pocket of her black flight suit and revealed his tattered title card. “Right here.”

Jack reached a hand up for it, tears streaking down his face unbidden, and she placed it between his shaking fingers. He clutched it to his chest like a child with a beloved blanket. He’d been given a second chance, and so had Cat.

The woman smirked, patting his shoulder. “You just rest, buddy. We’re going to jump you back to Darsis Station and get you some proper treatment.”

She was already walking away when he heard her voice across the bay.

Jack smiled, not startled in the least. “Of course.”