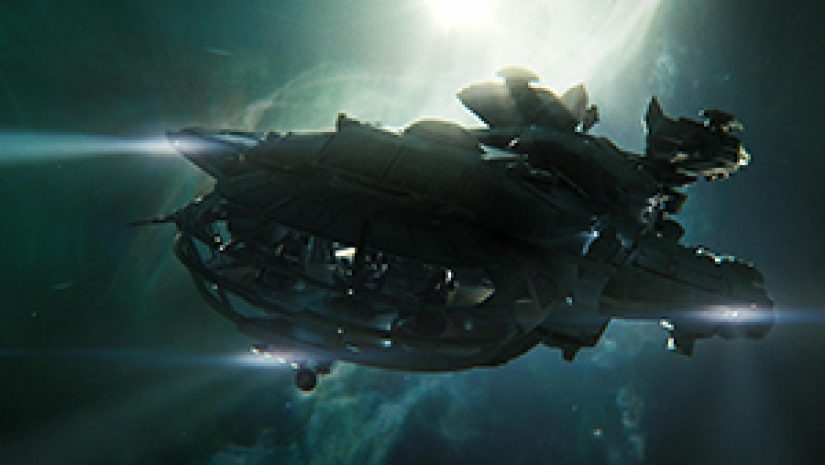 Those Who Came Before, Part 1 Written Wednesday 9th of December 2015 at 12:28pm by StormyWinters

Hey The Relayers, first in a two part series. This will be the first story put out featuring one of our Indiegogo supporters who donated to be included in our fiction. Big thank you to Flynt for supporting our campaign and I hope you enjoy your little piece of the Verse.

What immediately goes through one’s head when you see a perfectly good ship just sitting there in space? Powered down to emergency power only, not one scratch on her, all but gift wrapped like a present at Christmas. If one was a seasoned veteran, you would feel wary. A rookie, overjoyed.

Such thoughts were running through Flynt’s head as he surveyed the lone Aquila sitting quietly in the shadow of the asteroid belt, just outside the perimeter of danger. “Thoughts, gentlemen?”

“I don’t like it, Captain.” Lim answered followed by two more murmured assents from their fellow crewmates. “Everything about it is too perfect. She’s just far enough outside the danger zone, there’s no visible damage on her…”

All valid points he had already considered. Risk vs reward…..the question was how much was he willing to risk. He turned around to face his crew,  “All right, we’ll put it to a vote. Who wants to chance it?”

All three looked between each other momentarily before two hands slowly went up. Lim was the only one who hadn’t. Flynt waited for a few more moments before Lim sighed deeply and put his hand up with the rest of them. “Good. Mr. Jones, would you be so kind as to collar us an Aquila please.”

The Caterpillar rumbled to life sliding through space toward the Aquila, all crew member’s heads on swivels, checking instruments and scanning for possible unfriendlies or movement. Flynt kept his eyes trained outside, studying the dark horizons beyond for anything to indicate a trap.

“Let’s take a slow fly by as we approach,” Flynt said as the two ships drew nearer to each other, “I want to ensure she’s structurally sound before we open that hatch. Lights please.”

The exterior spotlights flared to life and bathed the Aquila in an almost blinding glow, the metallic finish sparked brightly. No breeches, broken components or even so much as a noticeable dent. This Aquila could almost have just rolled off the line.

“Establish docking collar,” Flynt ordered, his eyes staying on the Aquila as the Caterpillar slowed and moved into position. “Once hard lock is acquired, I want everyone armed. We’re going to take all precautions on this one.”

Leaving his men to finish the docking Flynt ducked out and traversed the ship to the weapons locker. Placing his hand on the scanner, it momentarily blinked before he heard the lock disengage and he pulled the door open. Rows of munitions and weapons of all sizes were neatly arranged along the inside.

Tucking loaded magazines into his pockets, Flynt took down four Gemini LH-86’s before closing the locker. Jones, Lim and Hansen were waiting for him at the hatch leading to the Aquila. Handing out the guns and clips, they all took a moment to slap a magazine in and chamber a round before engaging the docking collar door on their side.

All four filed through and waited for Lim to set to work on the Aquila door. To everyone’s surprise it opened unchallenged. “Weapons up.”

The air that assailed them was cool and stale, almost like it hadn’t been recycled in a week. Handheld lights flicked on to chase away the shadows, lighting the immediate vicinity. “Jones, Hansen, we need to restore power and get some lights up and running.”

As the two moved off Flynt and Lim starting sweeping the immediate area out, trying to ascertain whether they were alone or not. “Do you think they’ll get power back, Captain?”

“I really don’t know, here’s hoping.” Flynt answered studying all the recesses where someone could conceivable hide. Minutes passed before the lights started flicking back on and the air started circulating again. Lim and Flynt exchanged satisfied looks just as their comms crackled to life.

“Captain, you might want to get up to the cockpit and see this.”

Flynt pocketed his light and they both started advancing in the direction that Jones and Hansen had gone earlier. Stepping into the cockpit Flynt could see both men standing together looking down on something he couldn’t see yet. Lowering his weapon, he approached slowly and was brought up short as his eyes settled on what the other men were studying. “Well, what the hell…..”