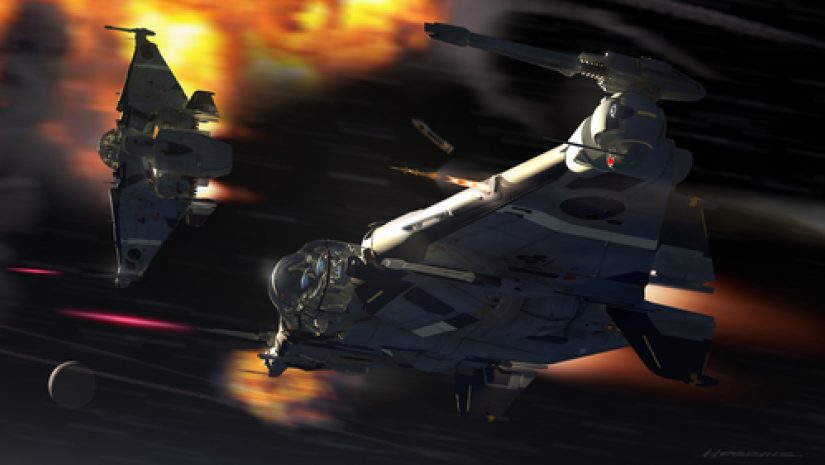 Bootstraps Written Wednesday 24th of February 2016 at 10:27am by StormyWinters

Dad had always held a lot of old ideas close. Ideas about how the world worked, how things should be done, and how a man should hold himself. He had a saying for everything, it felt like. Growing up, dad was always ready to correct me when I failed, or help me be better. I’d been trying to design a MobiGlass application, trying to find something new and exciting, and he’d been proud to see my innovative ideas, but he knew how afraid of failure I was. He’d told me, “Nothing ventured, nothing gained.”

I’d taken those words to heart, because he was right. If I allowed fear to rule my thinking, my ideas would never even have a chance to fail or succeed. My first successful application for tracking UEE vessels based on local communication grid traffic had been a huge success, but in the wrong way. Pirates and illegal merchants bought my program, paying out huge sums to equip their people with the application that helped them dodge the UEE. I’d been branded a cyber-terrorist at the tender age of 18. My father had laughed, his pride unwavering, and had said, “You live and you learn, son.”

We’d had to go into hiding after that. We spent two years dodging the UEE, fleeing deeper and deeper into lawless space. Dad left everything behind to keep me safe. We used the profits from the application to stay one step ahead of the authorities hunting me. I asked my dad, after a particularly harrowing escape from a random patrol, why we kept running. Why he didn’t take me to the authorities and let me account for myself. Explain that I never meant for my program to be used by pirates. He’d smirked, and told me, “To err is a human thing. Forgiveness is divine. But persisting? That, son, is devilish.”

His attitudes rubbed off on me. I grew to be anti-establishment, to resent the UEE for branding me a terrorist without investigating the facts. We finally ran beyond the reach of the UEE, a little after I turned twenty-one. Along the way, I’d kept expanding my abilities. I continued to venture, to gain, to live and learn. I wrote more programs for the MobiGlass and other things. I made sensor spoofers, created hacks for enterprising men and women looking to get an edge over the oppressive regime of the UEE. The UEE had called me a cyber-terrorist, and I embraced their label. I cracked into corporate data, sold information, trafficked in numbers and bits and bytes that were more expensive than the products they sold on their store shelves. I tried again and again to damage the UEE, like a tiny interceptor attacking a great battlecruiser. I scored a few hits, opened a few wounds, and eventually I drew too much attention

I’d been out to get some components to repair one of our generators when the call came over my MobiGlass. “Son, they found us.”

I panicked, nearly crying out as I heard the sound of gunfire, a heavy weapon blowing the lock off the door to our little flat. “What do I do, dad?”

My father laughed, and said, “Pick yourself up by your bootstraps. This life isn’t what I wanted for you, and this end isn’t what you deserve… so you make something of yourself. Bootstraps, son. When you lose everything, you just pick yourself up and start again.”

The line cut abruptly as the signal was lost amidst a deafening hail of gunfire. I’d run for the spaceport, gotten to our private hangar, and taken our little Reliant out, flying away from everything as I left my father and my past behind

The security station hung in the black before me, empty of ships and desolate, a forgotten post of the UEE abandoned in favor of friendlier skies. I had spent most of my credits gathering information on this ghost station’s location and finding whether it was still connected to the UEE military network. Some rumors said it was disconnected, cut off before the UEE abandoned it. Others said the UEE had fled it in haste, leaving only the automated systems running. If there was even a small chance the system was still connected, though, I had a chance to fulfill my father’s dying wish: a chance to start again.

I cut the main engines on my approach, allowing momentum to bring me in over one of the landing pads. I used careful bursts of my maneuvering thrusters to set my Reliant down on the empty pad, a soft thud announcing my landing struts’ connection with the deck. I hopped out of my ship immediately, running down the opening rear hatch and pulling my pistol as I moved. My flight suit’s boots connected with the decking and clung magnetically, and I ran across the pad to the nearest access hatch. I pulled out a door cracking device and set it to work on the door’s lock. It had it open within minutes, and I slid the hatch open and moved inside to the airlock. The airlock did not cycle, which was unsurprising. I moved to the interior door and set the door cracker up again, the machine humming as it processed dozens of different combinations of signals a second, pouring over UEE combination sets I’d bought from an information broker a week before. I watched the pads from a porthole, my heavy breaths fogging my visor as I fought nervousness.

Finally, the machine beeped, and the interior hatch swung open hesitantly, the hydraulic hinge unsteady from disrepair. I gave it a hard kick with my boot, pushing it the rest of the way open, and stepped into the abandoned foyer of the station. Dust particles floated freely in the air, suspended in zero gravity, only disturbed by my passing as I moved deeper into the station. I examined the floor and other nearby doors for signs of entry. Finding nothing that indicated previous access, I searched the walls looking for anything that would point the way to a control hub or computer access point. After a moment, I spotted what I was looking for: a generic image of a computer and an arrow indicating which hallway to take. I slipped through the desolate station, my pistol at the ready, sweat stinging my eyes and causing me to pause and get myself under control. There had been no signs of any security systems or alarms that I had inadvertently tripped, but I couldn’t escape the nagging feeling of unease that clung in the forefront of my mind. I took a deep breath and exhaled slowly, trying to calm down.

I moved once more, following the arrows that pointed me toward the computer hub, arriving within a few quiet moments. This door was conspicuously unlocked, but unpowered, and I had to force it open with a small pry bar. Inside was a bank of dead monitors and empty screens, with stacks of towers toward the back of the room. I entered the computer hub and closed the door behind me, sitting down at one of the consoles. I pulled a small portable power generator from the pack on my back and set it up, hooking it into the nearby towers’ power cells, and activated it. Indicator lights glowed green across the tower and the monitor lit up. I allowed myself a small smirk of satisfaction as I began accessing the stations network.

I worked for several hours. The station had still been connected to the UEE military network, but had been isolated from the network with a series of firewalls that required some work to bring down. They had fallen though, as I worked my way one step closer to a clean slate. I broke through to the UEE military network using a spoofed user identification and began accessing deeper interior networks, hunting down my case file. Finally, I broke through, accessing all the files they had and all the evidence they had complied to bring me down once they caught me. As I worked I noticed that an additional file had been appended to mine. It took a few minutes of extra work, but I was able to access it. My breath caught in my throat.

I stared at the face of my father.

He was alive. I saw records of his capture and followed chains of custody going from our temporary home planet a month ago to an outlying penal colony a system away. He was being held there while evidence against him was explored and complied. He had yet to be charged with anything other than aiding and abetting a criminal, but they looked to be attempting to pin several of my transgressions on him.

A warning popped up on the screen, informing me that I was being traced, and my connection could be severed at any moment. I knew I had only moments to make a decision. I only had enough time to delete one file, one set of evidence.

As my father’s file and the evidence against him disappeared, I waited with anticipation, hoping that the system would complete my action before I was traced. Just as the file was wiped from the UEE military network, my console erupted in red indicators and warnings. The UEE knew where I was, even though they were powerless to undo what I had done. I logged out of the system with a smile on my face. As I ran for the airlock, I knew I had given back to my father what he had given me: a chance at a new life. I had my life, and though it wasn’t the one my father had wished for me, it was mine. I had pulled myself up by my bootstraps with his help, and it was only fair that I offered him the same chance he had given me.