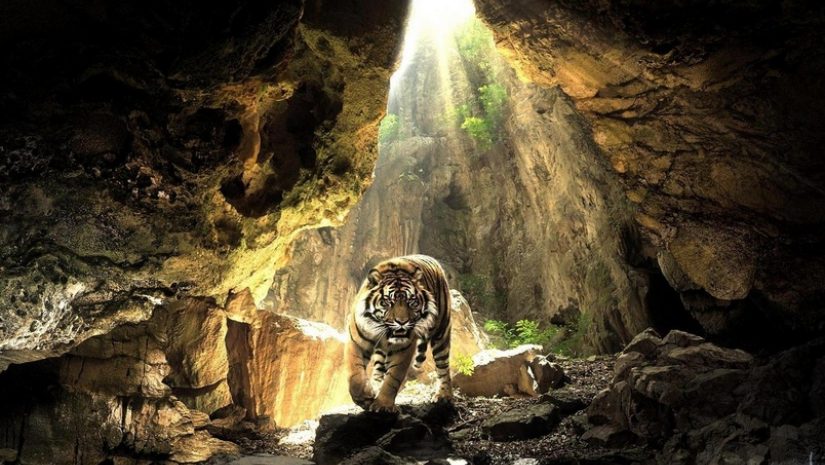 Blood spurted between my fingers as I pressed down on the wound. It wasn’t his only wound, hell it wasn’t even the biggest one. I just went for the one pumping the most blood.

Donny rounded the corner, skidding to a halt just outside the circle of red splatter. Color drained from his face when he saw the two bloody figures sprawled in the dirt. His eyes ticked left and right between them like a metronome. “Lucius, are they…” he swallowed, “are they dead?”

It was a fair question; the Machairodus had done one hell of a job. It didn’t much matter that the oversized sabertooth wasn’t a real living thing, that it was a synthetic construct produced to be the main event on an off-world big-game safari. It seems nobody told the tiger.

“Where the hell is the medic?” I shouted now, frustration bringing out my bad side. A medic was supposed to be on hand with any deployed group.

Donny didn’t speak; he just pointed at the figure under my hands. I blinked, looked down at the name tape on the bloody jacket.  DACOOK.

Oh shit, it was Rob.

My guts rolled over. I’m pretty good under pressure, the guy most people want to have around when the shit hits the fan, but for just a moment I thought I might lose my lunch. Rob’s face was torn half off, the remains of his features were caked in blood and mud and jungle moss where the cat had dragged him away from the campsite. If it weren’t for the red bubbles coming out of his nostrils I’d have taken him for dead to begin with.

“The client,” I muttered, grabbing for alternatives. “The Bureau guy, didn’t his file say something about being a tactical medic on some sorta Fed SWAT team?”

“Yeah,” Donny said with a slow nod, “Agent Mothman. That’s him.” He pointed at the second casualty.

“Oh son of a bitch,” I growled. Mothman was a wreck, worse off than Rob. I’d already cinched my belt around his upper thigh, cutting back on the blood that pumped out where his left leg ended abruptly. A layer of meat had been peeled off his chest exposing several ribs. These two had enough pieces chewed off them that I doubted you could make a whole person out of the leftovers.

A branch snapped off to my left, leaves rustling softly as a huge shape slid through the shadows. My eyes scanned the darkness. Somebody was coming back for leftovers.

I’m a pilot, and a damn fine one. Put me in the sky and I’ll hold my own against asteroids or Vanduul. But down here under triple canopy, standing in a wide slick of blood and human bits, I think my mind was clawing for the ejector seat handle. Given the smell, the flies, the sticky goo, or the boot next to me that still had a foot inside it…

“Look Donny, you gotta go for help.” I could see the panic in his eyes as his mouth gaped open but I waved him to silence. “No time, it’s go or die. These guys are gonna bleed out if we don’t get help.” I didn’t mention the big cyborg cat prowling around with a gullet-full of Mothman and Dacook.

Instead I pointed west. “The Freelancer is that way, maybe a kilometer at the most. There’s an automed in the main hold. Grab it, grab Rostov or anybody at camp and high-tail it back here.”

Donny nodded, his eyes darting around the jungle. I had no doubt about his running away, it was the run back part that worried me. “Donny,” I spoke firmly, “these guys are counting on you.”

I watched as Donny disappeared into the underbrush, wincing with every passing second expecting to hear his screams amid the snap of bones. What I heard was quiet. The next sound was a complete surprise.

My head snapped around. It was Mothman, slurring through broken teeth. He was levered up on one elbow, gritting as he dragged himself against Dacook. His skin was the sallow grey of a long-cold corpse and for a moment I thought I’d side-stepped into a zombie flick where the undead paramedic eats the patient. Instead he picked his own boot out of the mud, the one with his own foot inside, and stripped the laces away. Groaning against his own pain he wrapped them around Dacook’s left arm and pulled. The ad hoc tourniquit bit into flesh but it staunched one of Rob’s lesser leaks.

I stared wordlessly, my only thought that Agents were tough motherfuckers…

Mothman stared at me, his eyes every now and then glancing to the side. “Not far,” he muttered. “Not long.”

I nodded, understanding his point. If the sabertooth came back and caught us all on the ground, we would be easy pickings. If we were gonna survive this, one of us had to stand guard, try to hold it off till the cavalry arrived. I gave Mothman a shrug and repeated his words, “I got this.” I don’t think I had his confidence.

He reached back, pawing blindly at his left leg before he realized half of it wasn’t there. The straps to his thigh rig were torn away. He looked around, then pointed.  I followed his line and saw the small slug gun, still in its holster, laying amid a clump of moss. I scrambled to the weapon, pulled it free and checked the magazine. With a swallow I rose to one knee when a bloody hand grabbed mine.

“Mothman.” He said just the one word.

“Quest,” I replied. “Lucius.”  It was an odd moment. Pilots rarely have much contact with the clients on big hunts, its always the Alpha Dog pro hunters like Rostov that monopolize the social stuff.

Branches moved again, closer now, the sound moving in instead of passing by. I stood to a low crouch, the tangled parts of Mothman and Dacook a bloody pile on the ground.

My eyes narrowed. I needed to pull that monster away from them; even a glancing swipe would likey push either one of them over the edge. I started to back away, side-stepping over a fallen log. What looked like a human ear stuck clotted to the side of the log, it must have been Rob’s.

A deep rumble flowed through the underbrush and I saw the hunch of orange and black shoulders push through the leaves like a furry shark fin. The sonofabitch was big, bigger than I would have imagined. The company advertisement guarantees 400 kilos or better, this beast had to be every bit of 500. The leaves pushed back and the face slid through, glowing amber eyes gazing with laser-like focus over a pair of long ivory fangs.

Screw that it wasn’t alive, that a fuel-cell powerplant drove flexinol muscles and a carbon-fiber frame. It didn’t matter if somebody hacked its animal-simulation brain, or if some slipshod lowest-bidder programmer just botched the code. The lizard-brain in the back of my head saw sabertooth and remembered the lessons of my neanderthal ancestors. I fired five rapid shots and ran like hell.

In my mind I planned to run like a gazelle, to duck and leap and change direction. In reality I flailed like mad, feet stomping like fear-driven pistons as the thudda-thud of heavy footfalls closed behind me. Closed fast. My best-laid plan to brake-and-turn skipped into an ankletwisting tumble as I sprawled into the mud.

Time seemed to slow, to almost stop as I looked up to see the cat hung in the air above me, claws outstretched, mouth gaping as the foot-long fangs came down. A red flower blossomed on the white chest, then another, left and lower, then a third and a fourth before the creature just unraveled amid a horrific blur of hornets whipping through the air. The space above me filled with a crimson mist of fur and synthetic muscle as the whine of the gatling gun finally broke through my haze.  The monster slammed to the ground right next to me, steam rising from the mulch. The amber eyes stared sightlessly as the glow faded away.

I looked to my right where the ATV sat at the edge of the clearing, Rostov standing tall behind the gatling. I’ve never been so happy to see that cigar-chewing grin or that silly-ass Aussie slouch hat. Donny sat in the passenger seat, still wide-eyed but clucthing the automed.  He un-assed the vehicle and trotted past me, steering way clear of the tiger.

Rostov clambored down and walked up with that big-balled swagger of somebody who just mowed down a sabertooth with a gatling gun.  He reached out a hand and hauled me up off the deck, giving me a cursory check before the two of us followed Donny, who was already deploying the automed. Its sensor arms reared up like a snake.

Mothman rolled onto his back and flipped a weak thumbs-up. I nodded back, still breathing hard.

Rostov stood with his arms folded, watching the readouts as the scanner swept the injured. Rob hung at death’s door with Mothman just a few steps behind. Infusers hissed, pushing cocktails of clotting agents, synthetic blood and metabolic accelerators. Slowly, imperceptibly at first, their readouts began to climb up out of the basement.

Rostov grinned one of those teeth-clamped-on-the-cigar grinns and slapped me on the back. “I guess it’s a good day not to die!”