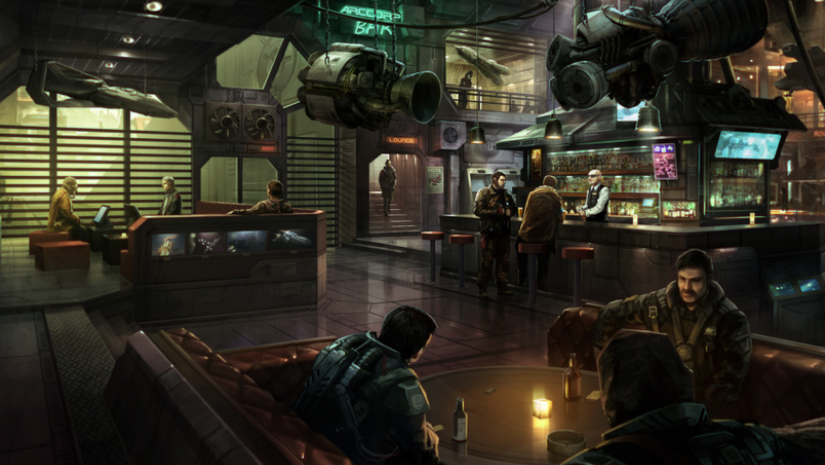 ‘Look. I know there are other people out there that do this, but…’ Wolf trailed off, trying to gauge the reactions of the man sitting in front of him. The bar was dimly lit, and...

‘Look. I know there are other people out there that do this, but…’ Wolf trailed off, trying to gauge the reactions of the man sitting in front of him.

The bar was dimly lit, and almost empty. A performer sat on the stage, perched like a hawk on his rickety bar stool, steel-string guitar in hand. The twang of the strings felt like country, the song even more-so. A song about belonging, about looking for a place to call home.

The more Wolf thought about it, the more fitting it seemed. Home. Belonging. Family, friends, comfort; they were what Wolf was trying to sell. The music just seemed to fit.

Silence from across the table. The man Wolf was talking to, he was a legend. Everyone had heard of him. Wolf himself, he felt… nervous, almost, even just sitting next to him.

The silence was impermeable.

Wolf sipped at his water and watched the rest of the bar as he waited. It was empty, or almost empty, but the few patrons there were were…interesting.

‘Would you like to?’ Wolf asked. He wasn’t paying attention to the man across the table anymore; he’d give up soon. Twenty minutes in, and not a response since the first ‘hello’. Wolf turned his attention to the other patrons.

At the door, a young…man? Boy? Trying to get in. The bouncer wasn’t having it. Wolf had to laugh, inside at least. The kid was insistent, that was for sure. Wouldn’t take no for an answer, even though the bouncer was twice his size. Wolf almost wanted the bouncer to let him in, just on principle.

Wolf certainly would, if he had the chance.

The musician… between sets of hard-strummed guitar, he was cracking jokes, constantly. Bad songs about fortunes and sons, and even worse jokes… Wolf could see why he was playing the bar on a Tuesday.

And still the man across from him said nothing. His mobiGlas was a special model, an early model, Wolf had only seen a few of the like.

There were a few other patrons around, one at the back sipping bourbon and writing, another looking lazily at the sound and light controls for the stage, as if wishing he could go and fix the sound.

‘I would…consider it…’ Without warning, the man across from him spoke. Wolf almost jumped, excitement coursing through his veins.

‘Well, here’s what I propose…’ Wolf started. He had the full speech memorized. Pull out the big guns. Talk about the strategy, about the lack of a true competitor in the ‘Verse. About the skill and value that could be brought. He’d cover the costs, of course. He was the investor, the man across from him the talent. Together, though, together they could be something more-

‘I know that’s not the answer you’re looking for…’ His voice was deep, warm. The kind of voice that made you think of fried eggs and pancakes for breakfast, the way mother made them. Wholesome, friendly…

‘There’s…there’s no rush…’ Wolf reassured. He’d have to take his time. Play the long sell. If he could get this one man on his team…

The man across from him deep in thought again, Wolf’s attention drifted, again. It was a problem. On the large Glas screens in the bar, a news report was flashing. Anna Log saves thousands from the dark’, seemed like a puff piece about a local engineer.

Wolf paid little attention. Important, for sure, but not as important as the meeting in front of him.

He would wait. He’d have to wait.

‘First of all, thank you for the respect you expressed when you contacted me. I get a lot of praise, and it’s humbling.’

Already, more words than Wolf had heard the man speak in a row, and he wasn’t done.

‘I have been thinking for quite some time about something like this. About having a more… permanent place for what I do.’

He continued as Wolf watched the entrance. A man walked in, smiling, laughing with the bouncer, pushing the kid aside, not even noticing as he fell to the ground. The smiling man wore a large trenchcoat. The bouncer let him past.

The man, the new one, skinny, smiling, laughing, he walked up to the musician on the stage, seemed to excuse himself, ask for the guitar. Wolf watched as the musician, obviously confused, handed it over. The smiling man leaned to the mic, started to speak, the first few words garbled.

‘All the people…’ he started. His voice seemed… off. The man across from Wolf was still speaking, but Wolf couldn’t pay attention anymore. ‘There’s no country…’ the smiling man continued, ‘Nothing to kill or die for…’

Wolf shifted in his seat, anticipating.

‘There’s no need, my brotherhood’ said the smiling man, as he tossed the musicians guitar backwards, ignoring it as it snapped in two behind him on the stage.

‘The colours are… You can’t imagine them. The colours.’

The smiling man stepped down from the stage, pulling something from his pocket, and Wolf moved the instant he recognized it.

Two shots to the chest from Wolf’s pistol, and the man dropped, the grenade, pin un-pulled, rolling on the floor.

The chaos after, the yelling of the patrons, Wolf getting tackled by the bouncer… It got sorted out, eventually. The police took statements, told Wolf to stay on planet. He knew the drill. His Reliant lifted off slowly, its engines rotating as he got lift, took off slowly towards the city he was staying in. He’d chosen the Reliant on purpose, chosen the variant on purpose, hoping that his plans would pan out. And they still might. Wolf was distracted, he kept having to remind himself he was flying, remind himself to pay attention.

He’d just killed a man. All eyes were on him. In a week or two, he’d be praised for saving dozens from a madman.

For now, though, he’d be under watch.

Worst of all, in the chaos, the man he’d been meeting with had disappeared.

Wolf, resigned, returned to his hotel, conscious of the police escort unobtrusively following him the entire time. He slid his mobiGlas against the door, unlocking it, and walked through, the lights inside turning on to welcome him.

And then his ‘Glas pinged.

A message. From the man he’d been meeting with.

Your idea, I like the idea. Thanks for being flexible. I had a brainwave, in terms of a name. It’ll come below.

But first, I think this works best with both of us contributing. I don’t want obligations, or deadlines. I do this for the love I have, not for anything else.

I want to do what I want, when I want. That’s important.

If all this meshes with your plans, if you’re okay with that, then…

I had a thought, about a name.

Your home for all things Star Citizen.

I’d love to hear what you think.

Wolf had done it. The team would come together, starting there, starting with Nehkara.