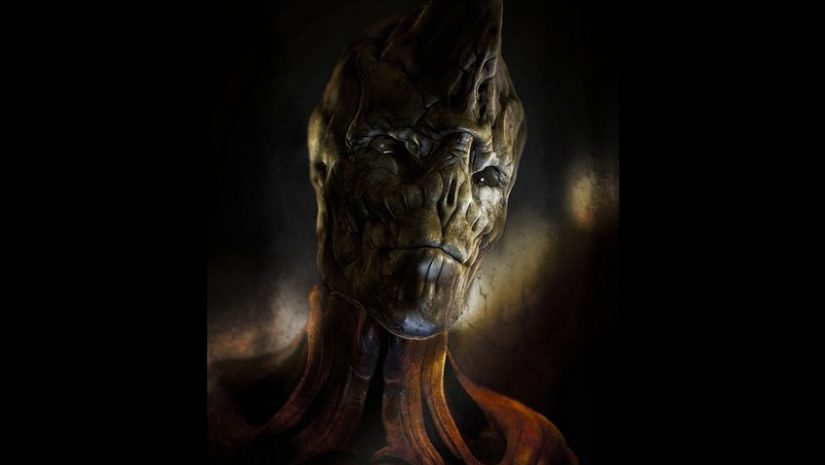 **Editor’s Note: This story involves alien races that we have absolutely no information about.  Literally everything about this story, aside from the race’s name, is speculation and fancy.  Take heed!** Concrete and asphalt surrounded him on...

**Editor’s Note: This story involves alien races that we have absolutely no information about.  Literally everything about this story, aside from the race’s name, is speculation and fancy.  Take heed!**

Concrete and asphalt surrounded him on all sides, and he spat at it.  Every chance he got, he spat.  On buildings, on sidewalks, on streets.  At the heels of passers by.

Krrn hated the city.  It was a conglomerate, a shapeless, artless husk created by the rotting detritus left by human hubris.  Cities; cities were leeches, worms.  Rats.  A mashup, a jumbled amalgamation of all the undesirable animals that infested them.  Life in a city sucked every desirable trait out of every thing it touched.

Krrn hated working with the humans.  They were better than the Vanduul, barely.  Why his Captain was forcing him to leave the Ship, to come to the city for the meeting…

Sometimes Krrn wondered what his Captain was thinking.

‘Krrn,’ the Captain crooned, stroking his crested forehead as she lay, his body curled around hers, in the cocoon.

‘Yes, Captain,’ Krrn replied obediently.  It was his turn with the Captain.  Every Banu took their turn, in time.  It was Krrn’s turn now.

Krrn hated being with the Captain.  The loss of control, the loss of freedom and free will…

‘Krrn, I need you to go to the City tomorrow,’ the Captain muttered, half asleep, skin still slick from arousal.

‘If I must…’ Krrn answered, and even that slight resistance took all the willpower he had left.  Part of him, part of him hidden in the back of his mind screamed out every time he was with the Captain, but…

The Captain, when she was like this, when she was locked in her cocoon, no Banu could resist her.  They took turns, the rest of them, making sure the Captain was satisfied.

Krrn could think of nothing worse than being with her.

‘The humans,’ the Captain continued.  She must not have noticed his…disrespect.  ‘The humans, they refuse to come to the ship,’ she muttered, shaking herself, her lidless eyes staring, sightless, forward.

The Captain was waking again, and Krrn’s inner voice screamed in rebellion.

He was secretly happy.  He was resisting her more.

‘Yes, my Captain,’ was all Krrn managed before she took him again.

Krrn shook himself.  Someday; someday he would resist the Captain.  But not yet, not today.  Today he had to deal with the humans.

The air in the city was too…too clean.  Krrn missed the ship already.  Being outside its comforting halls made his skin crawl.

Deal with the humans, and get back.  Simple.

Finding the humans did not take long. They had a building, an office, not far from the starport where the Ship was docked.  Krrn walked, ignoring the stares of the passers by.  The Banu were known here, they traded frequently, but seeing one walking outside of the Ship…the humans were confused.

He walked through alleys to get to the building more quickly, tight avenues between the buildings, tighter than the broad main avenues.  The alleys felt better, felt more like the corridors of the Ship.  Fifteen minutes, and he was there, walking into the building.  The humans there were ready for him.  A cushioned seat, Mirk to drink.  They were trying to make Krrn feel at home, trying to influence the negotiations.  Trying to be friendly.

Krrn grimaced at them, distasteful of their inadequacy.

They mistook his grimace for a smile.  Humans.

‘Begin,’ Krrn said, one hand sweeping open before him.  He had opened the negotiations.  He would not wait, not banter with the humans.  If he was to do this, he would do it right, and quick.  He needed another chance, needed to get back to the Ship before the Captain’s lust died down.

The negotiations were not swift.  Night was stretching her filmy veil over the city as Krrn emerged, victorious.  Krrn simply did not bend.  The humans had bantered, wheedled, pleaded, and tried to force his hand.  Krnn had stood firm, and now walked out of the building with the contract, a good contract.  Krnn had won this day.

Krrn stopped as two figures slid into the opening of the alley ahead of him.  Humans, with weapons of some sort.

Krnn turned, took a step towards the other end of the alleyway, stopped as three more humans stepped in, also armed.  Five humans, one alley.

As the humans got closer, they started hurling insults.  They always started with insults.

‘Vanduul lover!’ one yelled, waving the knife in his hand back and forth, low, menacing.

One human, the shortest, stood at the back, a pistol in his hand.  ‘We don’t like your kind here, eyeless!’ he said, pointing his companions forward.  The rest had knives and clubs.  Only one was sufficiently armed.

Ten feet away.  ‘You should have stayed on your ship, snake-face!’ the one with the pistol yelled, still standing behind his companions as they approached.  Five feet.  Close enough.

Krrn gave no warning.  Putting one three-toed foot against the alley wall, he pushed, up and forward, pushed himself over the two closest humans to land facing the one with the gun.  He grinned as the human stumbled back, raising his gun.  One hand to the humans neck, squeezing.  The other to its gun, pointing it backwards over his shoulder.  He lifted as he squeezed, feeling the cracks in the humans fragile neck.  The gunshots were loud, three of them, whizzing right past his sound-hole.  He heard one yell of pain behind him as he crushed the short one’s throat, dropping his body to the ground and turning.

He met the coming knife with his left arm, letting it dig deep, feeling it stick as he shot a fist forward, landing a punch square on the left human’s chest.  He felt the humans’ ribs shatter, laughed as it fell to the ground, gasping for air that would not come.

The other, the one on his right, landed a blow against his head, the club hitting him square in the temple.  His right eye went fuzzy as he went down to one knee.  Lunging forward into the right human’s chest, he swept the knife stuck in his left arm forward and down, cutting the tendons in both the humans’ thighs.  It screamed as it dropped to the ground.

Krnn looked up.  One of the remaining humans was lying hunched against the wall, trying to stem the flood of blood pouring from its throat.  One of the bullets got it.  Good.

The last human had turned already, running for the alleys exit.  Krrn grunted, and an underhand throw put the knife low through the humans spine.

Krrn did not take time to survey the carnage.  The ‘authorities’ would arrive soon.  Krrn would be gone before that, would be safe back in the Ship.

The Ship.  He had forgotten.  This detour…Krrn hoped it had not cost him time.  It was still his turn with the Captain, still his turn to try and resist her.

He had won the contract.  He had beaten the humans.

Maybe, maybe today, he would resist the Captain.

Maybe today, maybe today he would supplant her.