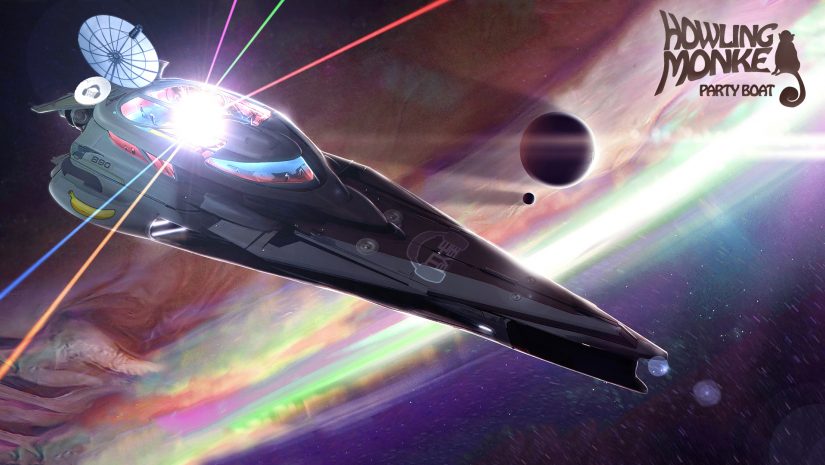 ‘Braaaaaad’ she said, her whine echoing throughout the cockpit of our Reliant like a half-dozen years of regret made solid, ‘We never goooo anywhere fun anymore.’ I flipped channels on the radio, trying to find...

‘Braaaaaad’ she said, her whine echoing throughout the cockpit of our Reliant like a half-dozen years of regret made solid, ‘We never goooo anywhere fun anymore.’

I flipped channels on the radio, trying to find something in the subspace to drown her out with.

Six years we’d been married. How. Why. When would it end. The thoughts cut through my head like the whine of her voice. How could I have been so dumb, so blind.

Sure, she was attractive. Sure, she made all my friends’ wives look ugly by comparison. Sure, the sex was great, but…

‘Braaaaaaaad’ she said again, looking at the ceiling, twirling her hair in her finger aimlessly.

The radio crackled as I found a new channel, a local beacon, streaming in-system only. Finally, something to drown her out hopefully.

‘Ey, do you like having hey good time?’ the stilted accent of a Frenchman came on, the voice somehow sultry, insulting, and alluring, all at once. I lowered my finger from the console, figuring something entertaining would come next.

‘Do you like to partay? Then join us! Private party! Tonight only! Head on down to our 890 Jump, and dance the night away!’ The frenchman on the radio started giving coordinates, but I already knew, I knew that I’d made a mistake.

I immediately regretted my decision not to change the channel.

‘Braaaaaad’ she said, leaning in close, eyes wide, face a smooth sheen of makeup and infantile excitement, ‘I want to daaaaaance, lets gooooooo!’

I looked at her, looked at her bouncing up in her seat, pure childish delight on her face, and I could help myself. A few quick flicks at the console, and the ship changed direction.

The squeal of joy as she hugged me almost made it worth it.

The 890 came into sight slowly. The first signs it was there were the flashes of light from the giant custom spotlights stationed around its hull, sweeping the heavens like very stiff multicoloured octopus arms.

I groaned inwardly. Worst analogy ever.

But it stuck with me somehow, the spotlights windmilling wildly. I’d left the station on as we flew in closer, and an eclectic mix of rock, pop, electro, and some things I wasn’t even sure had names had been playing. Nothing I’d really enjoyed, but she’d been into it the whole way, bobbing up and down in her chair, getting up and dancing as much as she could in the cramped Reliant. She was like a little kid, excited; happy; without a care in the world.

I shook my head and looked back to the console, guiding the Reliant towards one of the custom docking bays at the side of the 890 Jump; a long, protected temporary ramp we could pull up to and dock at, its atmosphere self-contained by various shields and other wizardry I didn’t really care about. It meant that we didn’t have to EVA to the Jump, meant that we didn’t have to get into our suits.

Meant that Anne didn’t have to complain about mussing her hair with a helmet. And that’s really all I cared about.

There were a dozen other ships parked already, mainly 300 series; nice ships, nothing too large, and the docking procedure was simple. A few minutes later, Anne and I were walking down the long ramp towards the Jump’s docking port.

Well, I was walking. Anne would dance and twirl to the music, whirling and spinning a few meters ahead, then bouncing on tiptoes till I caught up.

It made me smile as I put an arm around her slim waist, as we both leaned through the docking port that opened on our arrival.

The music hit me first. Loud. Bass booming. Some EDM was playing, eclectic, fast and loud, something that Anne could jump to. And jump she did. She jumped, twirled, looked back at me, giggled, and then ran further into the 890 Jump, her dress shimmering in the multi-hued interior lighting.

I looked back before continuing into the belly of the Jump, the docking port closing silently as I stepped away from it. Rather, the docking port made noise closing, but the sound of the music inside the ship drowned out all else.

I stood in the ship alone with the music and my thoughts. There were no sections closed off, no locked doors; the whole ship seemed open, open and empty.

The Jump itself was beautiful. The wooden touches created a veneer of class, respectability, tarnished only slightly by the Banu funeral hymn that was now playing over the sound system.

I made my way up to the bridge of the ship. Much of it had been remodeled. The crew quarters and dining area had been refitted, were now the area we’d docked into, with stairs up to the bridge, and down to what I assumed was the dance hall.

As my foot hit the final step of the stairs up to the bridge, the music stopped, all music, all sound, and there was nothing but silence. I stood for a second, confused, waiting for the next song to start, waiting for my brain to process the carnage that my eyes were looking at, waiting for my mind to acknowledge the mass of bodies on the floor, their blank and lifeless eyes staring, scared, their blood pooled around them in dried black oceans.

There were five of them, huddled around the control station, five bodies wearing similar clothing; crew. Or owners. All dead.

One lay slouched in the Captain’s chair, a bearded man, his throat torn out. One had a microphone shoved through his neck.

One, a woman, lay in two pieces, bottom and top halves stretched across the room.

‘ANNE!’ I yelled, turning and taking the steps two at a time back down to the docking area, racing towards the front of the ship, where I’d assumed the dance floor was.

Reaching the top of the stairs and looking down, I was met once more with carnage. Dozens of dead, strewn about the dance floor. And Anne, dangling from the arms of…

‘ANNE!’ I yelled, and the thing turned its head around, grinning, eyes wide.

‘Monkeybot good’ it said, dropping Anne to the floor, her body collapsing, limp. ‘Monkeybot bring many listeners for Ricko’ it said, jumping towards me.

‘Rellim be happy! Not call me bad Monkeybot anymore’ it said as it landed at the foot of the stairs. I heard the strain and whir of mechanical muscles move as I turned to run, and the mechanical ape landed in front of me, atop the stairs.

‘Monkeybot good, Monkeybot bring The Base many listeners. Ricko and Rogue and Rellim and Zhane and Tso be happy with Monkeybot’ it said as it grabbed my throat, lifting me to its eye level as its grip tightened.

As the world around me faded to black, I heard it say ‘You listen to The Base now?’

Anne sighed, wringing her hands and apologizing. She’d been excited, so excited, for the trip. So excited to go outside, to live again, feel again. Brad had been such a problem, but he’d promised, promised that this time, this time…

‘I’m so so sorry, Mr. Ricko,’ she said, crying as she watched Zhane restrain Brad, holding him from behind in a choke hold as Rellim struggled to hold his arms from flailing. ‘I… I thought he’d stopped taking Psilo, thought he’d gotten clean, stopped taking the drug, I’m… I’m sorry, so so sorry. He ruined your party and and…’ She couldn’t help it, burying her face in her hands as the Base’s staff wrestled her husband to the back of the ship.’

‘It’s okay ma’am,’ Ricko said, laying a comforting hand on her shoulder. ‘We’ll lock him in the cargo hold till he calms down. You should go back to the dance floor, have fun. Forget about him. And possibly, possibly consider a divorce. You’re better than him.’