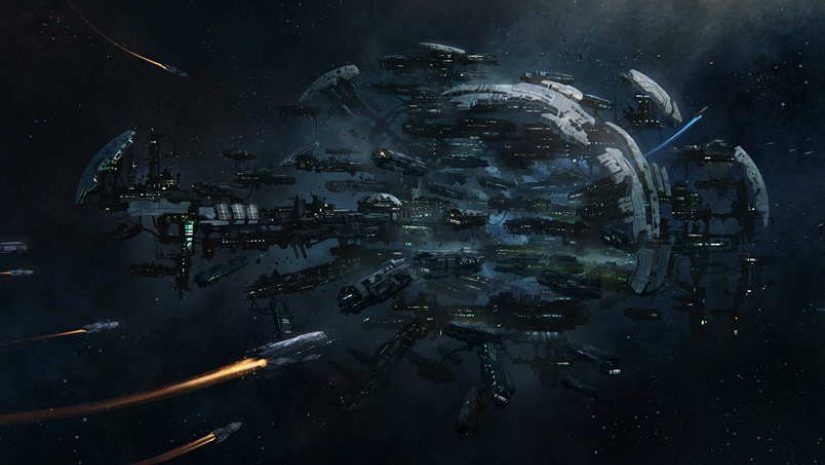 Hey The Relayers, welcome back to another installment of Angel. Thanks for joining Leo, Jarrett and the Angel as they continue on their exciting journey….

For the uninitiated, read these first:  Angel I and Angel II

I wake with a headache, it’s been my constant companion for the last two weeks. A low drone of voices is aft of where I lay, motionless. As my head clears slowly from deep sleep, I’m brought back to the present. Oh yeah, we’re enroute to a new destination, passenger in tow. My eyes slide shut once more and I’m reliving the source of the incessant pounding in my skull.

After regaining consciousness I found myself still strapped into my jumpseat, the Angel flying herself in the direction we had been heading, my shoulders sore from slumping against my harness. Boots, too loud, beating an echoing staccato as they come forward from the aft section.

“Leo?” Jarrett’s voice brings my head around. The concern on his face is evident, “Shit, I thought you were dead. You weren’t answering me.”

My arm, which almost feels disconnected from my body, reaches up and gingerly touches the spot on the side of my head where a nice hard lump has formed underneath a free flowing gash. My fingers come away warm and wet. I stare at the red liquid covering them, rubbing my fingers together, feeling them slide away from each other.

“What the hell happened?” my tone sounds slightly confused even to my own ears.

My harness buckles fall away as Jarrett frees me, pulling me to my feet and aft, depositing me in one of the console chairs. I return to studying my now sticky fingers, listening to Jarrett banging around doing who knows what. It isn’t until I feel him press something against my head, ignoring the loud hiss that emits from between my teeth, do I understand he was searching out our emergency kit.

The sting of the antiseptic seems to have shocked me out of my dopey state. Clarity comes rushing back in pieces, Cutlass, dogfight, debris field, incoming missile. My hand grabs Jarrett’s wrist applying enough pressure he winces, “What the hell happened?”

I apply more pressure until he emits an ow, “Straight forward answers.”

“All right, all right,” he replies shaking my hand off his arm. “He was fast, I was faster. I intercepted his missile just before impact.”

My mind races back to the way the Angel veered sideways with no warning. “How close?”

I can see he’s squirming now. I level a dark look in his direction, waiting for him to crack. He does. “There might be some heat damage… but on the bright side we’re still in one piece.”

We arrive on time and deliver our payload, Jarrett shaking the hands, accepting the payment. The concussion I had received plays havoc with my system for a few days rendering me less useful than usual. We linger planetside for a couple extra days, and as much as I hate shelling out for the docking fees, the Angel and myself need some recoup time.

She survived with some minor impact and heat damage. We were lucky. It could easily have gone the other way. Plans are made to depart for Spider within a few days and as much as the thought of encountering more pirates gives me pause, our hull damage could be repaired and new ordnance purchased at lesser cost there.

I’m doing my preflight check when Jarrett comes sauntering up with our supplies and a stranger in tow. I give Jarrett a questioning look as I study the newcomer. His clothes are clean but well worn, shaven and neatly cut hair. All he carries is a small bag which probably holds all his worldly possessions. Certainly doesn’t seem like much of a threat.

I wait for Jarrett to make some introductions but as teenagers are wont to do, he ignores me. I extend my hand to the stranger, “Leo, and you are?”

“Trae, Erric Trae,” he answers shaking my hand firmly. “Jarrett tells me you are willing to take on passengers.”

“Did he also happen to mention that we are heading to Spider? Not exactly the type of place a common traveler seeks out voluntarily.”

“I’m from the Church of the Journey.”

I turn and level a questioning look at Jarrett who merely gives me a shrug and goes back to loading the supplies. “A Journeyman, that explains it then. If you’re willing to risk the trip we can allow you to tag along.”

I step back and let him pass, I feel about the same about religious orders as I do for government archetypes. I just don’t understand the logic behind sending people out into the unknown to gain knowledge through experience, with little regard for safety.

I open my eyes slowly once again. My mind is brought back to the present, the headache doesn’t seem so bad now. I listen to the low conversation going on, catching the odd word here and there. Erric Trae’s voice is decidedly soothing, his smooth baritone reminds me of a good whiskey, pleasurable to take in.

My thoughts wander thinking of our current passenger. Wouldn’t anyone be considered a Journeyman who travels through space? Jarrett and I have hit up enough ports on so many different worlds that we could probably qualify to become honorary Journeymen.

Jarrett interrupts my wanderings, “We’re coming up on the jump point.”

I push myself into a sitting position, wait for my head to orient itself before attempting to stand. Success, first try this time too. I take my usual position in the pilot’s seat, Jarrett sliding in beside me. “Hope like hell there’s no one waiting for us on the other side.”

I voice this concern mostly so everyone’s aware of the danger we might face once through the jump point. I sigh loudly, we survived the last run in with pirates, I’m not sure I can handle a second time. I do a last check, everyone’s strapped in. Engaging the jump engines, I feel that momentary flip of my stomach as we enter the jump point.

I squint my eyes against the brightness of the passage, counting the seconds until re-entry into normal space. Angel pops out the other side dropping us back into the blackness of space. To my relief we’re not immediately blown out of the sky. A quiet sigh escapes me as I check the immediate area for any sign of another ship. Nothing. Luck is with us today.

I can barely make out the tiny speck on the horizon. I urge the Angel in that direction, eyes constantly scanning for a surprise attack. I don’t see another ship until we’re in visual range of the Spider itself. “Jarrett, signal the tower four times for an approach vector. Four times only, you understand?”

Erric stands over my shoulder studying the monstrosity that makes up Spider. Large cables tether each of the derelicts together into a makeshift habitat, the breadth and width qualifying it as a planetoid in it’s own right. “Impressive, isn’t it?”

“Indeed,” he answers, a tiny hint of awe tinging the one word. “Have you been here before?”

“Once.” I answer after a moment of indecision. It’s been 12 years since I last set foot on the Spider and I definitely wasn’t in much of a rush to get back here. Angel closes in on the floating city, “Jarrett, we have permission to dock?”

As if on cue, the codes come through, visual only but they pop up on my screen, indicating our place of final landing. I guide her between two giants at rest, their metallic sheen long worn off, signs of a hard life. The tethers strain to keep the different modules connected, some have succumbed to the neglect that plagues Spider.

The place is as busy as a hive though, ships pass us as they’re leaving and many more are docking just like we are. I approach our designated docking area switching on the EDL assist once we’re within sight of our final landing spot.

As always she brings us in gently, coming to a complete stop just inside the bay doors. I hear an almost inaudible sigh escape Erric before he speaks, “Just like that, huh?”

Jarrett and I secure what we need to and do our final shutdown of the engines. Erric is waiting for us at the top of the stairs, ready to descend. He extends his hand dropping his payment into my open palm, “Thank you for passage. I really appreciate it.”

I think better about mentioning that I’m glad we got him here at all. As I watch his back descend down the stairs, I can’t help but think, ‘I hope he doesn’t get killed in some dark corridor…. He seems like such a nice guy.’