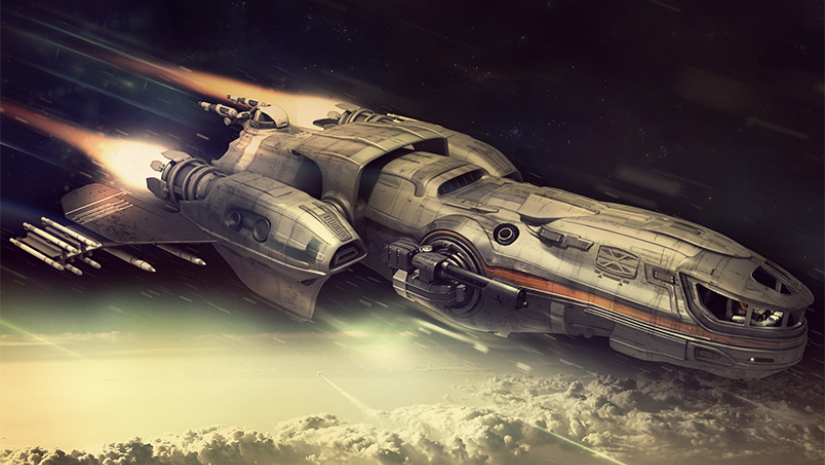 Hey The Relayers, this is my first official post as part of The Relay team and I’m really excited to share Angel part II with you and hope you enjoy it. If you haven’t already...

Hey The Relayers, this is my first official post as part of The Relay team and I’m really excited to share Angel part II with you and hope you enjoy it. If you haven’t already read Angel part I, I strongly urge you to start there as this is a continuation.

The last crate had been loaded an hour ago and we had received the necessary clearance to depart Cestulus. “Jarrett, secure those crates and we’ll be on our way.”

He trots up the rear ramp as I walk around, making a quick inspection of the Angel’s exterior. Satisfied, I climb the stairs that extend out from her underbelly. Meeting Jarrett as he comes up from the rear cargo area, a brief nod indicates everything is ready.

I slide into my seat, Jarrett into his a moment later. I feel Angel coming to life as he initiates the engines, her power traveling up my arms as I grip the controls. She vibrates momentarily as we lift off, the backwash of energy lessening as we leave the solid ground behind.

Looping around, we retrace our flight path back over Jata. We break atmo and are enfolded back into the calm sea of blackness. I see the waystation directly ahead, obtusely hanging there as if in warning to those who would run.

“Angel’s Vengeance on approach for departure scan.” Jarrett transmits as we creep up slowly into a parallel position to the station.

I send the codes, moments later the station’s scan encompasses the Angel’s aft section, blanketing half her body before disappearing just as quick. “Codes accepted, you may proceed. Thank you for your cooperation.”

We clear the station, the Angel swallowed up once more by the emptiness of space. I plot a course to a nearby jump point and give her a few minutes to get well clear of the station, before engaging the Quantum Drive. After the sickening sensation of accelerating to Q-Drive speed passes, I secure the controls and slip out of the pilot’s seat to stretch my legs.

A half hour later I can feel the Angel dropping out of Q-Drive and I slip back into the pilot’s seat, double-checking our position and heading against the local star map to confirm we are in the right location. Everything seems in order to begin the jump, “Strap in.”

My jaw tightens at the thought of a jump, the only thing about space travel that truly makes me nervous… every time. There are too many unknown variables, too many things that could go wrong. One quickly learned to respect jump point passages.

I shut my eyes for a moment, feeling the vibrations through my feet as the Angel spools up her Leaper engine. Opening my eyes just as the Angel initiates, I always feel like everything narrows to a fine point, the ship liquefying and sliding into an impossibly small entry mark. Once through that mark everything reforms into the right size, exploding outwards to fill the narrow passage, and we shoot down at incredible speed. Light chases us, strobing past us like it’s in a constant loop – behind, then ahead, and behind again. She feels heavy, I struggle to control Angel as she weaves through the winding tunnel of light between stars and strain against the maelstrom of forces that buffet her.

The entire jump takes only a few minutes before the Angel once again breaks out into normal space, but every jump feels like an eternity. My eyes continue to strobe against the darkness of space outside, residual after effects of the all-too-bright epicenter of the jump passage.

What greets me when my eyes finally focus on the area ahead of us makes me slow the Angel to a complete stop.

One word, uttered under Jarrett’s breath, sums up the situation. Just clear of the jump point exit writhes a sea of twisted metal. A graveyard, where the remains of many unfortunate ships and the souls onboard met their untimely demise. “What happened?”

“I can only assume they exited too early and weren’t so lucky.” I reply surveying the miles of carnage obstructing our path. I sigh deeply – the non-static nature of the debris field is going to make navigation difficult. Momentum from incoming out of control ships has set everything in motion, one ship crashing into another and so on until the field has expanded to not only be wide but deep as well.

“Can we plot a jump back?” Jarrett asks tentatively.

I immediately shake my head, “No, our destination is forward. It would be an unnecessary delay if we had to go back.”

“Then, how exactly did you want to do this?”

I watch the debris field as the ships collide and wheel away, smaller pieces falling off upon impact, laying a thicker blanket of obstacles. I feel the hairs on the back of my neck stand at attention… something about this place doesn’t feel right, and it has nothing to do with the sea of derelicts in front of me.

“I want you in the rear turret,” I say turning to face him, “If something gets too close as I move through I want you to blast it clear.”

Jarrett jumps out of his seat, his boots ringing on the metal decking, but the sound grows fainter as he descends deeper into the bowels of our ship. I urge the Angel ahead slowly, giving Jarrett time to get situated.

Spotting an area with less congestion, I angle towards it. As we enter the field, a mangled Hull C drifts uncomfortable close. “Jarrett, the hauler.”

The intervening moment seems long before I hear the telltale whine of the twin Behring V82s building up power before they discharge, streaking across the space between us and the debris field. Jarrett’s shot is accurate, a portion of the belly of the ship blows away as the momentum carries the hulk backwards, sweeping smaller bits of detritus away with what remains of the skeleton of the ship. The Angel slides underneath, avoiding the larger chunks, but I hear small particles impact and bounce off her body as we navigate further into the field.

“Impact, starboard wing,” a computer voice chirps from my panel. I reach over, disabling the audio. She’s going to be receiving countless hits and I don’t need the distraction of her cataloguing every one.

Minutes… hours pass, I’m not sure which. Sweat breaks out on my forehead as my intense concentration takes a toll. We inch through the maze, Jarrett clearing a path when needed as I maneuver her wings and body over, under, and around bigger obstacles. I grit my teeth every time I hear an impact, ‘Damn, damn, damn!’.

As we reach the outer edge of the field, the distance between wrecks is more considerable, allowing me to release my death grip on the controls.  My fingers ache from the pressure I’ve put on them. I breathe out what feels like a pent up breath, trying to let go of some of the tension.

We swing around what’s left of an Avenger, its once triangular body reduced to pulverized metal. “This is no way to die.”

Jarrett’s voice sounds tenuous, like he’s fighting some inner emotion, controlling to keep it where it is. I aim to keep it light, “Wouldn’t be my first choice.”

A Cutlass looms ahead, hanging like it’s on strings.The hairs on the back of my neck stand up again. She’s rotating slowly and I take in her breadth as I study her hull, “Jarrett, what’s your impression of that Cutlass?”

“Pristine.” We both say at the same time. Compared to the other heaps of scrap we’ve seen, she is almost untouched. Her hull and wings are intact and marred only by minor cosmetic damage. This ship shouldn’t be here.

The Angel pulls abreast of her within several hundred meters. As we slide into a parallel spot a flash of orange perforates my vision. Instant recognition kicks into my brain, “Fuck.”

I throttle up the engines, the responding power surging into my hands, “Fucking pirates.”

Just before she passes out of my peripheral vision I see her go hot, engines and lights come on bringing her back to life. My concentration is once again on my HUD. The radar is packed with contacts… corpses of dozens of ships with enough residual heat and EM to make it hell on Angel’s computer systems. I ignore the radar, focusing my eyes forward, doing my best to weave through the three-dimensional maze of rapidly approaching debris. I hear the V82 firing, a constant staccato of shots, some ours and I assume some theirs.

The Angel and Cutlass trade shots back and forth, mostly misses as we play cat-and-mouse amongst the wreckage, weaving in and out. I initiate the Kronegs, hoping to help Jarrett out with his frenzied attack. A bottleneck forces both our ships closer for an instant, a ship cockpit dead in our path, I barrel roll the Angel exposing her vulnerable belly as we go under the roadblock. A shimmy goes through her body as I pull her back into an upright position, “What the fuck was that?”

The chase ensues once again. I don’t feel a difference in her performance as we whip in, around, up and down, I pray that it’s minor as my HUD flashes a yellow warning at me indicating the ventral aspect of the ship. We’re coming to the edge of the debris field. I feel relief and trepidation all at the same time -once out it’ll be easier to maneuver but we lose the only protection we have.

“Leo, it won’t work in here.” Jarrett yells back the obvious.

I turn on the guidance system for the missiles, and as expected it protests loudly – too many targets acquired. If I can get a lock before the Cutlass does when we clear the perimeter, we’ll maybe have a chance. The Angel noses out of the field, leaving it behind, and the Cutlass is only seconds behind on a parallel course.

What seems like minutes is moments as the Angel acquires her target, two missiles firing simultaneously. “They got one off!”

Jarrett’s warning is bitten off as I hear the V82 firing in earnest, I watch the incoming speck on my HUD. Alarms are going off everywhere, filling the cockpit with a cacophony of sounds. I see an explosion out of the periphery of my vision, feel the Angel pull against my power to the right, my body flying sideways with the momentum, head connecting with the steel plating of the cockpit.