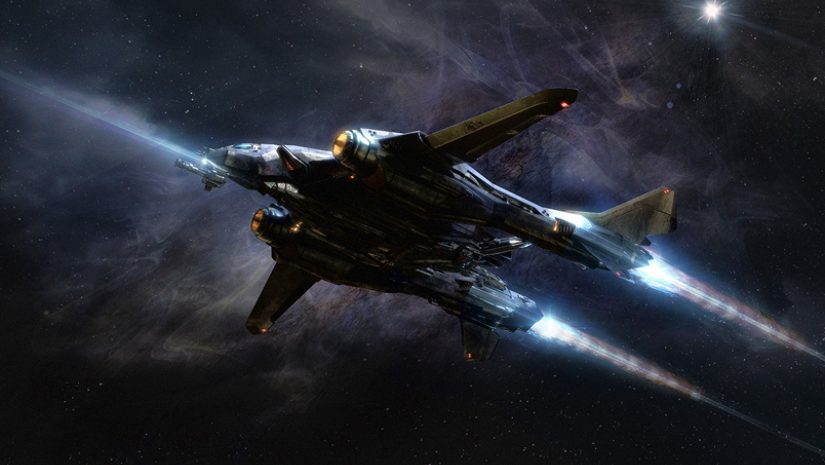 Why Should I Fly: The Vanguard Written Tuesday 9th of February 2016 at 09:01am by FourthOracle

Hello Citizens! Welcome to the second week of ‘Why Should I Fly’ by FourthOracle, this week looking at that most excellent evolution of flight, the Vanguard! The first long-range fighter announced by CIG, the Vanguard...

Hello Citizens! Welcome to the second week of ‘Why Should I Fly’ by FourthOracle, this week looking at that most excellent evolution of flight, the Vanguard!

The first long-range fighter announced by CIG, the Vanguard is massive compared to its lighter fighter
counterparts. For reference, the standard F7C Hornet weighs nearly 22,000 Kg, while the Vanguard
weights over double that at 45,000 Kg, making it the tubbiest kid on the block by far. The immediate
question that arises is: why make such a massive space superiority ship? Usually the idea is to make a
fighter small and agile, yet well-armed so that it can deliver its damage while avoiding incoming fire,
but one of the main features of the Vanguard is its touted ability to suffer over 33% hull loss and still
fly home safely. So what advantages does the Vanguard Warden provide?

The Vanguard fills a few interesting and important niches in the Star Citizen universe thanks to
two things: its larger-than-average fuel supply and the aforementioned durability. As its name suggests,
it was initially built to populate advance forces. Ditching the need for a carrier or a nearby refueling
station allows the Vanguard to be much more versatile than the other ships in the UEE lineup, opening
up missions where a carrier isn’t feasible (such as when the jump tunnel is a bit of a tight squeeze).
They can act as a smaller force to attack without drawing nearly as much attention as well, or act as a
scouting party with teeth. Also, with a squadron of Vanguards in their hangars, space stations are
capable of defending a much wider swathe of area.

Cargo hauler defense, however, is what makes the Vanguard especially interesting and exciting.
Some fighters, such as the Avenger or the Hornet, raise concerns over their effective operational
distances due to being adaptations of carrier-based fighters, while the Gladiator’s missile compliment
may struggle against lighter targets. The Vanguard promises to cover both issues with its range and its
weapons compliment. It has four S2 weapons and a single S5 weapon slot, which comes gimballed by
default, coupled with missile racks and a manned turret with a pair of S2 slots, enough firepower to
make Rambo blush. But there’s a caveat: in order to utilize all of this firepower, you need that second
person in the turret. It’s a requirement that goes hand-in-hand with the sort of plane on which the
Vanguard is based: the World War II heavy fighter. Heavy fighters were originally designed in the 1930s to carry out missions in distant arenas.
Their signature visual indicator was a pair of wing-mounted engines, typically bulkier and more
efficient, which freed up room for larger guns and bomb bays. During World War II, these long-range
planes were utilized as escort fighters that would accompany larger bombers, such as the famous B-17,
on their runs. CIG was perfectly aware of this when they named this ship the “Warden.” However,
these heavy aircraft generally failed in dogfighting conditions because they were so easily
outmaneuvered by smaller, lighter attack craft launched from nearby airfields, with a few exceptions.
The best they could do was interdict these lighter craft in order to buy time for their bombers to deliver
their payload. Due to all of these factors, the role that best suited the heavy fighter was that of an air-toground
combatant, otherwise known as a fighter-bomber. (As it turns out, there’s a variant of the
Vanguard that fills the role, entitled the “Harbinger”) Today, the term “heavy fighter” is antiquated
simply because warfare doesn’t call for them any longer; the increasing speed of planes powered by jet
engines coupled with missile technology downplays the importance of armor in current warfare
strategy. Their role of escort is also rendered redundant since missiles are generally used in place of
bombers.

But the unique demands of space flight and combat on a galactic scale have pulled down the
stairs to that old attic, and the heavy fighter is being dusted off yet again to test the mettle of a
technology that was rendered obsolete less that twenty-five years after its original conception. The
Vanguard Warden is what’s become of that trek into history, but how does it fare?

Despite being so far in the future, the Vanguard draws a lot of inspiration from those old
designs; try putting a screenshot of the Vanguard and a photo of a World War II heavy fighter next to
one another, and the similarities will begin to show themselves. The static twin engines are present,
which frees up room along the center for the weapons and the bomb bays. Fortunately, I can say that
the Vanguard takes those old theories and improves upon them massively. After many hours flying the
Vanguard Warden in Arena Commander, it’s clear that this is one of the most brutal fighters available
right now. The weapons compliment is terrifying, as I mentioned before, but it’s also changed the
aspect that made the old heavy fighters of WWII so weak: the Vanguard is much more nimble. Its top
combat speed isn’t fantastic—only 180 m/s—and its acceleration is a bit lackluster, but it doesn’t have
any issue keeping its guns trained on the target, unless you go for a massive sweeping yaw. Taking the
concept out of atmosphere helps, since fighters can move one way and fire another, further nullifying
the old problems with heavy fighters.

However, especially with its massive 25,000 REC price tag, I would hold off renting it for a
couple of reasons. The first is the lack of multi-crew support in Arena Commander (except in Free
Flight mode). That gunner seat is important for the Vanguard, as it provides the edge that most other
fighters lack. Even in Crusader, the netcode and servers aren’t quite ready for turrets, meaning that if
you do bring someone along for the ride they will likely meet with frustration as the PIP jitters back
and forth. The second issue is that the damage system is only rudimentarily implemented right now,
and the Vanguard’s ability to shed so much of its hull is a major selling point that just isn’t in place yet.

Even with these issues, the Vanguard has a few secret edges. On most ships, at least some of the
guns are placed on a set of wings. With the Vanguard, however, nearly all of its terrifying weapon
complement is placed on the nose, with the exception of the turret. This means that even as bits of the
Vanguard are sheared away, as is wont to happen in a dogfight, the guns are in a much better position to
stay intact. Any pilot who has spent time fighting in Arena Commander knows how awful it is to have
weapons wrested away from you when you lose a wing, and how difficult it is to bring down targets
once that’s happened. On the Vanguard, though, there is a much better chance of keeping all guns
blazing through an extended fight.

Overall, the Vanguard Warden is a terrifying ship to behold despite its current deficiencies, and I
imagine that it will become a common sight in the persistent universe due to its versatility and range.
Mercenaries will likely enjoy using them as escort ships, and I would expect to see squadrons of them
flanking massive Hull-class craft or even Carracks on exploration missions. Pirates would do better to
look elsewhere, despite its combat capabilities; a cargo space of 0 is pretty cramped. But if I were a
Vanduul and I spotted the visage of a Vanguard, I’d think twice before risking my leathery hide.