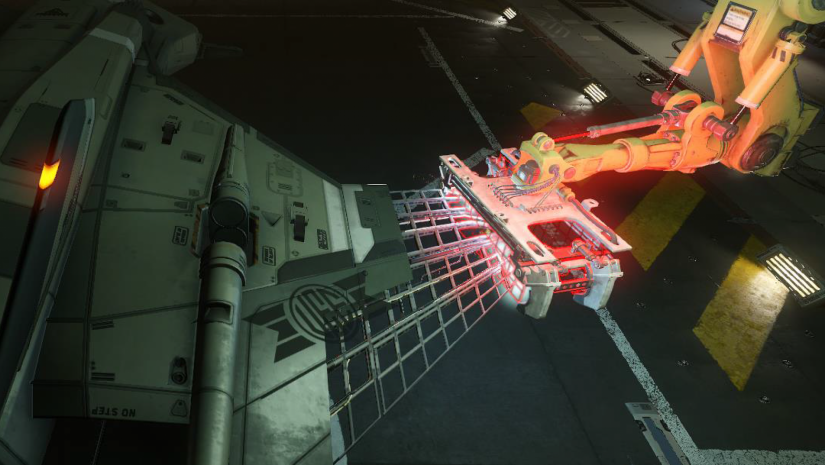 Exploring how Cloud Imperium is creating emotional attachment to our ships in Star Citizen.

In a recent ATV, a very small section was dedicated to the Item 2.0 system, specifically showing off a personal scanner that required a battery and component parts to function. Though this piece seemed to fly under the radar (pun intended) it was easily the most exciting part for me, just as the room pressurization system excited me some months ago for one reason: it's a small view into the gameplay of Star Citizen, a view that has become rarer over the last two years. And let's get one thing straight here:

GAMEPLAY WILL BE THE MOST IMPORTANT PART OF STAR CITIZEN.

I love the ships, and I've lost hours wandering around the Starfarer to the point that I can navigate it with ease, but what I'm doing when I wander those cramped corridors is imagining the gameplay that will take place: managing fuel storage and refueling; monitoring scanners for potential threats; replacing old parts for new ones; closing the blast doors behind me in preparation for flight. Sure, Mister Tubbs is pretty, but it's in service to an experience, and it's this experience that will tie players to these imaginary things that they own, from the largest ships to the smallest tools.

Every glimpse of gameplay in Star Citizen has shown us the same pattern: players' avatars use tools to accomplish some task, be that mining, bounty hunting, or shipping, and each of these tasks is performed with a universal goal: to accrue capital. Though some games emphasize accruing capital as a social activity (see: EVE Online), Star Citizen promises that going a more solo route will be a fun and rewarding experience, as well. For this to come true, the interactions with items must be interesting and engaging themselves.

Most people are interested in Star Citizen for the careers that it will provide, but in practice, many games tend to be performed in ways that run counterintuitive to this. For example, in For Honor, my friend enjoys the combat itself, but he plays a mode he enjoys less that downplays the importance of the combat because it nets him more experience points. In a sense, he is denying himself the gameplay that he desires because the game has given him a different goal—the game is guiding him away from what he really wants to do.

So how can Star Citizen avoid this trap? It's not enough to say that “everything will be fun,” since some people simply won't enjoy certain aspects of gameplay; Cloud Imperium Games is designing an experience in which people with many different interests can come together in the same game world, not a theme park where it's expected that everyone must try everything whether they want to or not.

Instead, it's been implied that, no matter what, there will be certain zones where players can perform the gameplay that they desire, and the presence of the 9:1 ratio of NPCs ensures that there will always be room for the profession a player wants to pursue—all they have to do is go to the right place. In this case, the capital creates an extra layer of gameplay, giving players a sense of direction and place.

When these in-game incentives are used correctly, they can guide players in the direction that will give them the most fulfilling gameplay, and sometimes, merely its existence can be enough to help. By having some places offer better monetary rewards, it can narrow down a selection of locations that would otherwise seem daunting. For example, if someone is starting the game with a cargo hauler, they may have dozens of systems in which to begin. If, however, two of the planets in these systems offer much better pay for shipping services, then what was once an overwhelming number of choices becomes more manageable; even if none of those planets suit the player's needs, it gives them a place

The fact that money isn't an incidental thing in Star Citizen gives those items a player acquires a greater sense of worth, in theory. In a game like World of Warcraft, gold is often accrued simply by playing the game like normal, and acquiring more may mean simply doing a raid a couple more times or doing a couple more quests. In Star Citizen, however, money must be a part of every decision made: “Do I have enough money to repair my ship before the next outing?” “Will this job cover the maintenance costs for performing it?” “What's the risk vs. reward for this job?” etc. Therefore, those things on which a player spends that money becomes significantly more valuable.

Star Citizen takes it a step farther, however, by making these items require upkeep, everything from suits to ships to small devices. I mentioned already that in a recent episode of Around the Verse, CiG showcased a small handheld scanner that could be turned around by the character so it could be inspected. In the back of this scanner was a small slot for a battery, and I admit that when I saw this, I got a bit giddy. The player, in order to continue using the device, must replace its battery and make sure that its component parts remain operational through maintenance beyond the initial purchase cost. If we assume that the economy in Star Citizen is designed well, then the effort involved in maintaining an object can increase the perceived value of the object and create a sense of attachment, making decisions in Star Citizen immediately meaningful.

But if it's done poorly, then this kind of maintenance can become a chore. Take, for example, Ark: Survival Evolved. For everything it does well, the maintenance of each article of clothing and weapon becomes horribly tedious. There's no decision to be made with an object's maintenance—it simply must be done, and it slows down the gameplay. Games with weapon degradation suffer a similar problem. If these games made these valuable items require more materials, then it could become a truly interesting and thoughtful part of gameplay, as Star Citizen hopes to do.

This itty bitty scanner is also needy in that it will take up valuable space on the person's body. As far as we can tell, the inventory system in Star Citizen won't be like most other games where you can hold three pistols, 300 rounds of ammunition, and 20lbs of healing gear between your buttcheeks. This means that bringing that scanner will be a conscious and important choice, since it precludes so many other options. This doesn't include whether or not you'll want to bring spare batteries, either, giving over even more space to the device. Limited gameplay like this necessitates roles for players, so that on an exploration crew, it's entirely possible that you will have a “scanner guy,” a “medical guy,” and maybe even a “weapons guy,” creating defacto roles almost like in a standard roleplaying game.

Star Citizen, for all of the hype around multi-crew ships and interactive player experiences, is a materialistic game at heart—the motivating factor for players to group together won't just be because it's fun, but because it's an efficient use of resources. After all, nobody wants to feel like a burden when their friend drags them along in their Super Hornet. (I wrote another article about this specific topic here) This is another example of how limited money and space, if used correctly by Cloud Imperium, can be used to entice players into fun, engaging gameplay: by making these players feel useful.

Of course, all of this is contingent upon Cloud Imperium Games' ability to craft meaningful player experiences, but the foundation upon which Star Citizen is based provides ample opportunity, and since their team seems to consist of talented and experienced developers, I, for one, remain hopeful.