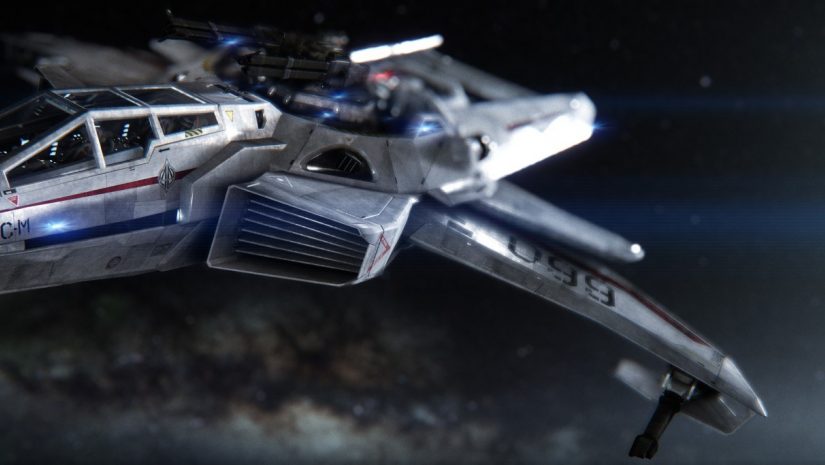 The Value of FriendShip: On Maximizing Efficiency in the 'Verse Written Wednesday 7th of December 2016 at 09:28am by FourthOracle

Citizens, today we discuss playing Star Citizen with friends and what some of the considerations may be when trying to maximize the effectiveness of your group.

During my playtime of Planetside 2, I was most commonly a platoon leader, meaning I would lead up to 48 people at a time. My favorite maneuver was to strategically have the women and men under my command spawn a massive column of tanks to siege bases, support infantry, and smash spawn points. When preparing the troops, the question often arose: is it more powerful to have everyone spawn their own tank, or to have half of the people load into the turrets and give each tank more power? The answer was almost always simple: more tanks means more power, and two tanks would usually beat one tank with a turret. The equation looks like this: [MORE = BETTER]. This seemingly simple fact carries over to most other games, which is why I did a double-take when I first saw that the Super Hornet, the UEE's beefy fighter, had two seats instead of just one. Even if the second pilot only had an Aurora LN or something similar, wouldn't it be more worthwhile to have them in their own ship rather than in the co-pilot seat?

To truly answer this question, the concept of resources in multiplayer games must be understood, and I don't just mean minerals and Vespene gas. In any multiplayer game, there are two fundamental resources: players, and the tools they're given. These are provided in varying degrees depending on the game; fighting games limit the resources to one player on each side and one character to each side, while games like Battlefield, on the other hand, set the player count much higher while scaling the resources accordingly. Typically, these games give the players equal access to resources in the interest of fairness. (Some competitive games, such as Evolve and Natural Selection 2, have attempted to create balanced asymmetric experiences, but their limited success is testament to how difficult this balancing tends to be)

With limited resources, however, comes the question of opportunity cost. For simplicity's sake, let's look at Battlefield. At the beginning of a match, each side is given a limited number of tanks, so the problem of how many tanks to spawn doesn't exist as it does in Planetside. There is a holdover, however: is it worth it to put a gunner into each of the tanks? Well, a player in the gun of a tank means there's one less pair of boots on the ground, so the opportunity cost of putting a player in a tank is equal to one footman. Typically, a secondary gunner in a tank is worth more than a ground pounder, so the answer is usually, “absolutely, I want that gun manned.” But when applied to Star Citizen, this problem becomes more complicated.

Suppose there's a band of five pirate fighters attacking a small orbital station, and they're calling for aid from the planet surface. You, your buddy Sally, and a ragtag group of three other do-gooders decide to answer the call. You have a Super Hornet, while Sally has herself a rugged Gladius. This situation is much more like the Planetside question: each player has a potential vehicle of their own, but there is also the option of both players hopping into one ship. So what's the best course of action? Here, we can designate the opportunity cost of the copilot equal to one Gladius, but the benefits of a copilot in a Super Hornet are fundamentally different from those of a gunner in Battlefield or Planetside—rather than simply adding another gun, the copilot is able to boost the overall efficiency of the ship, moving power in case of damage and setting shield regeneration priorities. Right now, many of the systems that will be in the final game don't exist yet, but we can estimate the impact of that person on a fight. For the sake of simplicity, let's be generous and say that adding that co-pilot extends the Super Hornet's lifespan by 40%. In this case, the co-pilot allows the Super Hornet to put out 40% more damage than it would otherwise be capable of doing, but this assumes that the pirates will fire at the Super Hornet at all, and anyone with thirty minutes in Arena Commander knows how futile it can be to attack one. (I've taken to calling them Space Bricks) So if the Pirates make the oldest n00b error in the book and attack the tank first, only then does that 40% come into full effect. Adding another Gladius to the mix, however, will provide something closer to 60% or 70% of the Super Hornet's damage output and survivability, making the choice clear—again, [MORE = BETTER]. So, off each pilot goes in their own ship to save the day, hurrah.

But this doesn't take into account other factors. After all, Star Citizen is an MMO, not a traditional multiplayer game, and so other factors have to be added to the opportunity cost. Suppose Sally's Gladius is old, and one of the guns has been jamming from time to time, thus reducing the value of that fighter. Or maybe the structural integrity of the Gladius was compromised in a previous act of interstellar heroism and she hasn't been able to scrounge up the money for repairs. What if the quantum drive was damaged and may fail on the jump to the station? Suddenly, the opportunity cost has changed.

This Robin Hood-esque example is straightforward thanks to its similarity to other multiplayer games, namely with the limited supplies and players, but maybe you're not looking to put together a band of merry men (and women). Let's suppose that a man named Mr. Moneybags messages you and says he's willing to hire your services to protect his Orion [© RSI] while he mines in a particularly dangerous part of an asteroid belt, and he is willing to pay you handsomely. Now it's time to start talking cash. As a completely arbitrary number, let's say he's willing to pay your firm 100,000 UEC for this job. With a couple of $$s in your eyes, you accept. Being the money-grubbing individual you are, you don't want to spend a single cent more than you have to—after all, you're in the business to maximize profits, and you'll be damned if anything is wasted. But you also know that pirates will be watching from the shadows of massive asteroids, and if you come underprepared, they'll swoop in. The asteroid belt is far away from where your ships are docked, meaning that your ships' quantum fuel tanks will be nearly empty after a round trip. Asteroid belts also tend to put wear and tear on your ships, which will increase the cost even further. Let's apply another arbitrary number and say that the repair, refuel, and pilot salary cost on each of those ships adds up to 3,000 UEC. To send three ships, you'll be spending 9,000 UEC. That's already a sizable dent in your profits, but three pilots in three Hornets just isn't enough.

This is where that second seat comes in. The ideal scenario is that you send as few ships as possible to minimize the cost while maximizing the efficiency of each of those ships. The opportunity cost of hiring a player (or NPC), however, stays mostly flat—let's suppose the average cost for each copilot is 700 UEC. Going off of our numbers earlier, each Hornet gets about 40% more efficiency for having a co-pilot. That means that, for 3,700 UEC, you're getting 4,200 UEC worth of combat effectiveness. Altogether, you're getting 12,600 UEC worth of Hornets for 11,100 UEC, an increase of 1,500 UEC in value. Suddenly, those co-pilot seats are starting to look pretty nice. Though these numbers are probably not representative of the real game, the optimization process will likely look quite similar. These same principles can be scaled up or down appropriately, all the way down to two buddies who don't want to pay for two ships' worth of gas and repairs. This is one of the fascinating things about MMOs: the resource limit on players doesn't exist as it does in other multiplayer games, and so dynamic decisions may be made based on this fact.

But the Super Hornet wasn't designed with profit maximization in mind.; it was built for military purposes. So why, in-universe, did the military give it that second seat?

It must be understood that many UEE fighters, such as the Hornet, Sabre, and Gladius, were not built for long-distance travel; they're generally meant to be launched from a platform, perform their function, then return to that same platform when their work is done, and the most important and prominent launching platforms are the carriers. These carriers, though large, have extremely limited space, and so their fighters must be as efficient as possible, and one way of increasing efficiency is adding another operator. This allows the pilot to concentrate solely on piloting duties and fly undistracted. Compared to a fighter, an operator takes up far less space, and so it's more cost-effective to bring another UEE soldier rather than increase the size of the carrier.

This design choice hints at an underlying characteristic of Star Citizen's universe: materials are much less plentiful than people. After all, a co-pilot could probably take care of most of the Starfarer's functions on his own while most of the turrets could be made automatic, unless some sort of Butlerian Jihad-style AI rebellion had taken place between 2012 and 2946. With people in shorter supply, it only makes sense to build ships which can utilize the talents of multiple people, thus increasing the efficiency of the available resources. After all, if you have a Super Hornet and your buddy only has an Aurora, you both can benefit greatly from letting your friend into your second seat. (Just keep in mind that he might want to be paid for their services)

But besides all of this, there is one more reason why you may want to bring along a copilot, and it may be the most important reason of all: it's fun to play with friends. I can tell you exactly why I upgraded my Aurora to a Reliant—because I want to go space truckin' across star systems with my brother, Cory, or maybe retrofit our ship and go exploring with him.

Star Citizen will be a much more complicated game than either Planetside 2 or Battlefield, but the patterns that govern decisions in other multiplayer games are still present; these patterns simply have more variables than most, and opportunity costs must be considered carefully. These costs are much more nuanced than simply trading a ground trooper, for a bigger gun, and available resources will be different in every situation. Critical thinking will be key to making effective use of players, the most important resource in almost any game.

After all, space is a lonely place—you may want to bring some friends.