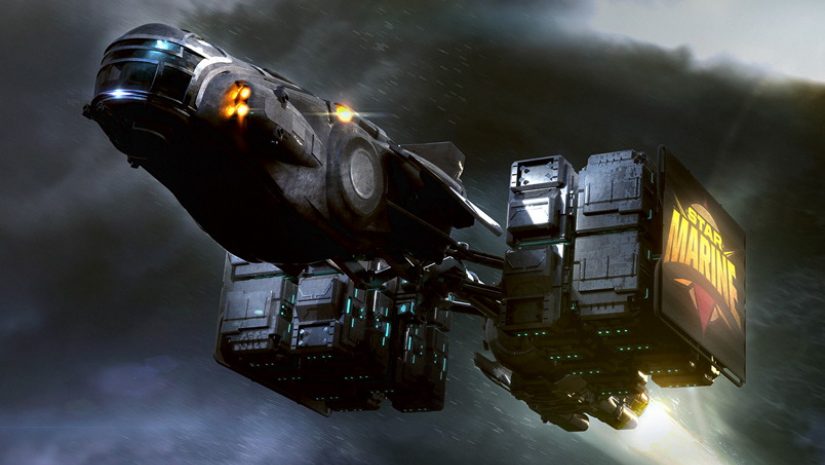 The Hull Truth – A Look at the MISC Hull Series Written Saturday 2nd of May 2015 at 04:00pm by JakeAcappella

Hey Citizens! Here’s a look at the new dedicated freighter line from MISC. On April 24th, CIG revealed the much-awaited line of cargo vessels from Musashi Industrial &amp; Starflight Concern, the Hull series. From the...

Hey Citizens! Here’s a look at the new dedicated freighter line from MISC.

On April 24th, CIG revealed the much-awaited line of cargo vessels from Musashi Industrial & Starflight Concern, the Hull series. From the single-person trucker of the Hull A to the massive economic flagship of the Hull E, MISC has created a line of ships to fulfill every trader’s needs. Here we will break down the nit and grit of each model of the Hull, as well as delve into some theories on what range of jobs they could do in the Persistent Universe. 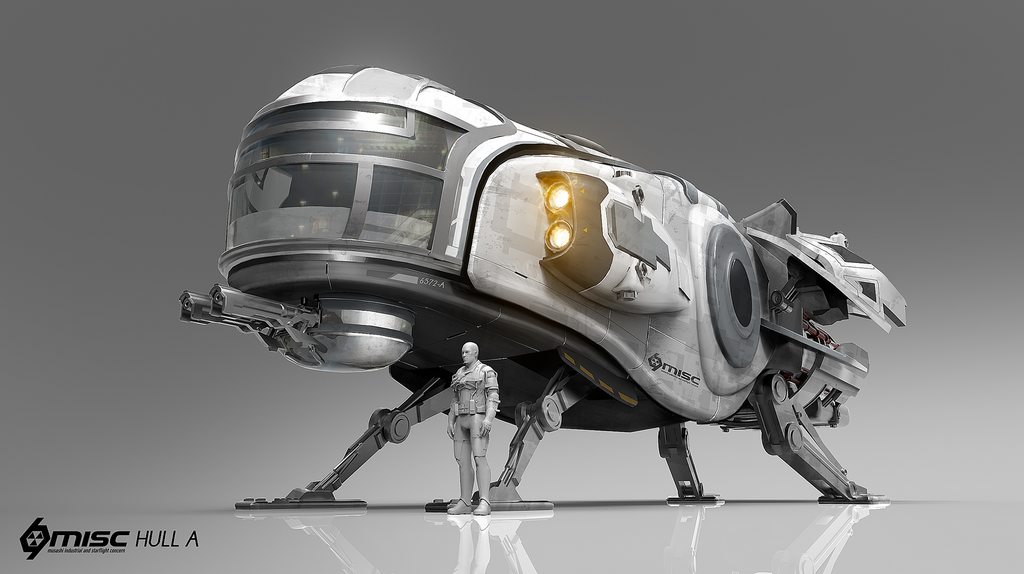 The Hull A is the smallest of the bunch. Coming in at 22 meters long, it is just slightly longer than the Aurora and the Mustang. It has around twice the cargo capacity of the Aurora CL, sacrificing the larger hardpoints the Aurora has. The Hull A has two size 1 hardpoints that are on a gimbal on the nose of the ship. It has a massive TR5 engine to push all that cargo across space, the same size engine as the Avenger.

A couple of the things the ship page mentions is that the Hull is the perfect starting ship for a trader. It’s inexpensive, so perfect for someone just setting out into the ‘verse. It’s equipped with a small sleeper area for the new hauler to have a place to rest. Along with hauling cargo, the Hull A could also be used as a ferry, carrying people from planet to planet. Likely the economic option for people who would rather not ride on an 890 Jump or Genesis. This ship is the likely candidate for people on their way to experience the economic side of the game, rather than combat.

Click here for the Hull A Q and A! 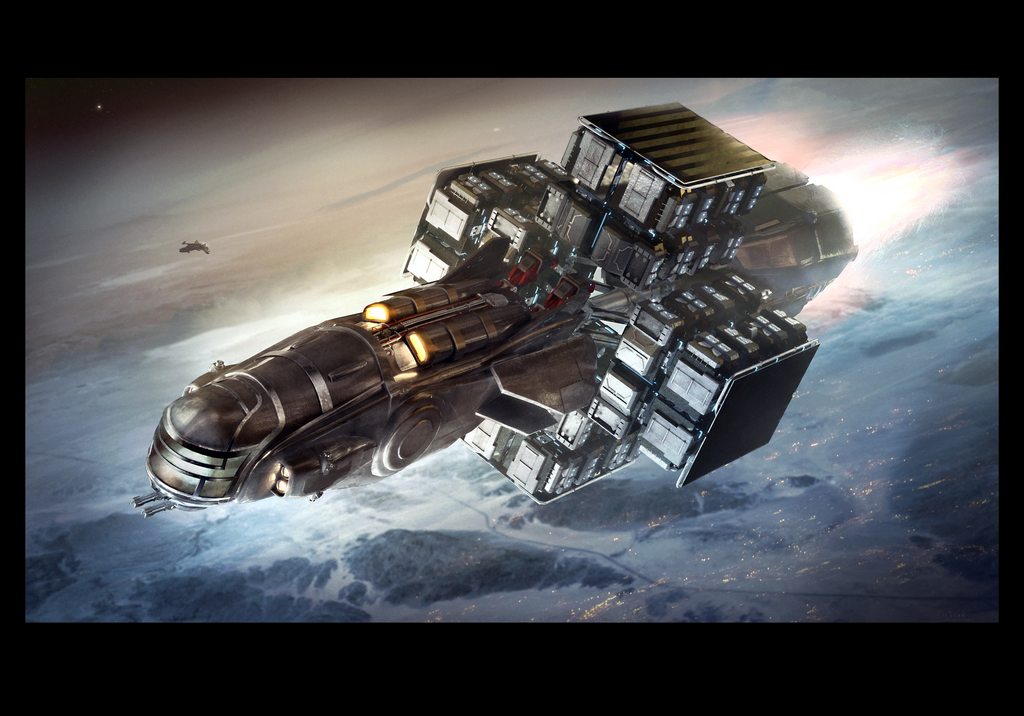 If the Hull A is a tad too cramped for you, then the Hull B might serve you better instead! At almost the exact same length as as Freelancer Max, the Hull B carries eight times more cargo than the Hull A while still only requiring a crew of one – giving it an advantage in the eyes of freighter captains who like to fly solo. At the same time, given the size of the ship versus the two TR8 engines, the Hull B is a lot faster and more maneuverable than it’s larger Hull brethren, giving it and edge when it comes to getting in and out of a trouble zone quickly. Its weakness lies in its small armament, only sporting two size two gimbal mounts, which is minimal for a ship this size.

So you might be asking yourself, “Why would I pick a Hull B over a Hull C, D, or E?” The answer is: costs, as well as job requirements. Not every mission is gonna require for 4600 SCU of cargo – some will call for substantially less while still netting a respectable profit. Furthermore, the larger Hull ships will cost more to outfit, more to refuel, more to repair, etc. Not everybody is gonna have the finances nor the reason to spend tonnes of money equipping a bigger vessel when a smaller one will perform just as well, if not better, in certain circumstances. Plus, with a max crew of one, that means any profits from the trip will go directly to the Captain, as they won’t have to be split among any participating crew.

Click here for the Hull B Q and A! 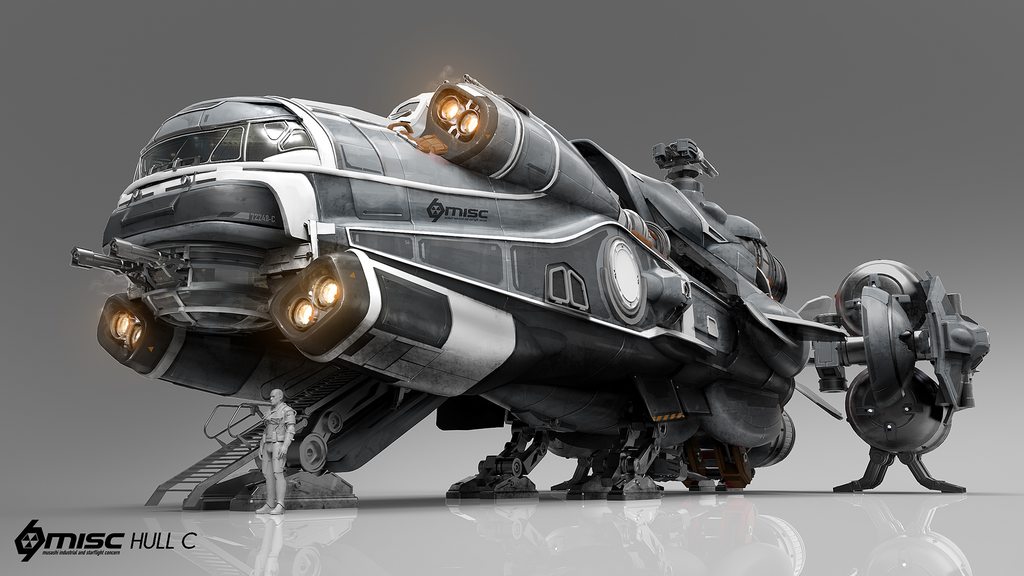 The Hull C is the sweet spot in the middle of the Hull line. Not too big and not too small, it can carry a hefty amount of cargo while retaining some of the maneuverability of the smaller Hulls. It is 105 meters long, just a hair longer than the Banu Merchantman, but about a third of the width at 40 meters. The Hull C shines in cargo capacity, carrying about the same amount of cargo as the Merchantman, while being much less expensive and having a much smaller profile. Six TR8 engines push the C through space. To put that in perspective, the only other ship at the moment that has engines that large is the Bengal carrier (as of last available specs), and it only has four. The C can defend itself decently with its six size 2 and two size 1 hardpoints, all on a gimbal, and can equip a size 7 shield generator.

As for its place in the Persistent Universe, the Hull C is described in the original post as “the most common ship in the galaxy”. Once the PU goes live, you will likely see the stars littered with these ships. A use comes to mind immediately that you could likely see these ships accompanying an Orion. The C is small enough to follow the Orion and could help ferry the ore to keep the Orion running longer without having to head back to unload its cargo. This could also apply to salvage ships, such as the Reclaimer.

The Hull C is where the modularity of the cargo spindles will really begin to shine. The C is the first of the larger set of ships in the series, so it has a lot more room to expand. It can attach anything from the big Stor-All container boxes to specialized containers for carrying different things like liquids, fuel, perishables, livestock, or even ships! The article also goes on to mention that there will be third party manufacturers in the ‘verse that make modified attachments for these spindles, allowing for things like additional shield generators, sensor suites, or even gimballed turrets. This could allow for a freighter pilot to be able to hold his own if he can’t quite afford a fighter escort, and the Hull C is the first option where not a lot of cargo would be sacrificed if these modifications were made. The Hull C Discreet mentioned in the original stretch goal would also be made possible by this modularity, making the perfect smuggling ship possible.

Click here for the Hull C Q and A! 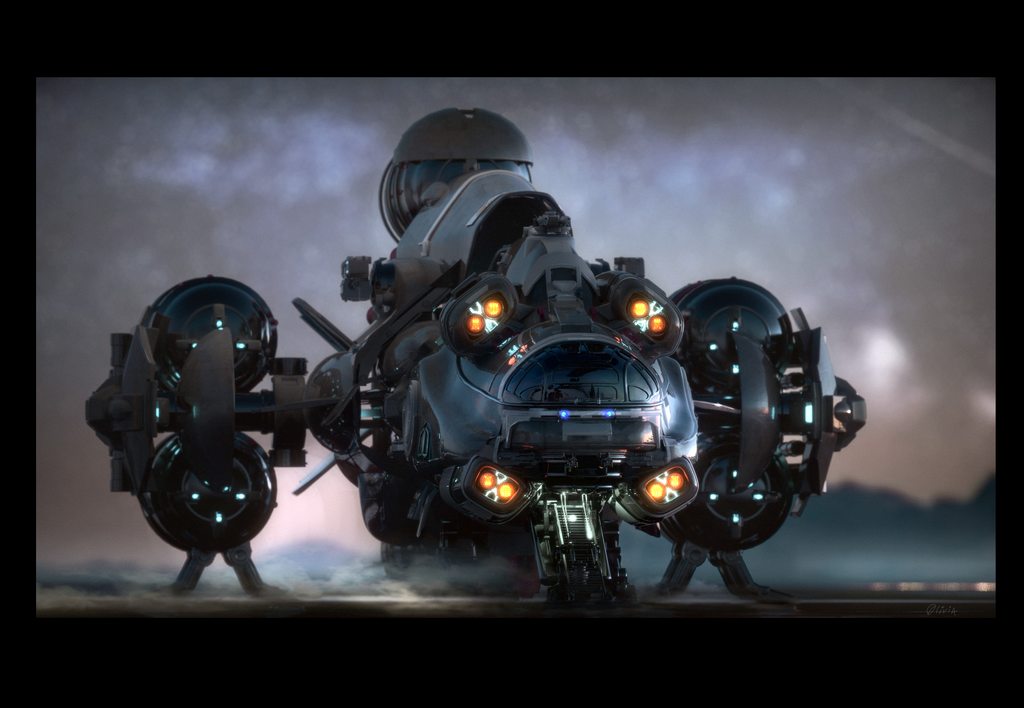 The Hull D is the first step into the larger cargo haulers. A significant leap in size over the C, this ship can move over four times the cargo as the C. This ship has about fifty percent more cargo as the Orion, so this would be an ideal companion on a mining operation. It’s 209 meters long, putting it snugly between an Orion and an Idris-P. It crews up to five, likely necessary to man the four pairs of gimballed hardpoints, three pairs are size 3, one size 2. It was confirmed that all Hulls can be manned alone, so likely these weapons could be slaved to the pilot seat, or possibly modified to have them be AI-controlled. The Hull D also sports eight TR10 engines, larger engines than any ship in the game at this point.

The Hull D is extremely robust. Its added size also gives it a lot more options for modularity. It’s able to go very long distances, able to make multiple jumps through jump gates without needing to refuel. It’s also able to refuel in-flight from a Starfarer or something similar. However, it does suffer from its size as well, which severely limits its speed and maneuverability. If strictly being used for cargo, the Hull D will need an escort if flying in dangerous space. However, CIG did mention that there is a military spec Hull D in the universe, likely using the larger power plant to power weapon and shield modules and turning the cargo hauler into a force to be reckoned with. These mil-spec Hull D’s will likely be seen in carrier fleets as weapon platforms.

Click here for the Hull D Q and A! 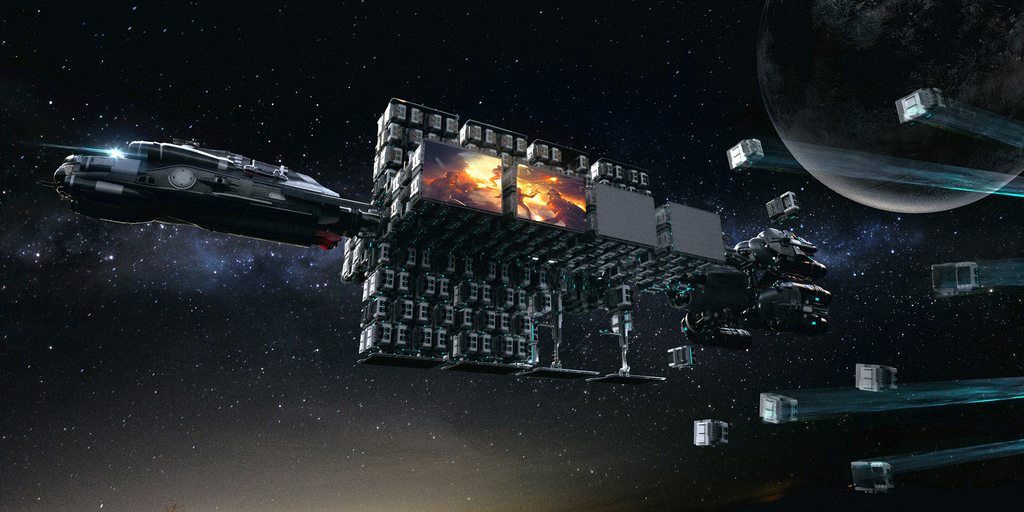 What’s longer than a Javelin, taller than an Idris stacked on top of a Reclaimer, and can carry twice as much cargo as every other current (as of April 27th) ship combined? If you answered “Hull E”, then you’d be right! This thing is a monster. At 372.1 meters long, 104 meters wide, and 104 meters tall, the Hull E is a behemoth of a ship. Currently described as the largest cargo-dedicated ship in the ‘Verse, the Hull E is matched by none in terms of it’s sheer transportation capabilities. It comes equipped with ten TR13 engines – engines so large that an Aurora can fit inside one of them. Sporting 8 weapon hardpoints, the Hull E also poses a significant threat to any would-be attackers seeking to relieve her of her cargo – while it’ll be a very tempting prize to pirates, it’s also very much capable of holding its own. Then again, given how much the ship costs, as well as the value of any cargo it would be carrying, it would be unwise to fly this leviathan without a well-equipped escort.

If you’re thinking of buying this ship, ask yourself if you can genuinely afford both the upfront financial cost as well as the in-game support costs. In addition to purchasing the ship, you’ll have to pay for its maintenance, its crew, its almost-mandatory escort, its tremendous fuel costs, its insurance, and it’s repairs should it take damage. Because of this, the Hull E is not for the faint of heart – in fact, it’s best suited for large organizations that can afford to equip, load, and conduct trading operations with it. However, the benefit could be well worth the cost, as the modules could carry not only cargo, but ships and passengers as well.

Click here for the Hull E Q and A! 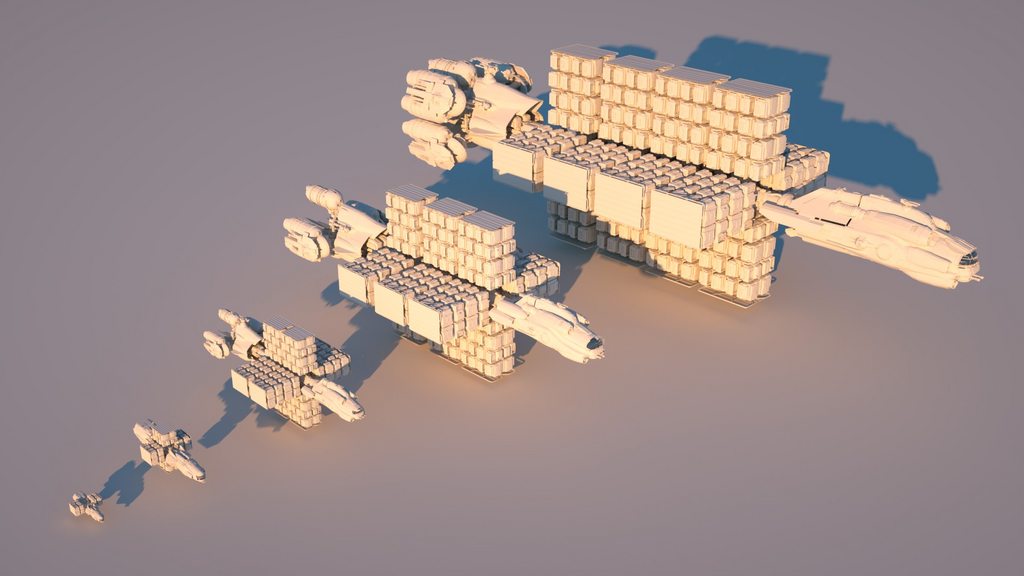 The amount of versatility in this line of ships will make itself known in the Persistent Universe. While the majority of the people using this ship will be using it for hauling space potatoes across the quadrant, the creativity that these ships allow for add an order of magnitude to the diversity we will see in Star Citizen. Even still, the amount of content the cargo ships provide is two-fold. There are missions for the cargo hauler, as well as anyone who would have the urge to liberate that hauler of its cargo. Though with the amount of customization these ships have, with the ability to add defensive and evasive countermeasures, pirates definitely should not view these ships as a free meal. Not only that but according to the recent Q and A’s the cargo containers will also have their own armor and shields, not only to evade sensors but to protect against damage.

Seeing a line of ships like the Hull really speaks to the amount of depth the galaxy will have in Star Citizen. It’s always cool to see ships being so popular that aren’t made for combat, the Hull being the most recent of the bunch. There’s even a sort of cult following around the Starfarer, and it would surprise you how many people answer the question “What do you want to do in a sci-fi future?” with “I want to haul space fuel”. Most video games are based around combat, and while that’s an option in Star Citizen, it’s one of many. The Hull brings yet another slew of avenues of gameplay into the already massive world, and you’ll likely see many a hauler out there in the ‘verse soon enough.

If you want to pick one up, they’re available in the concept sale until May 4th.