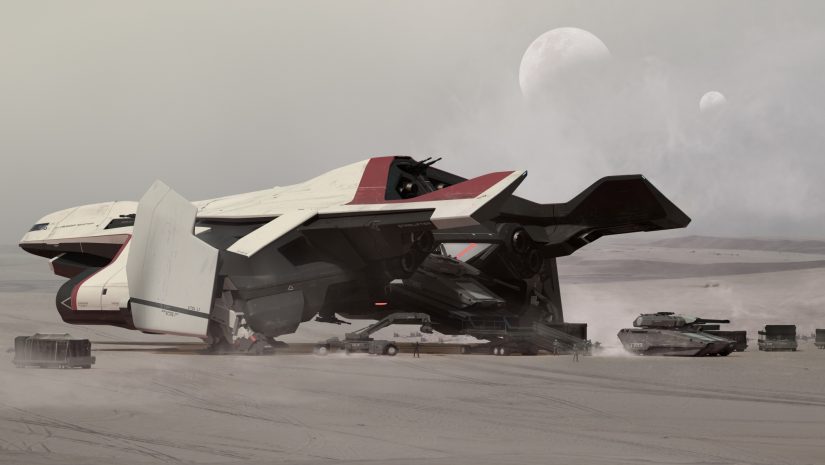 Star Citizen: The Immortal Hercules and his Tank Written Thursday 10th of May 2018 at 10:47pm by Nehkara

I'm back!  Check here for my ramblings on the Hercules concept sale.

It sounded like “tonk” in your head, didn’t it?

Greetings Citizens and welcome to my thoughts on the ongoing debate over the Crusader Industries Hercules concept sale, which is still in the phase where only Concierge can acquire the behemoth.

Let’s start off with a brief discussion of the beast itself, the Hercules, a heavy transport ship just announced just last week. It comes in 3 flavours: C2 for civilian cargo, M2 for military cargo, and the A2 gunship, which sounds fairly terrifying.

The prices are as follows:

Now, let’s talk controversy. As has happened before during the development of Star Citizen, and will likely happen again, there’s currently a bit of a furor going through the community about lifetime insurance (LTI); what it means, when it’s offered, and how to get it.

The current controversy arose over the continued and increasing trend of CIG favouring new money over old. In this case the non-Warbond ships, which can be purchased with store credit, have 6-month insurance included, while the Warbond ships, which can not be purchased with store credit, come with lifetime insurance (LTI). To sweeten the pot, the M2 Warbond includes a Tumbril Cyclone (normally $55) while the A2 Warbond includes a Tumbril Nova Tank (normally $105). The Warbond Complete Pack has LTI, a Cyclone, and Nova Tank, and two skins for the Nova tank.

The debate currently raging stems from the perception that CIG is favouring new backers over existing backers; new money over old, and that CIG is being in some way anti-consumer, and in general not cool. There are some also arguing that there exist also a hidden cadre of investors who are controlling what CIG are doing, and how and when CIG ask for funds.

This side is countered by those that either don’t care what incentives are offered for new money, or simply believe that it is important for CIG to bring in new money.

Additionally, there is the ever-present group who are incredulous that anyone would pay that much for a spaceship to begin with.

I would like to take this moment to remind everyone again that any purchases made above and beyond a game package are pledges to support the development of Star Citizen.  I see a clear difference here between a creative funding model that allows excited backers to grab certain ships very early on as a way of supporting the game, and locking pieces of content away behind DLCs.  Everything in Star Citizen can be acquired in-game.

I would also like to say that CIG makes it blatantly obvious that they are very appreciative of their fans and backers. Frequently. They thank Subscribers and backers each week, often multiple times per week. The developers show up to events and generally seem thrilled to talk to fans for hours about the game. There are assorted perks depending on where you fall on the spectrum (ha!) of backers; long-time backers have a myriad of rewards from the stretch goals, subscribers get a raft of goodies and a lot of love, concierge backers have their own subset of perks including priority support and their own newsletter, etc.  CIG’s appreciation of all of their backers is violently obvious.

One thing important to clarify is that here at Relay, we don’t tend to deal in speculation. We always try to use statements from interviews, CIG’s shows, and public crowdfunding data to reach the best conclusions we can, based on the legitimate and verifiable data that exists at any time. There has been no indication at any time in the past four years that CIG has had vague investors trying to force the market and raise more funds, of that CIG are on the verge of going bankrupt, or that CIG only care about money from ‘whales’, as they’re termed.

I could go on and dance around the issue longer but the real truth is this:

Melting pledges to get other ships doesn’t help CIG make the game. Melted money, credit, or ‘old money’, whatever you choose to call it, is money that CIG have already spent; on wages, tech, workstations, building space, concept artists, server costs, etc… This money is gone. It costs money to make games, CIG need money to continue to operate, and if the only difference between new money and old money is LTI, well…

Let’s briefly talk LTI. LTI signifies lifetime insurance on the base ship i.e. the hull of the ship and its default components. Would you like insurance on your cargo or upgraded ship components? Those are not included in LTI. They’re also not included in the six month insurance. It has been said a number of times by CIG that these additional insurance expenses are what will be significant, not the small base-hull insurance costs. The only difference between LTI and 6-month insurance is that LTI doesn’t run out.

CIG have also said that insurance runs down in in-game time. We don’t know how this will be counted yet and we don’t know the difference ratio between real time and in-game time, but even if the insurance on your ship ticks down one full in-universe day for any time played during that game day, you’re still looking at 182 in-game days.  To try to give you an idea what this would look like: if you played 40 hours a week (real time) and an in-game day is 2 hours of real time, you would go through 20 days of insurance per week played at that rate. Or to be put another way that 6 months of insurance would be worth 364 hours of real world time played in this scenario. From some of the discussion I’ve seen, this could be a faster time rate than the universe truly runs at - so that play time could be much, much longer.

Here’s the thing. CIG needs a steady income to continue their work, slowly but steadily creating the game universe we all are so enamoured by. Pledging new money is how the Kickstarter was successful, it was the only way to pledge for a long time, and it’s the only way CIG benefit from new ships. Adding LTI to warbond-only pledges as a way to encourage new-money sales is, for all intents and purposes, no different than Star Citizen’s original Kickstarter.

I noticed quite some time ago that concept sales just didn’t have the financial power that they did earlier on in the crowdfunding process. The king of the concept sale - in terms of sales we have concrete data on - is still the Aegis Vanguard at $2.25 million. Three years ago.  Since then most sales have languished at roughly half that total.

However, CIG has an odd situation of being a rather unconventional company in terms of income, and has occasionally let the community in on the difficulties that they have had in the past with obtaining things like leases and credit. I believe one of the things they have been able to point to is fairly consistent and reliable income over the years. Since the beginning of 2014, Star Citizen has maintained their year-over-year (YoY) income at between $32.2 million and $37.2 million. YoY income at the end of the current quarter is also projected to fall in that range.

I believe that CIG is working through ideas (longer concept sales, significant time between concept sales, significant incentives for Warbond, etc) to try to maintain or improve their income. ~35 million per year, year over year, works when your studio is not constantly expanding, but CIG is. They started out with a war chest but I expect they, at the very least, must maintain their income to continue their work.  Plus, they’re currently hiring with 76 open positions.

To their credit, this new strategy seems to be working with Hercules. Over $1 million in the first five days, with only Concierge able to purchase. I’m actually rather curious to see how much they make in the regular sale given that most of the Concierge backers will have already purchased the ship.

The two areas I have concern with related to this are:

- Gift cards should be considered new money, 100%.  It’s the logical approach and this should be fixed.

The Hercules is an interesting ship.  I like it. It’s big. It looks like it could hold a LOT of space twinkies.

It has caused quite a ruckus in the community but I feel that CIG’s approach here isn’t evil or even necessarily misguided.  CIG is attempting to continue making the game. I honestly have no concerns about their finances, but that’s because they work to maintain their income.

Finally, it’s important to remember why we all backed. We all backed for the space game of our dreams. If the cost of continued development is something as useless as LTI being offered only for new money, then so be it.  It has lived longer than expected anyway.

Thank you for reading a huge thanks to my friend Erris for working with me on this piece.