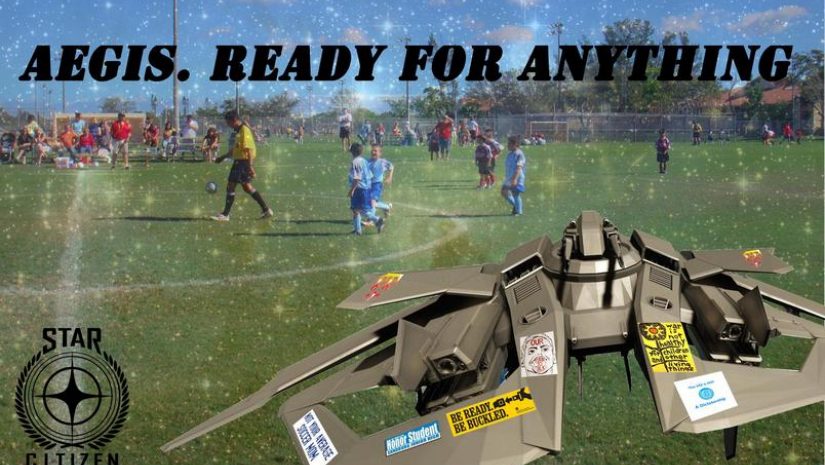 Citing heavy demand, Aegis announced the newly designed “Consumer F8 Lightning” today at an unscheduled surprise event. The new “F-Lite” has been completely retooled from the ground up to be the first in the “family” market of ships that they are coining “Sport Utility Crafts” or “SUC” for short.

While details remain scarce, we do know that the engines have been dialed down to a much more “city friendly” variant, and the weapons have been restricted to “consumer class armaments” only. Gone are the drab military paint schemes that we drooled over during the original unveiling of the F8, and in their place more refined and sporty options are now available. The flagship craft we had the chance to review was a deep piano black, with red and orange flames down the sides. Likely a nod to the custom nose art that our brave pilots hand paint on their machines, the Aegis rep. we spoke with confirmed that all details are hand painted by highly trained bespoke drones, built and designed for this specific purpose. He went on to confirm that the interior has been completely reworked allowing for comfortable seating for a family of up to 10 persons, along with storage for Sataball gear, groceries, or even that living room set you’ve had your eyes on. Whilst immediately panned by critics for being too “excessive and wasteful” due to the low fuel efficiency ratings and sheer size. The amount of positive reactions from the public became apparent shortly into the conference when a senior Aegis official confirmed they had already fielded 25,000 pre-orders within minutes of the announcement going live across the ‘verse. We had a chance to speak with one of the lucky few who was able to secure a pre-order in this first run and get his thoughts on the craft.

“Well, it just seems like an absolute beast, an ‘imperator’ of the sky.” Said famed celebrity chef Buddy Covretti, who had just shown off the details of his custom F-Lite to us. “I just wanted a ship that screams luxury and attitude and this ship, this is where the attitude lives.” Another lucky pre-order went to retired Sataball superstar Lorin Letjek, who didn’t have time to speak to us but confirmed he went for the highest end “DLX” edition which boasts larger engines, a private lounge, and includes 4 years of all-inclusive crew service.

“Bringing the mighty F8 into the hands of the common man was our goal here, and it brings a tear to my eyes to see that goal finally taking shape.” The Aegis spokesperson said at the closing of the conference. Outside the gates of the estate where the PR event was held, curious citizens and critics were discussing the recent events. “Why would anyone even need a ship that large, for just dropping the kids off, it’s just a waste of UEC.” Said one man. “Absolutely, idiotically priced” said Bob Johnson, local waste disposal engineer. Aegis confirmed the pricing for the base model would start at roughly 250,000 UEC all the way up to 2.2 MILLION UEC for the DLX model.

Stay tuned to Ships and Shapes for even more exciting news on the F-Lite!