Racing Bible: Old Vanderval Written Friday 19th of February 2016 at 07:08am by Nehkara

Hello Citizens! We have today an article from one of The Relay’s newest contributors, Captain Kasch, about the Old Vanderval racing track! While there are many reasons Star Citizen appealed to me, there was one...

Hello Citizens! We have today an article from one of The Relay’s newest contributors, Captain Kasch, about the Old Vanderval racing track!

While there are many reasons Star Citizen appealed to me, there was one that stood far above the rest. Racing. The idea of being a spaceship racer, blasting through the galaxy, competing for galactic fame and fortune was like something straight out of a Sci-Fi novel, and the prospect of living that dream is still something that entices me day after day. Within my first seven days of going round the track from a complete standing start, I had taken a top 20 spot on Old Vanderval and a top 10 spot on Rikkord Memorial. If you’re anything like me and you love the idea of racing spaceships, then this is the place for you – the absolute beginners guide to racing in Star Citizen.

I’d like to preface this by saying that racing in Star Citizen has the same dynamic as slamming your head into a wall over and over again. Either the wall will break, or you will. I’ve been around Old Vanderval about a million times and it took me some intensive training to even be able to get through it without dying. Racing is just straight up hard and it’s easy to get disheartened early on, but once you pick it up, your improvement starts to get exponential, your times will shrink hugely and you’ll earn a whole lot of REC doing it, so it’s a win-win. Naturally, when you start hitting top times you’ll plateu in terms of progress and start to focus on shaving seconds off your times, but that’s just about as rewarding.

If I haven’t scared you off yet, then you’ll want to get started. Well, to do that you’ll need a ship – but which one? You have a few choices here but if I’m honest, there’s only one real way to go. Assuming you have one of the starter packs that don’t include a racing ship, you’ll want to earn one without spending money. Easy enough, head into arena commander and play Co Op vanduul swarm until you have 5,500 REC. If you don’t know how REC works, it’s pretty simple – play Arena Commander games (not drone sim games!) to earn some REC, spend your REC on the Star Citizen website to rent ships. Each purchase gives you 7 days of owning the ship, split into seven blocks of twenty-four hours, and each block starts when you log in. So when you don’t log in, the timer won’t start and you’ll have saved a day. Hurray! Furthermore, when you rent the same ship again, you add another seven blocks of 24 hours to your remaining time. So, why Vanduul Swarm? Well, it’s the easiest way to earn REC without a specific ship – it doesn’t really take long to make 5.5k REC and you can get some flight training done in the meantime., so it’s a win-win situation. Once you have the REC. I strongly suggest you buy the Mustang Gamma. It’s the ultimate racing starter ship – fast, agile, with a bordering-on-broken boost pool that will last you three laps around Old Vanderval, making it the defined meta game of the track, since no ship has the same potential (other than the Omega, a limited edition Gamma variant with an even larger boost pool.)

Now, here you might be saying “but hold on there! What about the P-52 Merlin! That’s even cheaper but it’s slow so it’s easier to learn!” Well, sure, you can go for the Merlin, and it is slower. But here’s the thing; Ships have very defined feels to them. The Gamma has a very well defined, agile feel to it whereas the merlin is a little more weighty, and a pretty floaty ship to fly. This wouldn’t really be that big of an issue but you’re not going to win any REC flying around the track in the Merlin, so it just makes it a real pain in the ass to eventually work your way up to the Gamma, and the longer you spend in the Merlin, the more “alien” the Gamma will feel – since the Gamma is the best ship for Old Vanderval, and very viable in Rikkord Memorial and Defford Link, you’ll be flying it for a long time, so getting comfortable with it is a huge bonus. Okay, let’s get back to the racing stuff.

By this point you should have a Gamma in your inventory, so head over to Arena Commander, and then Drone Sim, boot up Old Vanderval and zoom in with your shiny new ship. Drone Sim, for those of you who don’t know, is essentially practice mode – you can’t set an official time on the leaderboard but you can go around the track as many times as you want and you get feedback on each lap time. So you’ve loaded in – first things first, pre flight fun. Go ahead and hit X to ready up and start the countdown, and then make sure you disable G-Safe by hitting CTRL+Caps Lock. G-Safe is a built in feature that limits your maneuvaribility in favor of not blacking or redding out, and it’s usually pretty useful, but racing is all about pushing yourself to the very limit, so failsafes have no place here.Once you’ve disabled the G-Safe, the countdown has completed, and the race has started, go ahead and push your throttle up to what ever you’re comfortable with and take some time just going real slow like around the track. I could try and describe the correct route to take around the gates, but that would look something like this: “Go through the first gate, go over the thing to your right, powerslide a loop around the second gate, fly through the gap to the third” and so on – pretty useless and a waste of everyone’s time, so here’s a video showing the optimal route around the track;

If you follow that way round, you won’t be going any faster. But for now, take it really easy and get comfortable with the ship and where each gate is, as well as how each corner should be taken. Full disclosure, this is probably one of the hardest parts of racing and it can take a long while – the issue I found is that when you crash into every other gate, you don’t really have any sense of flow and respawning at different points, trying to navigate your way back on track, can be a real pain in the arse. But becoming fluent in the track is pretty much essential – knowing exactly (on what is basically a subconscious level) where to go allows you to focus more on how each gate should be taken, which is the most important part. 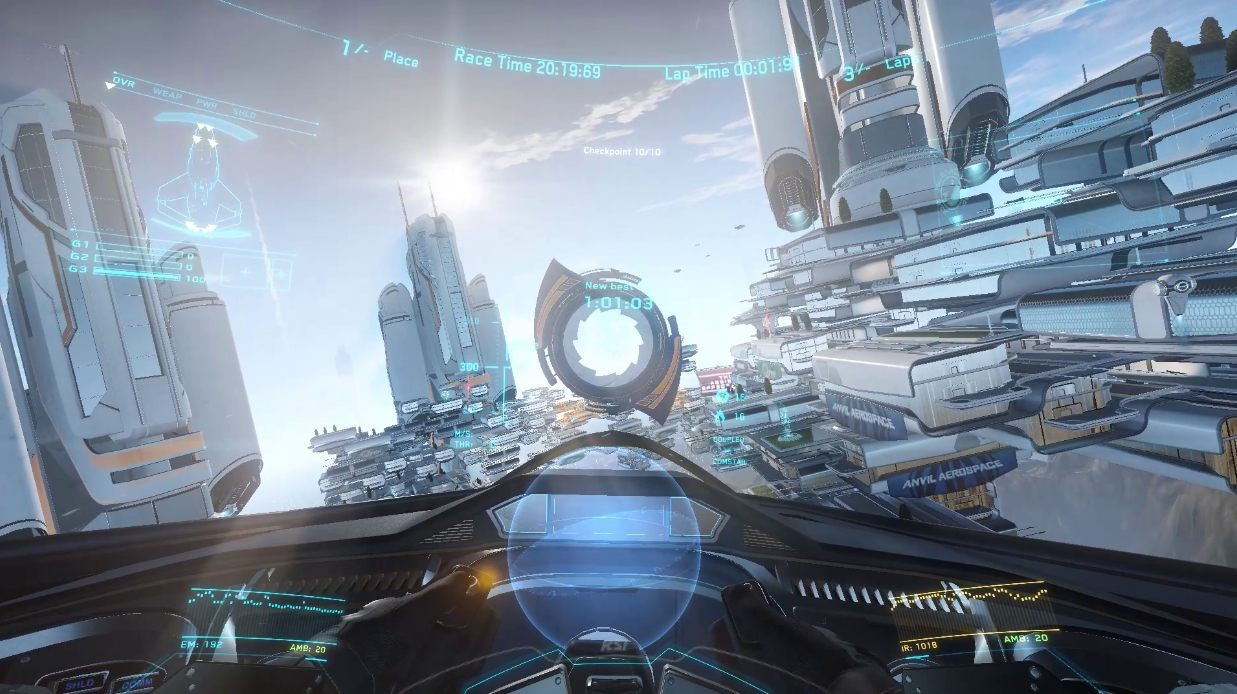 So – you’ve spent ages going around the track nice and slowly, and now you know where everything is, what’s next? Well that’s kinda obvious, isn’t it? Go faster. Bump up the speed some more and try and pin down the optimal route, until eventually you can competently go around the track three times at full throttle. It shouldn’t take you too long to get this down, and once you’re comfortable with it you’re in a really good position to take it to the next level. “But Kasch!” I hear you say, “I’m going the max speed! What is the next level?” Well, for some reason they made “boosting” ships super hidden and awkward to engage. Basically, if you double-tap the Shift key, holding it down on the second tap, you’ll see a huge increase in speed – from 270m/s ish to over 400m/s. The Gamma has such a huge pool that you can do this all the way around the track three times, so that’s what you’ll want to do. It can take a lot of practice because it’s such a huge step up, but the gap shouldn’t be nearly as bad as going from absolute beginner to being able to go around the track. The fortunate thing is, once you do manage to get around the track at full boost, you’ll see a huge increase in speed and your lap times will go down by about ten seconds. Now it can be difficult to adjust to the speed, so my biggest tip would be to make sure you use your brakes efficiently. When you take any sort of turn, holding down the Spacebar will make the turn much sharper, and Old Vanderval is all about sharp turns.

Once you can competently go around Old Vanderval while boosting all the way around, you’re in a prime position to head out into a real race – hit up Old Vanderval on Arena Commander, get into a game, and start winning some REC. You can make anywhere between 700-1600REC per win, and winning a race can take as little as about five minutes total (including load times and waiting for players) – you don’t have to be a mathematician to know that you’ll be making a buttload of REC in no time, and mo’ REC means mo’ ships. To give you an idea of what kind of position you’re in, this patch I’ve only played 21 races and won 17 of them – and that’s without breaking my ships wings.

“What’s this, Kasch?” I hear you cry. “Breaking your ships wings? Why would you do that!” Well, my vocal little reader, simply double-shift boosting isn’t enough for a truly competitive time around Old Vanderval. Currently, there is a built in mechanic that can be used to manipulate the weight/speed calculations in the game and add another 100m/s+ to your ships top speed – it’s pretty simple but also pretty inconsistent. At the start of the race, take your Gamma and slam it into the ground, right at the edge of the starting tunnel, by holding F to lower it. If you did it right, the wings of your ship will snap off like twigs and you’ll have shed a bunch of weight without any penalites to maneuvaribility, allowing you to hit lap times of about 40 seconds. I will say that you’re now actively going way faster than the developers even wanted you to, and in turn it’s pretty damn difficult to control, but if you pull it off you’ll have a record level time.

All of this takes a bunch of practice, and Old Vanderval is literally the easiest map. Yeah. I was going to go over the other two tracks, but this guide has become seriously long already – so in later editions I’ll be going over the other ships and why they matter, Rikkord Memorial and the importance of drifting, and Defford Link for all you sadistic nutjobs who think that track is fun. Remember, to be good at something you must first be willing to be bad at it, so try not to get disheartened if you spend hours crashing and dying – good luck, have fun, and fly dangerous.