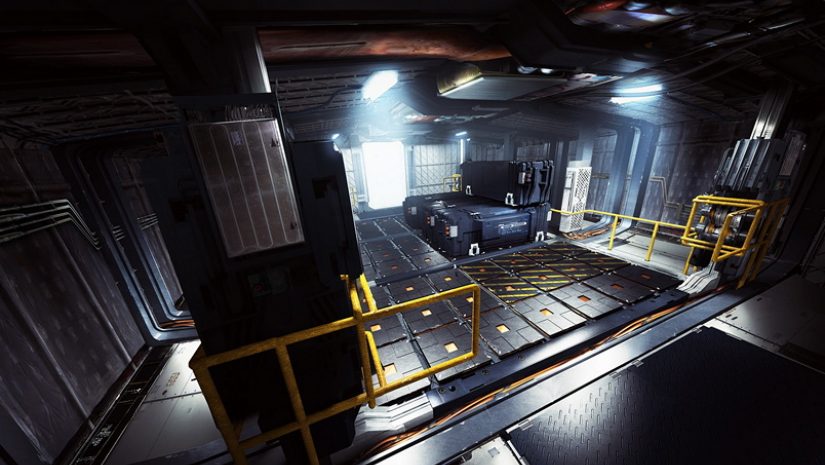 Monthly Report: February Written Saturday 7th of March 2015 at 01:40am by Nehkara

The monthly report for February is especially exciting for us at The Relay as the awesome folks at Behaviour linked our interview (by Erris) done with some members of that studio at IGDA Montreal.

In addition, years1hundred was featured in the Community section of the report for his fantastic Star Citizen career video, The Fighter Pilot.  If you liked that video, I encourage you to check out his newest video in that series, The Smuggler.

In addition to those special announcements, here are some of my favourite parts of the February Monthly Report:

Some of these bugs are memorable. For example, our light marine has a tactical shoulder lamp. After the implementation of the new item port system QA began reporting that the pilot would sometimes randomly die for no reason. After some investigation it was discovered that under certain conditions the tactical light (which is now attached with the new item port system) was colliding suddenly getting a velocity of 0 while the pilot was flying, and would then collide with the pilot at 200+ M/S and kill them.

Working with our friends at Wyrmbyte we got an early iteration of our Universe Simulator up and running. Chris Roberts was “wowed” when we shared an early demo with him.

As you will all probably know, you begin the SQ42 campaign flying off the Idris Frigate; we got our grey-box version populated with AI this month to see how it was working as an interstitial HUB and once we added a few extra crew we came up with something that felt really satisfying and believable.

Lots of effort was put towards the social module. Shops were populated, maps were refined, elevators were fixed, bar glasses were cleaned.

The designers have also been focused on tweaking weapon balance, the aiming model, and play-testing the levels. In addition to the work being done for PAX, progress continues on the new game modes and maps that will be coming after the initial release of the FPS module.

These steps will be completed by the new Community Hub that went through its design phase in February. As we announced previously, this new Hub’s mission is to give, at a glance, a broad sense of how the Star Citizen Community lives and breathes. It comes with a set of new tools and functionality that will put your involvement to the test: all fans will get a chance to show their own vision of the project through what will essentially be your hub.

Speaking of the Social Module, we’ve also been doing some work on improving the performance of our AI code to allow huge numbers of characters to be active at once while still retaining a good framerate.

This month we also debuted Wonderful World of Star Citizen. Hosted by the community’s own Disco Lando, this monthly show highlights videos, podcasts, and other amazing creations from the community.

I personally am extremely excited by a lot of what I read in the monthly report.  Getting an early iteration of the Universe Simulator up and running seems like such a quietly amazing milestone.  Once again I am astonished at the tremendous amount of work and progress we see each month on Star Citizen.

Another heartfelt thanks to the amazing folks at Behaviour and the Community team for recognizing us this month.  We are very humbled and will work that much harder to be worthy of the recognition.