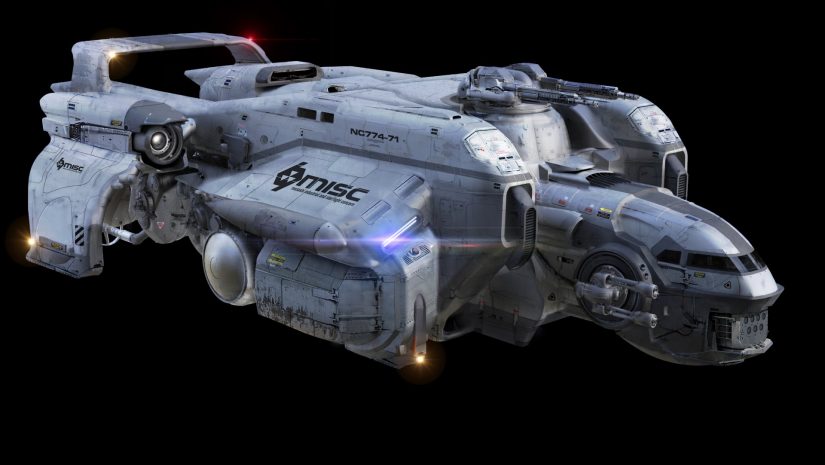 Labyrinth Logic: Design Behind the Starfarer’s Internal Layout Written Tuesday 5th of April 2016 at 09:08am by FourthOracle

When I first entered the Starfarer, I was pretty giddy; I thought I was going to have to wait until the game’s release, or at least until it was flight-ready in the PU, to examine...

When I first entered the Starfarer, I was pretty giddy; I thought I was going to have to wait until the
game’s release, or at least until it was flight-ready in the PU, to examine it of my own accord instead of
vicariously through videos. And, of course, upon entering, I got lost almost immediately; I must have
spent an hour and a half gleefully skipping around the interior and examining the many small details
and routes from one place to another while still learning the way the rooms connected.

However, while I was pacing on the catwalks between the massive fuel tanks, I asked myself:
wait, isn’t this bad game design? Won’t it be frustrating for players to get lost aboard a ship? Ease of use
is paramount in games with such a wide appeal as Star Citizen, so won’t something like this frustrate
and drive away players, as cool as it may be now?

If you haven’t seen it yet, there’s an excellent video on this very topic made by Extra Credits
about how the “best” games have a lot of depth without too much complexity, whereas the “worst”
games have very little depth but are extremely complicated. Many AAA titles make the mistake of
“dumbing down” certain aspects in order to reach a requisite level of simplicity at the cost of depth,
such as the internet’s favorite dead horse, “Call of Duty”. Star Citizen, however, is not a typical game. A
large part of its appeal lies in its delineation as a “Space Simulator”, a genre enjoyed by its fans for
sometimes arbitrary levels of complexity (“Push this button before you take off or else you’ll explode!”
kind of arbitrary). People want depth of gameplay, but they also want complexity, which runs
antithetical to much of game design.

So, a common question has sprung from this dilemma: to which audience does CIG want to
appeal, and to what extent? Or, to narrow the question: how complicated are they willing to make Star
Citizen?

But the designers at CIG are smart—they know that they can render this question redundant
because there is a way to appeal to both crowds: scaling complexity. One strong example already
implemented is the “Command-Level Stability” flight assist system, or “Comstab,” which, while
activated, attempts to move the ship in a way that greater resembles atmospheric flight, making the
game far more accessible to newer players. It allows these new players to learn the intricacies of
unfamiliar null-atmo and null-grav flight at their own pace and remove the training wheels only when
they’re ready, or maybe not at all if they don’t want to do so.

This sort of design isn’t unique to Star Citizen, of course; many racing games have automatic
shifting modes for less competitive players, and Civilization 5 allows for completely automatic citizen
management for those who prefer not to micromanage their empire. It allows for people to play and
have fun with a game without having to focus on so many small mechanics at the cost of a lower skill
ceiling. That lowered skill ceiling may be an unreasonable negotiation for some, but for those looking
for a more game-like experience from Star Citizen, these “training wheels” are a compromise that
allows them to enjoy the game. Simulator fanatics can still use them, however, as an incremental way
of learning the systems so as not to be overwhelmed with what is available to them. Teaching players
through gameplay in lieu of a manual is just good game design. It’s being embraced more and more in
the game industry, and this particular iteration is a way of putting that progression in the player’s
control.

CIG is allowing engineers to do the same thing not through any particular character controls,
but instead by controlling their environment: they can choose different ships on which to work.
Compare the aforementioned Starfarer with the Constellation: whereas the Starfarer has its components
spread out over the ship, the Constellation places every component that demands a panel in a single
room. New engineers may decide to simply fly aboard a Constellation for a while, or jump around
similar ships like the Freelancer, where they only need to know the particulars of each component and
not each component’s location. However, when they feel like taking the complexity to the next level,
they can try stepping aboard a Starfarer and familiarizing themselves with a new layer of difficulty: the
physical layout of the ship itself. This doubles as a method of keeping the game fresh for these
specialists: whenever they get bored aboard (ha) one large ship, they can find another and learn its
layout.

This is significantly different from simply increasing a difficulty level. Usually, a difficulty
level implies that the baddies just have bigger numbers, and the only way to beat them is to play better
(or get better gear, if playing an RPG). Star Citizen doesn’t have that luxury, at least in the Persistent
Universe, so scaled complexity must be created more cleverly. When stepping up to the Starfarer, the
ship might have different numbers when the component system is in place, but there is a new layer of
complexity: trying to figure out where everything is! However, as mentioned before, getting from one
place to another aboard the Starfarer doesn’t take that long if you know where you’re going, so learning
the layout will pay big returns for savvy engineers. This sort of gamplay is especially important, since
there will be no leveling system, and CIG must find a way to create many layers of depth based entirely
on how a player plays.

Despite this level of complexity, the ship designers have marked the utility of each room nicely,
even for people who have never seen the interior before. Next time you’re wandering around in the
Starfarer’s belly, note the colors present in each room. The rooms with some sort of utilitarian function,
such as the docking collar, the turret rooms, and the Jefferies-Tube-esque engineering hallways on
either side of the ship are colored a striking orange, while the living spaces, such as the crew quarters,
amenities, and kitchen are all tinted a pale blue and white. While it does create a strong aesthetic, it also
has a purpose in gameplay: it allows a new crewmember to familiarize themselves with the layout
faster, no manual required.

It’s easy to get wrapped up in how awesome (literally) the ships are, but I believe it’s worth
noting the intelligent design aspects as a gamer who wants to better understand the craft, no pun
intended. Just know that, while you’re enjoying getting turned around on the Starfarer, that there’s a
method to the labyrinthine madness.