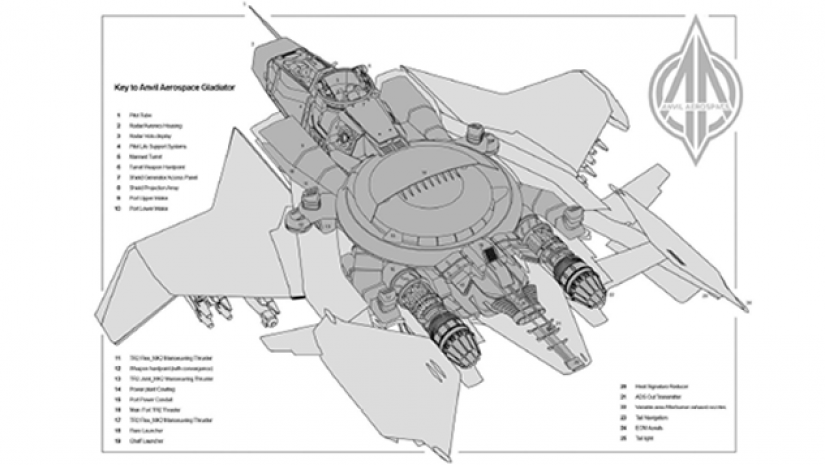 Introducing the UEE T8A Flight Manual Written Sunday 17th of May 2015 at 01:15pm by Wolf Larsen

Check out the UEE Navy T8A Gladiator Flight Manual created by NIMROD77. Every once in a while a piece of Star Citizen community contributed content comes along that truly blows my mind, and this is...

Every once in a while a piece of Star Citizen community contributed content comes along that truly blows my mind, and this is one of those instances. The UEE T8A Flight Manual, created RSI community member NIMROD77, with  support and assistance from WHITESNAKE , LEX-TALIONIS, and XEEN. At 73 pages in length, this thoughtful guide covers everything from ship operation to dogfighting tactics and emergency procedures, in a style reminiscent of military SOP handbooks published by United States of America armed forces on earth around the late 20th/early 21st century.

Every page of this document it loaded with great information on how to get the most out of the Anvil Aerospace Gladiator, but the truth is most of the knowledge is transferable across different platforms, particularly the detailed descriptions and diagrams addressing a variety of dogfighting tactics. Speaking of diagrams, the document is filled with illustrations throughout, and they do a great job of defining and visualizing complex concepts such as ‘translation effects on spacecraft flight path’ .

Here’s a full table of contents for the manual:

The scope of the document is impressive, but rivaled by the level of detail included in each section. You’ll know what I mean when you get to section 4 and see the painstakingly created tables of flight characteristics, under various configuration settings.

It’s tough to pick a favorite part, but if forced, I will have to go with the chapter dedicated to Zero-G dogfighting tactics. It’s really great to see this level of thought put into the subject and I wonder if anyone else has ever documented it at this level before, as far as space craft are concerned. Reminded that some of my favorite tactics have a name, it becomes easier to discuss them with friends. However, seeing these diagrams also makes me want to log into AC immediately, so I can practice the ones I don’t currently employ, such as the Lag Roll.

Although these are tactics which have existed for a while with atmospheric dogfighting NIMROD77’s clearly thought through the implications of Zero-G and modified approach accordingly. Any organization seeking to employ fighter escorts should list this manual as ‘required reading’ for their  crew members dedicated to space combat. I know this will be the case for any fighter pilot I hire…

Check it out for yourself here: