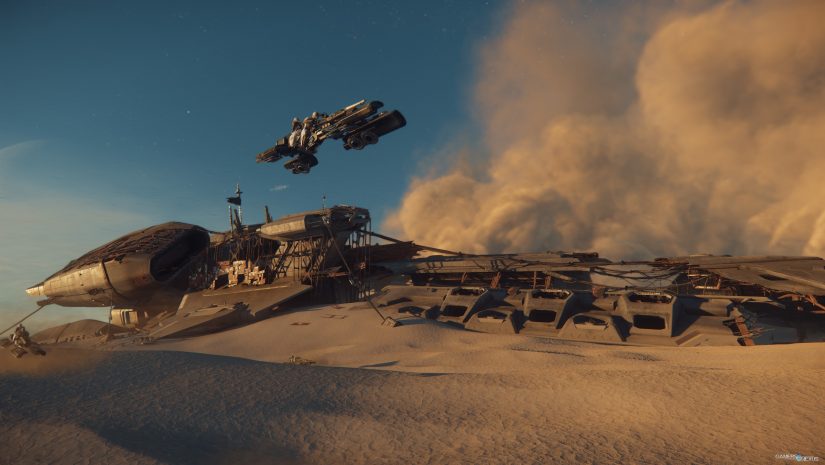 Greetings travelers. In part one of this series we discussed the history of procedural planets in Star Citizen, how they’ve developed the technology and what they’re planning to do with it. In this installment, we’ll take a look at how player housing, or “homesteading” might help to utilize all that real estate.

Player housing: in the world of massively-multiplayer online games, it’s often a divisive topic. Some players simply don’t care, and find the idea of having a “home” for their virtual identity so much unnecessary fluff. For the players who do care, though, a game that can give its players a place to feel at home can help not only to create a sense of connection and belonging in the game world, but it can also foster long-term enjoyment of and commitment to that world.

Whenever the topic of player housing done well comes up, for many gamers three letters come immediately to mind: SWG. Star Wars Galaxies featured one of the most robust housing systems in the genre, even allowing players to build and populate complete cities. Most players of the game have extremely fond memories of their time as members of the various virtual communities there, even if they took issue with other elements of the game.

We don’t yet have a great deal of information from CIG on their plans for player housing, or as they have referred to it, homesteading. In addition, as with many things during the course of Star Citizen’s development, some of the things we did know have changed. Ten for the Chairman episode 46, from November of 2014, featured this statement from Chris Roberts on the subject:

“We're definitely going to let you acquire real estate on planets/locations, not sure if it'll be on every one, but maybe just the developed planets at first, like there might be a hangar you can buy on a nice planet, or a penthouse with a view or something. Longer term we want to have procedural new areas on planets that might be habitable, a settlement might get started, and might grow over time sim-city style. Longer term players might be able to have their homestead on it and stuff, but that's not day one. Definitely longer term we'll be doing this, it'll be quite fun!”

It seems fair now to question the portion of this statement that indicates that these plans are “longer term” and “not day one” - in light of the changes to the plan for procedural planets since this answer was given, is this still the case?

“ ...the planetary tech that we’re rolling out, the v2 stuff I’m really excited about -we’ll show you at CitizenCon - is allowing a lot more opportunity for different play experiences, as you can see here, so it’s not just dogfighting - there’s a whole bunch of other stuff and it also doesn’t always have to be about combat. Ultimately in the future I think if you wanted to go find a little spot on a planet and make a little homestead, we’re gonna let you do that. I mean we’ve got a huge amount of real estate now to play with.”

As we know, plans for the CitizenCon presentation were altered considerably in the days leading up to the event, and while they still sometimes referred to the demo shown there as the “Homestead” demo, what we saw - while very impressive in other aspects - gave little clue as to CIG’s current intentions for players hoping to own a piece of all that real estate.

October’s Monthly Report did offer one tantalizing glimpse at what appears to be modular buildings, but it’s unknown whether these are intended to eventually become part of the homesteading system.

Obviously, player homesteading is on CIG’s radar. While it certainly shouldn’t yet be their primary focus while so many core gameplay systems are still deep in development, we know from past experience that allowing players to have a space that is “theirs” fosters both a connection and commitment to a game, and knowing that homesteading is in CIG’s plans is reassuring to those of us who value that sense of connection and, yes, immersion.

So just what might we eventually expect from this system in the future? We know that the ability to own hangars both aboard space stations and in cities is coming, and there have been multiple mentions of the possibility of apartments and other such spaces in the game’s hubs. Once players are able to stake their own claim in the wilds, though, what exactly might they be building? If you’ll indulge me in some theorycrafting:

I’m sure you can think of many possibilities not listed here. Once you start thinking about the options that might be available in a system like this, it’s difficult not to get excited about the prospect. Of course, there are countless details yet to be determined: How do we acquire plots of land? Are they first come, first serve? Once we have them, do we pay rent? Could we charge others rent for the use of them? Will we be able to congregate close together to create towns and cities? The list goes on, but if CIG’s history can tell us anything, it’s this: if they’re going to do it, they’re going strive to do it well, and they won’t take shortcuts to get it out the door. We can be certain that Chris Roberts and company will work to make homesteading in Star Citizen a robust and well-crafted experience. And that it’ll be ready… when it’s ready.