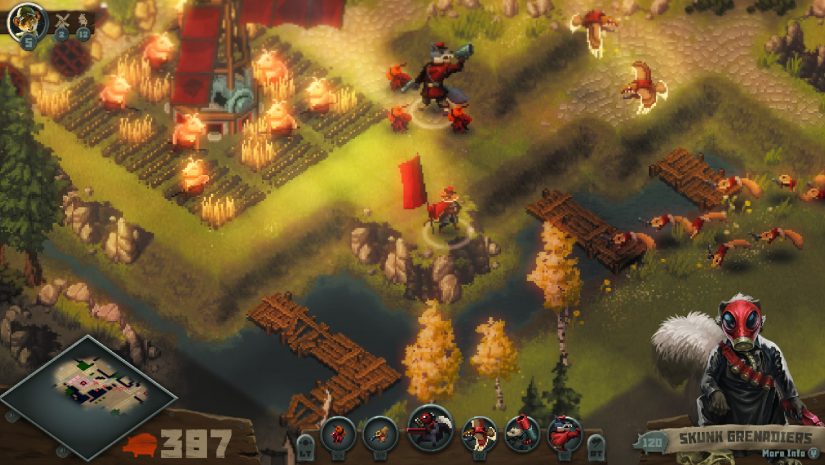 Since the release of 1992’s Dune II, real-time strategy games have had a huge accessibility problem. Between the micro, macro, build orders, hard counters, soft counters, and hotkeys, it has always been a hardcore genre...

Since the release of 1992’s Dune II, real-time strategy games have had a huge accessibility problem.

Between the micro, macro, build orders, hard counters, soft counters, and hotkeys, it has always been a hardcore genre with a wickedly high skill ceiling.

The developers at Pocketwatch Games – already known for their award-winning co-op stealth action game Monaco – are aiming to break down these barriers in their second commercial release, Tooth and Tail. Hallmark genre features such as base-building, unit selection, and frantic camera movement have been completely done away with. Instead, the player’s view and controls are centred on a commander unit that the player moves directly, via either WASD or a gamepad’s left stick.

When the game starts, each player’s first task is to place Farms around his or her Gristmill in order to provide a steady stream of Food, the game’s sole resource. Each Farm becomes permanently exhausted after five minutes – once this happens, the player will have to find and claim another Gristmill on the map. Aggressive base expansion is a must.

After amassing some Food, players can then use it to construct buildings, which can either endlessly spawn units or fulfil defensive roles. If a player is, say, busy raiding an opponent’s Gristmill, his or her base will need turrets and barbed wire to stave off counter-attacks. Players are eliminated from the game once their Gristmills have been destroyed.

My 1v1 game only took around ten minutes to complete – to compare, I would just be hitting the Feudal Age in Age of Empires II or picking some early fights in StarCraft II at this point. However, I was impressed by how much action and strategy Pocketwatch was able to cram into that time – I was always either expanding, attacking, or regrouping. No resource-gathering, unit-queuing, tech-researching nonsense. Just fun from start to finish.

To preempt concerns that the game won’t have competitive potential, the developers have posted some YouTube videos showing some higher-level gameplay (with commentary). Given how intricate, watchable, and short each match is, Tooth and Tail could very well become a wildly successful spectator sport.

Despite its gorgeous visuals and tight gameplay, Tooth and Tail is still in pre-alpha and quite far from having a set release date. It has so far been confirmed for release on Windows, Mac OS X, and Linux, but it would be a real shame if console players weren’t also able to experience this fresh, friendly take on the old, cruel real-time strategy archetype.