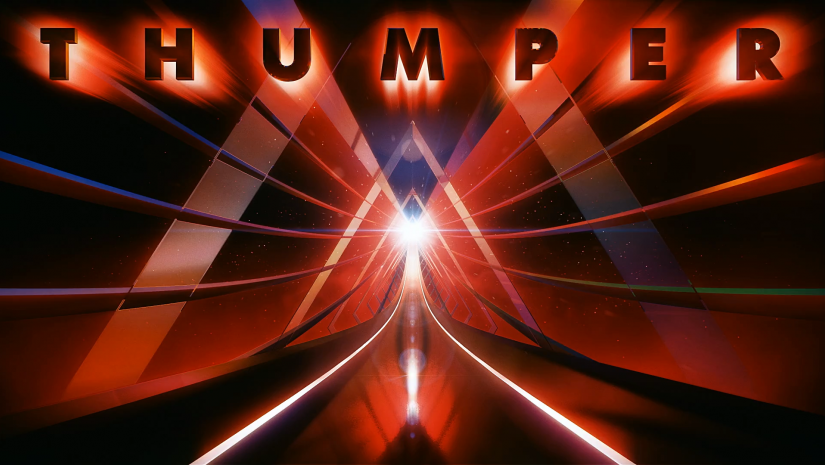 Several weeks before PAX East 2016 I received an email about a game pitched to me as ‘Rhythm Violence’. I instantly scheduled an appointment to see Thumper. Thumper is self published title, and the first...

Several weeks before PAX East 2016 I received an email about a game pitched to me as ‘Rhythm Violence’. I instantly scheduled an appointment to see Thumper.

Thumper is self published title, and the first game to come out of Drool, a somewhat newer studio comprised of ex Harmonix developers, so these folks have a good track record when it comes to music games. That’s not to say that Thumper is a musical game; it’s not. Thumper is more along the lines of a hell simulator, and that’s awesome.

Thumper is a game I instantly knew I would like from the pitch. Walking by the booth at PAX I had to avert my eyes because I wanted to actually wait to see this thing for real at our appointment. The booth did however become the base for many jokes over the weekend as it contained what could only be described as a bed. This led to a weekend of us waiting to “get thumped on the thump bed,” but I digress.

Thumper is primarily a PSVR game and was displayed as such. To break it down Thumper is basically Audiosurf in hell. You play as a metallic beetle of some sort sliding down a track at an almost F-zero-like pace. Thumper is not a game for the faint of heart, either; you are bombarded with rhythmic noise that rises and falls in a way that can only be described as intense. The track builds in front of you as it is spit out by that stage’s ‘boss’. This is where Thumper breaks away from games like Audiosurf. Yes it is a rhythm game but it is a crafted rhythm game. If you fail to execute a segment of the track it will loop and that same segment will be spit out by the ‘boss’ again. The goal of the segment I played was to hit various markers on the track to send a blast down the track to hit the boss. This is simple at first but due to the breakneck pace of the track quickly becomes a bit of a task. There is currently no formal release date for Thumper, which will be coming to both PSVR and PC although no VR support for PC has been announced at this time. My experiences with Thumper and PSVR in general have been very positive so I highly suggest going for a VR version of Thumper, if PSVR is something you plan to purchase. This is a game that exudes intensity and playing it in any other way than VR seems like it would not do it justice. They would have to make some pretty big changes to this thing to make me not recommend it and it is definitely going on my must play list. Consider me on the Thumper hype beetle.