Hello Citizens! Welcome to another episode of DevChat, this time covering July 26th and 27th! First, a brief explainer. DevChat combs through the RSI chat logs, and picks out any interesting comments made by Devs...

Welcome to another episode of DevChat, this time covering July 26th and 27th!

First, a brief explainer. DevChat combs through the RSI chat logs, and picks out any interesting comments made by Devs. It amalgamates them, and puts them here, with quotes. While I try to provide context to the comments made by Devs here, these comments sometimes have a very off-the-cuff nature, and everything here should be taken, maybe not with a grain of salt, but for what it is. Interesting, helpful, though not always 100% official, information.

Not too much news on the 26th (as it should be. Devs need weekends too). But we do hear a few things from Disco Lando, who hung out in chat while videos for the next 10FTC and WWOSC were rendering and uploading.

(8:32:22 AM) CIG Disco Lando: Been editing 10FTC and WWOSC. Just rendering them out now. I might actually get most of my Sunday this weekend.

Lando does mention that the Reliant won’t be too far off; sometime this year probably, and that the Redeemer and the Banu Merchantman won’t be in 2015.

(4:50:38 PM) CIG Disco Lando: Everything else for the initial drop of 2.0 will be determined by what’s available when we’re ready to go.

One interesting bit about the new launcher that we saw in the 1.1.5 PTU, and will hopefully see go live in patch 1.1.6, is that the new launcher uses torrent tech to download the game. If you copy the game files you currently have over to the new download location, you won’t have to re-download the entire game. Hopefully CIG make note of this when the news launcher goes live.

(10:20:46 PM) Keegan-CIG: @Debido The new launcher I wrote the backend for uses torrent tech to download the game. So if you just copy the game files you already have into the download location, it’ll diff those.

To make up for not too much news Sunday, on Monday there was quite a lot of information.  Especially if you’re a fan/owner of the Vanguard.

While the exacts of the nose gun setup for the Vanguard are still being worked out, they’ll likely stay as fixed weapons, but they could still be interchangeable for same-size guns.

(5:31:12 PM) Xareh: There’s a lot of discussion on right now amongst owners as to the purportedly fixed nose, with the M4As we can’t get rid of. Is this actually a thing or not?

(5:32:09 PM) CIG Matt Sherman: The exacts of the nose setup are still being fully sorted out. It is looking like they’ll stay fixed weapons, but could still be interchangable for the same sizes.

The main gun on the Vanguard is projected to be size 5, which would mean 70mm barrels. Keep in mind, however, that what is/isn’t locked to a ship is still being determined, so don’t take anything as 100% locked in for the Vanguard (or for any other ship, really).

(5:52:26 PM) CIG Matt Sherman: Yes, the current projection has the main gun on the Vanguard as a S5 which would be 70mm barrels.

(5:52:52 PM) CIG Matt Sherman: And the ammo size/volume/etc is something we’ve been considering with the damage system rework, so it won’t be total handwavium/etc to make it work.

(5:54:22 PM) CIG Matt Sherman: What is/isn’t locked to a ship is still being determined, so don’t take anything as 100% locked in for the Vanguard. 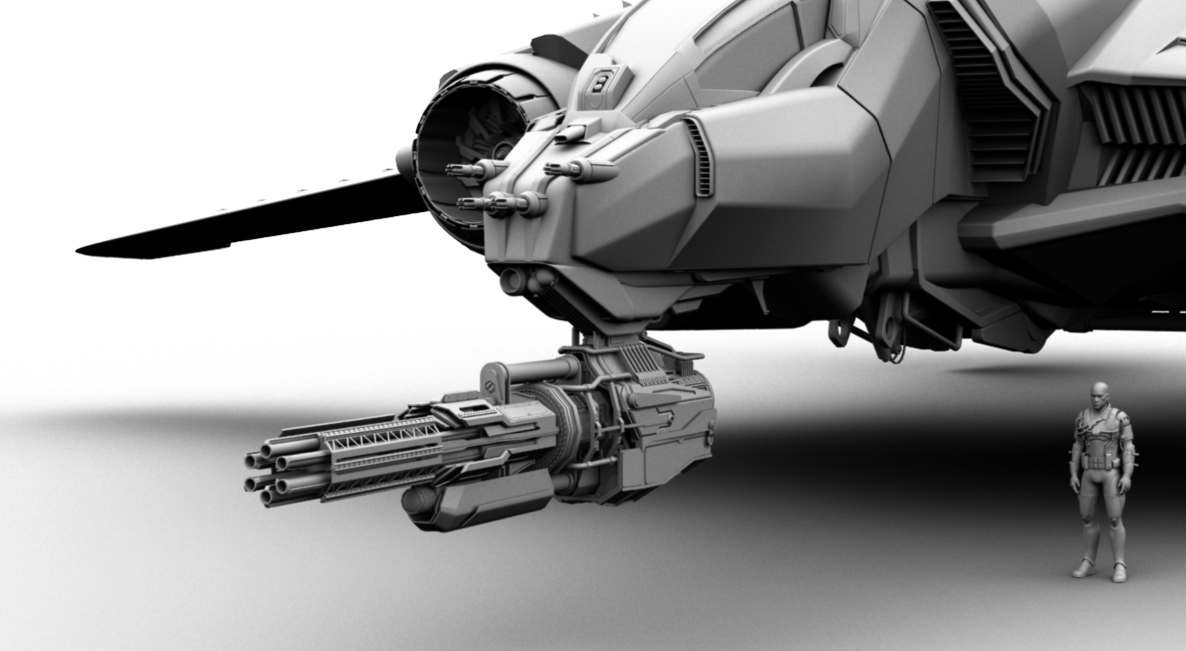 The Vanguard, like any other ship, will have strengths, weaknesses, and different behaviours. What it won’t have is brittle armour. While the final details of the Vanguard’s armour are being worked out, it sounds like a Vanguard could do a strafing run of something like, say, an Idris, and should be able to survive at least one attack pass. Whether it would be in good enough shape for a second pass is up to the pilot.

Keep in mind though, again, that every ship will get tuned, and nothing can be compared until it’s all in-game. Also, don’t expect any ship to be some ‘win’ ship.

(8:15:17 PM) CIG Matt Sherman: Vanguard is going to be fine when it goes in. Like any ship, it’s going to have its strengths, weaknesses, and different behaviours.

(8:16:33 PM) CIG Matt Sherman: Nope, never said brittle when we talked about armor on the 10 for the designers.

(8:17:23 PM) CIG Matt Sherman: It can definitely get its armor chunked doing a straffing run against a cap ship, but it’s not going to be something where it can’t survive the attack pass.

(8:18:01 PM) CIG Matt Sherman: And the nose gun is a S5, it’s not going to be weak by any means, especially once physically based damage gets rolled out.

(8:28:09 PM) CIG Matt Sherman: As for how armor will work out, the final details are being sorted, but like if you’re flying a Vanguard into a hard-target ship, anything between a Connie and an Idris, and say that target has a pair of SH’s on support, you should be able to survive and make that attack pass, but you’ll need to really question if you’re in good enough shape for a second pass.

(8:32:54 PM) CIG Matt Sherman: Every ship will get tuned, but don’t expect any ship to be turned into some defacto-win ship.

A bunch of news relating to different aspects of ships here. First off, it sounds like Calix is working on acceleration for ships.

(5:32:07 PM) Kelemdros: Hey Matt, previous to this patch Calix said the new accelerations would be 15g on the top, most ships under 10g, some of the changes were delayed for another patch?

(5:32:39 PM) CIG Matt Sherman: I know Calix is still working on the acceleration stuff, but not sure to what extent it was setup for 1.1.5 and what would be a later patch.

While they don’t make much of a difference in AC currently, the various signature and sensor types sound like they’ll be useful and varied in the PU.

(6:14:33 PM) CIG Matt Sherman: Nah, they just wouldn’t have an EM signature, doesn’t mean they’d vanish from LoS or IR, and doesn’t take into account sensors that may be reinforced to work in environments with high levels of background emissions.

(6:17:35 PM) CIG Matt Sherman: Dunno on the absolute extents of the sensors right now, but like anything else, there’ll be pros/cons costs/benefits to everything

(7:45:49 PM) CIG Matt Sherman: Whee, step one of the retrofit planning is set for all the flyable ships. Fun with prototyping it out.

(7:46:10 PM) CIG Matt Sherman: How the new component system will apply to all the existing ships.

Ballistics tuning is an ongoing process. There is no ‘magic bullet’ fix to any issue related to balance, be it weapon balance or otherwise.

(6:03:01 PM) CIG Matt Sherman: Ballistics aren’t being based purely on rail-launchers just because we need to keep the projectile speeds in workable ranges and still make sure actual Mass Drivers/Railguns feel appropriately powerful.

Through-and-through shots are problematic for CIG, because of the interior/exterior setups of the ships, but they do have plans for varied ammo load types. Also, your weapons will probably lock right before you engage Quantum / Jump drives.

(6:06:50 PM) CIG Matt Sherman: Through-and-through shots are actually more problematic because of the interior/exterior setups of the ships, but we definitely have plans for varied ammo load types.

(6:07:22 PM) CIG Matt Sherman: Your weapons will probably be locked out right before you could engage the QD/JD to hard-prevent those situations.

All projectiles will have finite lifespans, by necessity.

(8:22:23 PM) CIG Matt Sherman: All projectiles are going to have a finite range/lifespan, but a lot of that is more a technical nessecity.

(8:22:41 PM) CIG Matt Sherman: Tracking an unending stream of projectiles, even if just ballistics, would be really messy.

Some clarification on 10 for the Chairman news, any sort of ‘hunting’ content would be long-term goals. Not something for the early launch.

(6:50:27 PM) CIG Matt Sherman: Well, just going over the 10ftC, keep in mind, CR was saying that hunting stuff would all be longer-term content, not something that’s needed for the early launch/etc.

(6:52:01 PM) CIG Matt Sherman: Not surprising, not every planet/etc is going to be some ultra-controlled wildlife sanctuary, and even in current IRL, people can get hunting permits just fine along with normal seasons/etc.

The 1st/3rd person debate is how they’re merging animations. What you do in 1st person, the person aiming at you sees you do in 3rd.

(7:49:41 PM) CIG Matt Sherman: Something that may have caused confusion on 1st/3rd person stuff is how we’re merging the animations, but that’s more to make sure what you see in 1st person, the guy aiming at you sees from 3rd

Well folks, that’s it for this episode of DevChat – Watch The Relay for more episodes every few days!