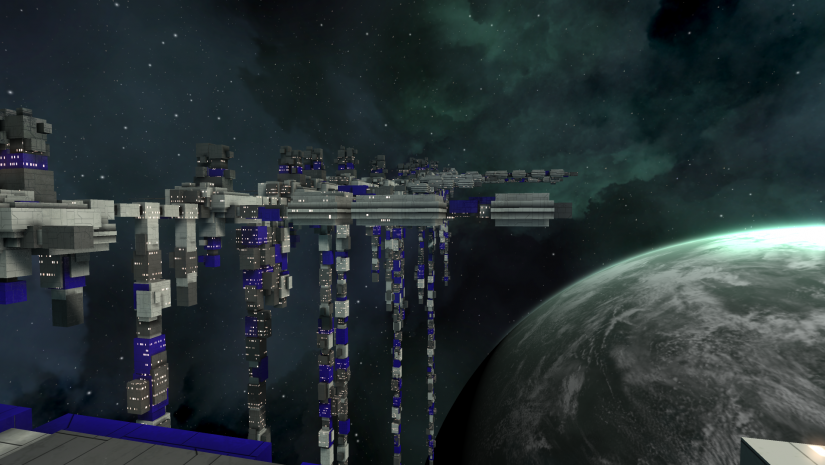 Avorion – Kickstarter Preview Written Wednesday 11th of May 2016 at 01:31pm by Erris

Avorion is one of those Kickstarted games that you hear about way too late, back immediately, and then really hope it hits its goal. A fully procedurally generated universe, Avorion reminds me a surprising amount of...

Avorion is one of those Kickstarted games that you hear about way too late, back immediately, and then really hope it hits its goal.

A fully procedurally generated universe, Avorion reminds me a surprising amount of Minecraft, albeit in space. Before I get any further though, I think I should mention one of the most impressive, and reassuring, bits – there is currently a Demo available.

Suffice to say, I think you should check that demo out. You’ll probably be impressed. I feel I should also mention that I have pledged for the game, and I hope it succeeds. It’s exactly the kind of game that really intrigues me, and gives me a sense of wonder at how much can be done on so small an engine.

When you first start off in the Avorion demo, you start off in a small little ship, made up of a handful of blocks, equipped with two simple mining lasers, and you’re told to go out and mine some asteroids. WASD controls your forward and sideways movement, Z and X control your roll, and spacebar makes you super-accelerate. You take out your little tiny mining ship, head into the asteroid field, and start mining out some orange-flecked asteroids, indicating they’re rich with Iron. The asteroids come apart in huge chunks, no fancy voxel-driven mining here, with large clumps of iron flying all around as you break apart the asteroids.

So you collect your iron, as much as you can, and then the game tells you, hey, you can build your ship now, so you go into the build menu, and you start building out your ship, and I don’t even care any more that the asteroids look a little wonky and break apart in giant chunks. I get to build myself a spaceship. Sure, it’s built out of giant blocks, and sure the first time I was building my ship I had no idea what I was doing so I ran out of money and was floating around in a half-finished deformed and barely flying menace, but it’s FUN.

There’s more to mention as well. Ships have momentum (the number of times I crashed into an asteroid while trying to mine it, or into a space-station while trying to dock, is frankly slightly embarrassing), you can hire and assign crew to various parts of your ship, ship parts take damage and need to be repaired individually, and ships can get MASSIVE. The selection of weapons is pretty limited right now, a mining turret, a laser turret, and a chaingun turret is all, but the selection of other parts for your ship, from solar panels to provide extra power, to cargo-bays to store extra resources, provide a great number of options for building your ship out already.

There’s more planned for Avorion too. Trading, diplomacy, multiplayer, the works. And the demo as it is now gets more in-depth too; I’ve barely even scratched the surface of it. But the surface that I have scratched, from that surface the game looks like a fun, interesting, and expansive universe to delve into, especially if you’ve always dreamed of being able to create your own spaceships.